On the Edge of “Acoustic Graphene”

Researchers in China have crafted the acoustic equivalent of a topological insulator (TI) that exhibits the quantum spin Hall effect for sound. This is the hallmark of TI behavior in which waves cannot propagate through the bulk of the material but only at the material’s edges. He et al. have constructed a newer, more robust experimental setup compared to previous studies. As described in Nature Physics, their TI is composed of macroscopic stainless-steel rods arranged in air to mimic the honeycomb structure of graphene. Within a constant lattice structure, the radii of the rods, which are analogous to atom radii, are varied to create different regions with an interface that behaves like a TI. By launching sound waves through the material, the researchers observed that the waves propagated via the edge states along the interface. They then carried out experiments to demonstrate the topologically protected nature of such states: the acoustic waves were unaffected even when certain defects were introduced at the interface, like cavities (missing rods), lattice disorder, and bends. This acoustic TI could serve as a model system to study topological phenomena without the complications of conventional solid-state TIs. 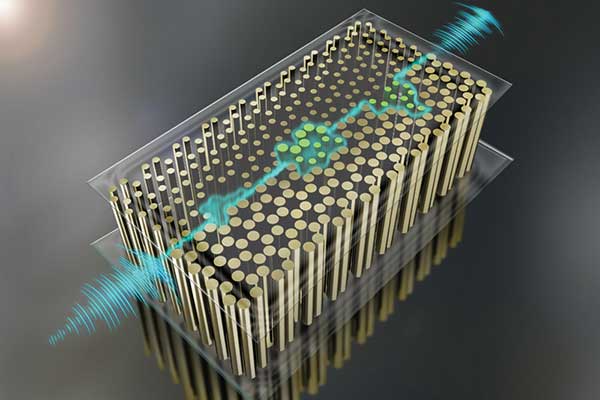 The deuterium nucleus — made up of one proton and one neutron — appears to have the same “size problem” as the proton does. In 2010, researchers studying an exotic form of hydrogen reported an unexpectedly small value for the proton radius. Now that same group, the CREMA collaboration, has performed a similar study with exotic deuterium, in which a muon takes the place of the atom’s usual electron. The larger mass of the muon means the muonic orbitals overlap with the nucleus much more than the normal electronic orbitals do. This greater overlap makes certain atomic transitions in muonic deuterium extremely sensitive to the radius of the deuterium nucleus. As reported in Science, the collaboration used precision laser spectroscopy to determine the deuterium nuclear radius to be 2.12 femtometers, which is significantly (7.5σ) smaller than previous estimates based on spectroscopy of “nonexotic” atoms, as well as electron scattering. The cause of this size discrepancy — as well as that for the proton radius — has not yet been deciphered, but one tantalizing possibility is a new fundamental force acting between muons and protons.

Digging Out the Qubits

Although quantum computers made from qubits (short for quantum bits) are thought to be the ultimate code crackers, the ability to use and apply qubits is limited by their lifespan (that is, how long they remain coherent). Known to be on the order of a few microseconds, a qubit’s lifetime is reduced by interactions with materials in the experimental setup. To combat this, qubits are usually kept as far away from other materials as possible to decrease the effects of dielectric loss and decoherence. Chu et al. investigated ways to alter the geometry of materials and interfaces that contribute to loss of coherence, and describe in Applied Physics Letters a procedure using micromachining to “dig out” an aluminum qubit. This involves removing the silicon substrate under the qubit with an ion etch, leaving it suspended over the remaining silicon in a vacuum. This methodology resulted in decreased dielectric loss on silicon and longer lifetimes of qubits than nonsuspended ones — around 60 microseconds, a factor of 10 larger than most aluminum qubits on silicon. This greater lifetime is comparable to the coherence times of qubits on sapphire, a high-quality but expensive substrate with properties that minimize dielectric loss in superconducting qubits.

Seeing What’s There by Looking Elsewhere

Two research groups have now shown that the counterintuitive technique of “ghost imaging” is not restricted to infrared and visible wavelengths, but works with x-rays too. Conventional imaging methods capture an image of an object by recording, in a multipixel detector, the intensity and color of light that reflects from, passes through, or is emitted by an object. Ghost imaging is different. It forms an image of the object by recording correlations in the intensities of two light beams, an “object beam” that strikes the object and a “reference beam” that does not. The technique builds up images by combining information from a single-pixel detector probing the object beam and a 2D detector probing the reference beam. Crucially, in this form of imaging, the object doesn’t have to receive a high dose of radiation because the object beam can be weak if the reference beam is strong. The two new studies, both published in Physical Review Letters, one by Yu et al. and the other by Pellicia et al. now extend this imaging capability to the x-ray regime. This wavelength domain is widely used in medical imaging, so the approach could pave the way to reducing the damage incurred by radiation exposure in such imaging. (For more, see the Viewpoint “Ghost imaging with x rays” by Dilano Saldin.)