October 19, 1955: Discovery of the Antiproton Announced

Scientists in the early 20th century assumed that a particle’s energy must always be a positive number. That changed in 1928, when Paul Dirac formulated an equation to describe the behavior of relativistic electrons in electric and magnetic fields. He suggested that antiparticles could exist as well as particles, each with the same mass as its twin, only with the sign of both of the electrical charge and the energy reversed.

Following Dirac’s work, the race was on to find some experimental means of proving the existence of antiparticles — and it took only four years. In August 1932, a young Caltech postdoc named Carl Anderson recorded an historic photograph: the track of a positively charged particle passing through a cloud chamber. It was neither a proton nor an electron traveling backwards; it was an antiparticle, later dubbed the positron. Despite initial skepticism from other physicists, his result was confirmed the following year. The discovery snagged Anderson a Nobel Prize in Physics in 1936, at the age of 31 — one of the youngest people to be so honored. (Dirac won the prize three years earlier.)

The success of Dirac’s theory led physicists to conclude that it could also be applied to protons — and that meant there must be antiprotons. But the accelerators available at the time simply weren’t powerful enough to create them. So at his “Rad Lab” in Berkeley, California, Ernest O. Lawrence set out to build a synchrotron machine capable of producing the 2 billion electron volts required to create proton-antiproton pairs. It was called the Bevatron, since at the time the unit acronym for a billion electron volts was BeV (now known as GeV).

There were two separate teams assigned the task of hunting for the antiproton. Edward Lofgren led one team, and Emilio Segre and Owen Chamberlain headed up the other. The Bevatron had the high voltage to produce antiprotons. The challenge would be detecting them amid the myriad other particles that would also be produced in the collisions in the ten millionth of a second between the appearance of an antiproton and its annihilation upon contact with a proton. They concluded that they needed to precisely measure two properties to make an identification based on mass and charge: momentum and velocity.

The teams opted to measure momentum using an elaborate system of magnetic quadrupole lenses. When the proton beam collided with the copper target, it would send particle fragments flying in all directions, and only those within certain momentum intervals could pass though the lens system, which deflected any negative particles through collimator apertures and blocked any positive particles.

For their velocity measurements, the physicists used scintillation counters to time how long it took particles to travel between two detectors separated by 12 meters. This would help them distinguish between pions and antiprotons, since the former would cover that distance 11 nanoseconds faster. It was still possible to get two pions mimicking an antiproton signal, however, so the physicists also brought in two detectors of Cerenkov radiation — one using a liquid fluorocarbon as a medium and the other using quartz. The first would measure the velocity of any particles traveling faster than an antiproton, while the second was designed to detect only those particles moving at exactly the predicted speed for antiprotons.

As one last safeguard against a false detection, there was one other experiment deployed. It involved photographic emulsion stacks to pick up the telltale star-shaped bursts indicative of an annihilation event from a proton-antiproton pair.

The two teams began alternating experimental runs in August 1955, although the Bevatron broke down on September 5, right in the middle of Segre and Chamberlain’s second run. Once it had been repaired, Lofgren generously gave them his scheduled beam time so they could complete their experiment. And that run proved to be the decisive one, yielding the first evidence of antiprotons.

In order to analyze all the data from thousands of particle interactions, the teams recruited human operators — such as the wives of graduate students — working with big measuring machines (dubbed “Frankensteins”) to follow the particle tracks. The operators used a foot pedal to punch the data into IBM cards. Then early computers reconstructed those particle tracks to calculate the momentum and energy of each one, enabling them to identify which particles had been produced. Finally, the emulsion-stack images were reviewed to verify any annihilation events.

All told, Segre and Chamblerlain’s experiment detected 60 antiprotons. The team announced this momentous discovery at a press conference on October 19, 1955, publishing the paper in Physical Review Letters on November 1 — just eight days after it had been submitted. Naturally the discovery made national headlines, although a reporter at the local Berkeley Gazette declared it a “grim new find,” misunderstanding the nature of matter/antimatter annihilation. Apparently he believed if a person came into contact with an antiproton, that person would explode.

Both Chamberlain and Segre were awarded the 1959 Nobel Prize in Physics for their discovery. As for the Bevatron, it would continue operating for the next 40 years, reinventing itself in 1971 as an injector for heavy ions. The beam officially shut off in 1993 and the structure was finally demolished in 2011. 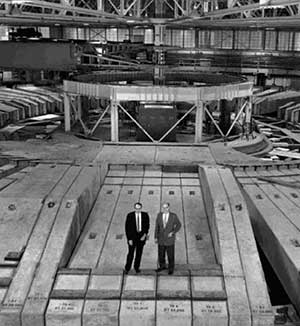 Berkeley physicists Edward McMillan and Edward Lofgren, shown here on the shielding of the Bevatron, which was used to produce antiprotons. McMillan was the co-inventor of the synchrotron.