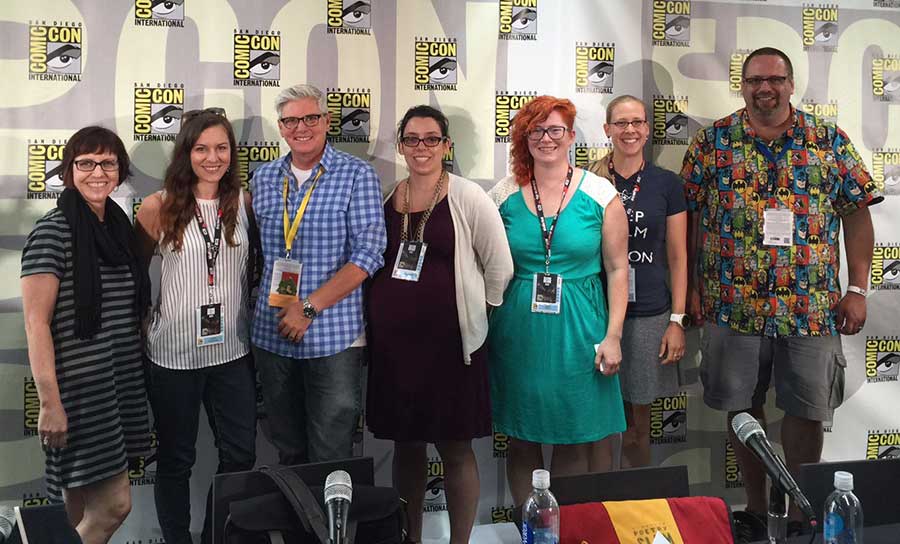 “Did you say science comics?”

A tiny Spider-Man swivels around, grabbing a stack of Spectra: The Original Laser Superhero comics from my hand. The free comics, published by APS, are snatched from the PhysicsCentral booth faster than the public outreach team can hand them out.

A crowd starts gathering next to the little superhero, watching in awe as my coworker James Roche explains the magic behind the glowing LED pins that are grabbed off the table.

“Does anyone know what LED stands for?” James asked. “It stands for light emitting diode, where the diode means that current can flow in only one direction in the circuit — like a one-way street!”

Tiny Spider-Man, once enamored of my stack of comic books, is now closely investigating his mini-LED pin, impatiently explaining how it works to his sister, dressed as Princess Elsa from Disney’s blockbuster film Frozen. I smile at them, handing over an icy-blue LED pin to match Elsa’s gown. “It’s real science in comic books!” I exclaim. “You both can read about her battles against the Terminal Twins in Spectra’s Current Crisis that will be out really soon!”

They thank me and head for the nearby DC Comics booth, where I spot a goliath on stilts dressed as an ‘autobot’ from the movie Transformers. I grab my camera and snap a quick picture, working my way through the maze of attendees of Comic-Con International. More than 150,000 people attended this year, dressed to impress and embodying their favorite pop-culture characters for the weekend in San Diego, California.

Slowly finding my footing, I take off walking toward the San Diego Public Library, where a panel discussion is taking place — Teaching STEM with Comics. After maneuvering through a gridlock of fans taking pictures of Conan O’Brian, I find my way into the 9th floor of the public library, where I eagerly sit down in the front row.

Amongst the other panelists sitting in the front of the room, Becky Thompson, the author of the Spectra comics, is prepping for her talk. As the head of APS Public Outreach, she is always eager to tell the triumphs of Spectra in the battles against her enemies, such as evil Miss Alignment and the dictatorial General Relativity, all while revealing the basic concepts of physics disciplines — such as magnetism, optics, and particle physics.

The crowd hushes as the moderator, Tracy Edmonds, approaches the podium. Giving a warm welcome, Edmonds prompts the panelists, who look keen to introduce themselves. Everyone on the panel is involved in educational comics for various science, technology, engineering, and mathematics (STEM) disciplines, and they had created numerous other characters beyond Spectra. The Solution Squad caught my eye — a comic book geared toward math concepts. A frog (which is actually a toad) waved at me from the cover of Stinky Cecil, which teaches readers about biology and ecosystems (including the difference between frogs and toads). Other panelists speak of their work with science fiction writing and science textbooks.

The overarching theme — educational comics — made me wonder how APS and PhysicsCentral ended up here in the first place. Prior to my trip, I didn’t know about Comic-Con, let alone expect that comics could go beyond fantasy and into non-fiction. But I learned our outreach team had its first booth back in 2010, aligned with the 50th anniversary of the first working laser. Spectra came alive to celebrate this special event, helping inspire the next generation of physicists in the classroom.

I'd already heard the gist of Thompson’s talk many times, as Becky helped me refine my pitch about Spectra for our booth. But at Comic-Con, I had an “aha” moment when I heard her take on the impacts of Spectra in the classroom:

“When I talk about physics, people’s eyes often glaze over … which unfortunately is a normal response. I knew [that] to grab children’s attention, APS needed to do something different. That’s why APS decided to use the comic book format — because storytelling keeps students turning the page and learning … also because there’s plenty of physics that is better conveyed visually.”

Thompson continues, “What got us the support of the APS membership was giving [them] Spectra, free of charge, and encouraging them to bring it home to their kids as comics. We found that when it was their own families enjoying the science, none of the data was as persuasive as the president of APS having their grandchild explain the history of the laser with the help from Spectra.”

Jim McClain, the creator of Solution Squad and a middle school math teacher, leaned forward into his microphone to add to Becky’s remarks. “When it came time to direct my students, I wanted to make sure they had comics in the classroom too,” he explained.

He says that his comic has a cast of teenage heroes, each with a different math-based superpower: “One of my characters — Absolutia — her symbol is the absolute value sign. When she raises or lowers her hands, it represents when we have positive and negative numbers. The further you get away from zero, no matter if it’s ‘up’ or ‘down’, that’s the concept of absolute value. If you understand how she works, you understand how absolute value works — and I see my kids lifting and lowering their hands during class … that’s when you know it’s working.”

The slide shifts to the cartoon toad named Cecil. Paige Braddock, who is the creative director of Stinky Cecil, notes her experience with her biology-based educational comics. “The kids always identify with the characters in comic books. It personalizes what you’re trying to convey and engraves those concepts much deeper into their curriculum.”

“That emotional connection to the story, the characters, will always carry your teaching,” comments Mairghread Scott. She’s a science-fiction writer and script coordinator for the comic series Transformers Prime.

“I think science gets linked to the idea of ‘exceptionalism,’” Scott continues. “Kids think of science as a couple of genius people that have one brilliant moment, but real science is a progressive format. Kids can find science intimidating, but in educational comics, we have a lot of characters that access the scientific method. Kids can finally break down the idea that even though science is ‘really special,’ it doesn’t require magic powers to understand.”

At this point, it became clear that teachers in a variety of STEM fields were seeing impressive results with the use of educational comics. Betsy Gomez, an editor and content developer of school textbooks, practically jumped toward her microphone, eager to express her thoughts.

“Textbooks are very limited in their ability to engage with their readers,” she said. “Comics can be used to add narrative and help students understand the story, reinforcing the concepts and engaging them in a more personal way.”

The panel closed with numerous comments from educators, teachers, and parents, all requesting materials for their children and students. I sat quietly, wondering if there would be more panelists like these next year, waiting to tell their success stories with science comic books. For now, Spectra: The Original Laser Superhero is the only superhero that battles physics crime. I wonder who else could show up to save the day?