July 1816: Fresnel’s Evidence for the Wave Theory of Light

Until the early 20th century, the question of whether light is a particle or a wave had divided scientists for centuries. Isaac Newton held the former stance and advocated for his “corpuscular” theory. But by the early 19th century, the wave theory was making a comeback, thanks in part to the work of a French civil engineer named Augustin-Jean Fresnel.

Born in 1788 to an architect, the young Fresnel had a strict religious upbringing, since his parents were Jansenists — a radical sect of the Catholic Church that embraced predestination. Initially he was home-schooled, and did not show early academic promise; he could barely read by the time he was eight. Part of this may have been due to all the political upheaval in France at the time. Fresnel was just one year old when revolutionaries stormed the Bastille in 1789, and five when the Reign of Terror began.

Eventually the family settled in a small village north of Caen, and when Fresnel was 12, he was enrolled in a formal school. That is where he discovered science and mathematics. He excelled at both, so much so that he decided to study engineering, first at the École Polytechnique in Paris, and then at the École Nacionale des Ponts et Chaussées.

After completing his studies, Fresnel worked on various civic projects for the French government, primarily building roads. A major project was to construct a road connecting Spain with northern Italy through France. In 1815, Napoleon Bonaparte returned from his exile to Elba. But Fresnel supported the king against Napoleon, so when the latter converged on Paris with his troops, the engineer lost his post and was placed under police surveillance. He opted to return to his hometown and focus on his scientific interests instead — most notably in optics.

When Napoleon was once again defeated, just 100 days later at Waterloo, and King Louis XVIII took the throne, Fresnel’s engineering work resumed, but he continued his optics research, too. In particular, he built on the experimental work of Thomas Young, whose famous double-slit experiment was seen by many as evidence for the wave nature of light. Fresnel’s own theoretical and experimental work led him to embrace this theory as well, even though it was not favored in textbooks at the time.

Fresnel wasn’t familiar with much of work on the nature of light, but he was fascinated by diffraction. When a diffracting object such as a thin wire is illuminated, it produces a characteristic set of colored bands in the shadow. A breakthrough occurred when he pasted a sheet of black paper to one edge of a diffractor and realized that when he did so, the bright bands from the light vanished. He then devised mathematical formulae to predict the position of those bright and dark bands based on the pathlengths of rays crossing behind the diffractor. Later he used those same equations to predict the interference patterns produced by two mirrors reflecting light.

That became the basis for his 1818 treatise, Memoir on the Diffraction of Light. But Fresnel had published his preliminary results in July 1816, with the goal of fleshing out the mathematics to develop a full theory for his findings. In 1819, the French Academy of Sciences announced that the Grand Prix for that year would be given for the best work on diffraction. Fresnel jumped at the chance to share his work and submitted his full theory just before the deadline.

The judges that year included François Arago, Siméon Poisson, and Pierre-Simon LaPlace — all supporters of the corpuscular theory of light. Yet Poisson was so impressed with Fresnel’s work that he made his own prediction using the theory — namely, that if parallel light hit an opaque disk, there would be a bright spot in the center of the shadow. This was experimentally confirmed, and Fresnel was awarded the Grand Prix. It was a major victory for proponents of the wave theory of light.

In addition to his work on optics, Fresnel also worked for the Lighthouse Commission. At the time, lighthouses relied upon mirrors to reflect light, but the reflected light was difficult to see from afar, and in heavy fog or stormy weather, it could barely be seen by ships at all. Fresnel realized that since the image quality was not important, a better approach would be to use a lens, but without most of the glass inside. He designed a lens comprised of rings of glass prisms, resembling a giant beehive, with a lamp in the center. Those prisms serve to bend and concentrate light from the lamp (or other light source) into a bright beam that travels further and is easier to see, even in foggy conditions.

Fresnel’s design was so effective that such lenses continued to be widely used in lighthouses until the mid-20th century. For a time, Fresnel lenses were used in the headlamps of cars, and they are still used in taillights and backup lights, and also in solar cookers. They are also common in lighting for film and theater — not only do they produce a brighter beam, but the light intensity is more uniform.

For all his successes, Fresnel never achieved fame as a scientist in his lifetime. Many of his papers were published posthumously. He did earn the respect of his peers, and his name is inscribed on the Eiffel Tower, along with the names of 71 other French luminaries. Yet Fresnel was never one to seek out the spotlight. As he wrote to Thomas Young in 1824, “All the compliments that I have received from Arago, Laplace, and Biot never gave me so much pleasure as the discovery of a theoretic truth, or the confirmation of a calculation by experiment.” He died of consumption on July 14, 1827, at Ville-d’Avray in France.

Fresnel, Augustin. (1819) “On the Action of Rays of Polarized Light Upon Each Other,” The Wave Theory of Light: Memoirs by Huygens, Young and Fresnel. Woodstock, GA: American Book Company. 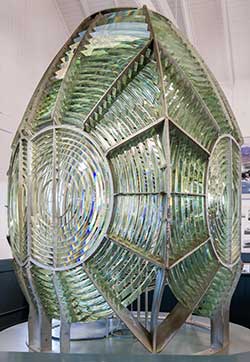 Fresnel lens at the Point Arena Lighthouse in California