NASA and ESA May Team Up to Measure Gravitational Waves

In 1975 the concept of a ground-based gravitational wave detector "was literally sketched on a napkin at a NASA review panel meeting,” says Ira Thorpe, an astrophysicist at NASA’s Goddard Space Flight Center. It was at this meeting that Rainer Weiss, then an associate professor of physics teaching a course on general relativity at the Massachusetts Institute of Technology, met Kip Thorne, a physicist at Caltech. The two men talked late into the evening about ideas for a gravitational wave detector.

What emerged from those initial conversations and many others paved the way for the Laser Interferometer Gravitational-Wave Observatory (LIGO), a National Science Foundation-funded facility managed by MIT and Caltech that started searching for gravitational waves in 2002. In February 2016 LIGO announced the momentous first direct detection of gravitational waves, which were produced by the merger of two black holes in a distant galaxy; a second such detection followed in June.

LIGO’s exquisite sensitivity to gravitational waves means that its detectors record many spurious signals from vibrations caused by, for example, traffic and ocean waves. “Ground-based detectors have a hard lower limit on the frequencies they can detect at about 1 hertz because of seismic noise, which limits them to seeing very massive objects moving very fast,” says Charles Dunn, Project Technologist at NASA’s Jet Propulsion Laboratory. Furthermore, LIGO’s ability to detect gravitational waves is limited by the relatively short lengths of its arms, because constructing extremely straight, long tubes on Earth’s curved surface is both difficult and expensive.

The next literal jump in technology will be to take gravitational-wave detectors to space; an orbiting gravitational-wave observatory would overcome both the limitations of vibrations and the difficulty of achieving long laser pathlengths. “In space, we can get down to the 0.1 millihertz frequency range, which should allow observation of many more sources, including things that can be seen with more conventional telescopes,” notes NASA’s Dunn.

In the 2000s, NASA and ESA collaborated on developing a Laser Interferometer Space Antenna (LISA), a triangular interferometer with arms several million kilometers on a side that would be launched into orbit around the Sun. However, NASA withdrew from the collaboration in 2011 due to budget cuts, and ESA continued to develop the technologies necessary for LISA. “ESA took a gamble,” says Paul McNamara, an astrophysicist at ESA and the deputy project scientist for LISA. “They wanted the science, and they spent a large chunk of money to demonstrate that it was possible.” In 2013, ESA announced a science theme of “The Gravitational Universe” for the third large-class mission (L3) component of its Cosmic Vision 2015 - 2025 program, which solidified LISA’s position in ESA’s long-term planning.

Before NASA withdrew from the collaboration, the two agencies had decided to develop a small spacecraft to test the technologies necessary for a successful LISA mission. In December 2015, ESA launched that spacecraft, called LISA Pathfinder, to the L1 Lagrange point 1.5 million kilometers from Earth. One of the primary science goals of LISA Pathfinder was to demonstrate that two paperweight-sized cubes of gold and platinum onboard the spacecraft could be shielded from all forces save for gravity. “LISA Pathfinder shows that we can put a test mass in perfect free fall, which is what we’d need to do a full-scale gravitational-wave detector,” says NASA’s Thorpe, the U.S. lead for data analysis on the LISA Pathfinder mission.

An orbiting gravitational-wave observatory such as LISA would be complementary to ground-based facilities like LIGO. “The same sources that LIGO sees in their last couple of orbits before inspiral, LISA could see months to years before they merge,” explains Thorpe. “LISA would see some of these sources first and could basically be an early warning system for LIGO and also, more importantly, for telescopes [that measure electromagnetic radiation]. That would be transformational science.”

NASA is once again entertaining the idea of officially partnering with ESA on LISA. The U.S. agency has assembled an “L3 Study Team” to see how NASA might participate in LISA. Scientists and NASA leadership also have their eye on the 2020 Decadal Survey in Astronomy and Astrophysics, which will be conducted by the National Research Council to survey the priorities of the astronomy and astrophysics community. Most major missions require endorsement from the Decadal Survey before they can go forward, and previous Decadal Surveys have endorsed a LISA-like mission. “This science is so compelling, and we’re making great strides with the technology,” remarks Thorpe. “I’d be surprised if the U.S. community didn’t want to be involved.”

Katherine Kornei is a freelance science writer in Portland, Oregon. 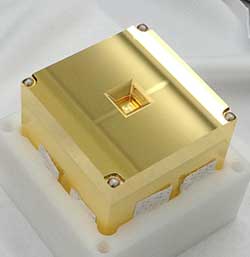 A cube of platinum-gold alloy was the centerpiece of the LISA Pathfinder test. 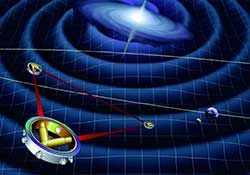