Pierre Meystre of the University of Arizona has been appointed Editor in Chief of the Physical Review research journals published by APS. Starting in mid-August 2016, he will take responsibility for APS journal content and will partner with senior leadership in setting the agenda and strategic vision for the journals. The APS Board of Directors unanimously approved the appointment, which was put forward by APS CEO Kate Kirby on June 16.

"I am honored and humbled to have been chosen to take the helm of the world's most respected physics journals,” said Meystre in a statement released by APS, “and am looking forward to working with the terrific editorial and publishing teams at APS in continuing to serve the physics community by further expanding the quality and breadth of our publications.” Meystre will be the 11th physicist to hold the position of Editor in Chief. His predecessor, Gene Sprouse, stepped down in May 2015.

Meystre is currently Regents Professor of Physics and Optical Sciences at The University of Arizona, Director of the Biosphere 2 Institute in Oracle, Arizona, Director of the Arizona Center for STEM Teachers, and has served as lead editor of Physical Review Letters since 2013. He will step down from those duties to devote full time to his new position on the APS senior management team.

He received his Ph.D. from the École Polytechnique Fédérale in Lausanne, Switzerland in 1974. He joined the University of Arizona as a professor of physics in 1986 and was head of the department from 2005 through 2007. Meystre is an APS Fellow and an optical physicist who specializes in quantum optics, atomic physics, and the statistical properties of radiation.

Barry Barish, a professor at Caltech and 2011 APS president, chaired the search committee that recommended Meystre. “We conducted a wide-ranging search to find the best possible candidate,” said Barish. “We sought someone who is a prominent member of the scientific community, as well as having a broad knowledge of physics, a commitment to the APS, and a forward-looking vision for our journals. Pierre has all those qualities, plus he will bring abundant energy and a very human approach to the job."

“Meystre’s passion for physics and commitment to the journals made a strong impression on all of us,” added APS CEO Kate Kirby. “I look forward to working with Pierre and having him involved in the leadership of the Society.”

In an interview, Meystre cited a number of priorities as Editor in Chief. “I’ll be an ambassador to the physics community in some sense,” he says. In addition, he wants to maintain and improve the quality of the 30,000 referees who support the journals, as well as strengthen communication between editors and authors.

When he starts in his new position, Meystre will be based full-time at the APS editorial offices in Ridge, NY. Until then, Editorial Director Daniel Kulp will continue as interim Editor in Chief. APS expects to begin promptly the search for a new lead editor for Physical Review Letters. 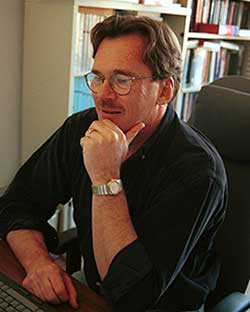