A Monthly Recap of Papers Selected by the Physics Editors

Seasonal changes in the appearance of streaks on the steep slopes of Mars may indicate that boiling water plays a role in shaping the surface.

Iron isotopes in lunar soil samples are consistent with a nearby supernova occurring 2 million years ago. 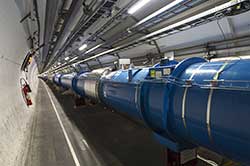 Taking inspiration from fireflies, scientists have fabricated an organic light-emitting diode (OLED) with a complex surface pattern that improves the output efficiency by 61% compared to a smooth surface. Fireflies signal to potential mates by emitting light from a photogenic region on their abdomens, the most efficient bioluminescent organ known. This organ has a specially patterned outer shell, or cuticle, with micrometer-scale tile-like features, as well as nanosized linear ridges. These surface structures help light escape from the cuticle to the air. While previous work focused on a single type of cuticle structure, Jeong et al. (Nano Letters 16, 2994) have investigated the hierarchical combination of micro- and nanostructures. They imaged the cuticles of male fireflies (Pyrocoelia rufa) and showed that the hierarchical structure reduced internal reflection. The team reproduced the firefly cuticle pattern in a UV resin that they placed on top of an OLED. Compared to a smooth-surface OLED, this bio-inspired device emitted more light and also had a wider angle of illumination.

Turmoil on the Red Planet

Experiments suggest that boiling water may be causing changes on the surface of Mars, as reported by Massé et al. (Nature Geosci. article). Recently, spacecraft observations of the planet’s steep slopes have revealed discolorations that lengthen and shorten according to the seasons. Such streaks could indicate flowing water or brines — salty solutions formed from water percolation. But in the thin Martian atmosphere, liquid water is expected to either freeze or evaporate very quickly. To simulate what may be happening on Mars, Massé et al. carried out lab experiments at pressures typical of the red planet (less than 1% of Earth’s sea-level pressure). They let a small amount of ice melt on top of a sand-covered slope, then watched the meltwater percolate downwards through the sand and boil at the interface between wet sand and air. The boiling water ejected sand grains, forming piles that collapsed, leaving dark-colored streaks reminiscent of those seen on Mars. The results suggest that even modest quantities of boiling water could be a key factor shaping the planet’s surface.

The first white dwarf with an almost purely oxygen atmosphere has been discovered in new data from the Sloan Digital Sky Survey. The oxygenated dwarf is one of about 32,000 in the survey, but its spectrum reveals an atmosphere with a unique chemistry, challenging scientists’ understanding of stellar evolution. As they age, stars with less than 8 to 10 solar masses typically become white dwarfs. These dense, Earth-sized objects form once hydrogen and helium have been largely consumed and can no longer fuel the fusion that counteracts gravity. The remaining hydrogen and helium float to the surface, where they dominate the visible emission spectrum. Kepler et al. (Science 352, 67), however, found a dwarf whose spectrum was dominated by oxygen lines, suggesting the outer layer of hydrogen and helium disappeared as the white dwarf formed. Instead of hydrogen and helium, they saw a mixture of oxygen, neon, and magnesium that is most commonly found in more massive white dwarfs, and trace amounts of silicon that are associated with the formation of neutron stars.

Lunar Iron Points to Nearby Supernova

Researchers studying lunar soil samples have uncovered high levels of an iron isotope (60Fe) consistent with fallout from a nearby supernova about 2 million years ago. Nearby supernova might be connected with extinctions on Earth. Besides emitting deadly radiation, these events also spew out elements such as 60Fe, which can settle on planetary bodies within the blast zone. Since this isotope has a radioactive half-life of 2.6 million years, finding high levels of it in a geological sample imply a fairly recent (and close) supernova. The supernova hypothesis — first proposed in 1999 — is supported by recent observations of 60Fe in the Earth’s oceanic crust. But the unworked surface of the Moon is a better record. Fimiani et al. (Phys. Rev. Lett. 116, 151104) obtained lunar soil samples from the Apollo missions. They found the ratio of 60Fe to total iron was around 1 part in 1015, which is about 10 times higher than the measured background. Cosmic-ray interactions — another possible source of 60Fe — could not account for this high concentration. (Adapted from the Physics article “Supernova Footprint on the Moon.”)