IBM Technology at Work in Africa 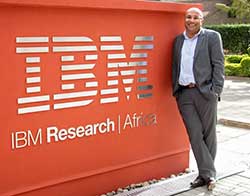 It was a bright and sunny morning in Bangalore, India, when Kamal Bhattacharya, a senior manager for information technology and cloud computing at IBM Research, got a game-changing phone call from his boss. The company was going to launch a research lab in Africa, IBM’s 12th research lab and its first on the continent. The conversation consisted of a simple query — did Bhattacharya, a Ph.D. physicist, want to take the reins and lead the charge? His answer was also simple — a resounding yes.

So in 2012, Bhattacharya and his family packed up their things and moved across the Indian Ocean to Nairobi to launch IBM Research – Africa. He arrived in Kenya with the goal of establishing the lab specifically to address grand challenges in Africa, through commercially viable innovation that impacts people's lives. But he had to start from scratch. There wasn’t a building. There were no machines or instruments or any sort of infrastructure. There were no other employees. “I had the opportunity to define what it is we wanted to do,” says Bhattacharya. “It was an ambitious effort for IBM to set up a lab of this type in Africa. I had no peers and there was no precedence.”

But as a veteran IBM employee since 1999, with experience working on four continents and in multiple roles throughout the organization, he was uniquely suited for the challenge. In particular, his diverse worldview aided him in understanding the significance of the assignment. Given that Africa was the only continent where IBM did not have a presence, there was much opportunity to be pursued here. “If we as a company want to be relevant to the world, we should go where we face the most pressing of challenges,” he says.

Bhattacharya began his effort by negotiating with the Catholic University of Eastern Africa to move into a 40-year-old defunct library to use as the lab’s main building. His partnership with a team of architects and engineers helped pave the way for the concept behind what the facility would look like. “What’s in a lab? It depends what we do,” he notes. He envisioned a data center with state-of-the-art computing systems and an open environment that fosters collaboration.

His first exposure to reframing the use of technology in developing markets was through a project to ensure that patients receive their malaria medicine on time. Through his rapidly growing network across the continent, he learned of people using text messages to track pharmaceuticals. “We are a commercial company, so when I heard about this simple solution of sending a quick message to a database to find out where the malaria medicine is, I asked ‘What’s the impact?’ and I was thinking commercial impact,” he shares. But when his colleague replied that they saved 400,000 lives, “It hit me. I never considered how we can we build technology that is commercially viable that can affect people’s lives in this way. That’s when we switched things around. I called my chief scientist and I said we are going to create a lab to develop commercially viable and innovative technologies to address key societal issues on the African continent with impact potential in the millions.”

The lab, which now employs 60 scientists and engineers, has made some considerable strides in only three years. In agriculture, the researchers have developed technology to monitor how resources, such as water, are being utilized, and to advise farmers how to improve productivity. In healthcare, they are looking at how to leverage technology to alleviate challenges at the first point of care. For example, when someone goes to a primary physician, a software program called a “cognitive advisor” will enable the doctor to better identify and treat medical problems and move patients to the next step, whether it is to send them to a hospital or provide them with a prescription.

Another key accomplishment of the lab has been the improvement of Kenya’s regulatory business environment, as measured by the World Bank. Bhattacharya and his team analyzed multiple aspects of regional and national government to pinpoint what processes could be improved to increase the country’s rank in the bank’s assessment. They scrutinized everything from how to start a business to trading across borders, and made recommendations on how to improve efficiency through both process reengineering and through technology. “In the first year, we helped Kenya increase its rank by 28 points,” he says. “This was genius work the team does — it is a lot of technology and a lot of policy and legal work. We brought together people who can understand this at a very deep level. Now we have become a trusted advisor to the Kenyan government and our approach is core to the government’s desire to make things easier, especially for small and medium businesses.”

Another interesting concept and technology developed by the lab relates to financial inclusion. Across Africa, only 20% of people have access to formal financial services. Kenya, a leader in mobile money products, is a fertile ground for experimentation on more inclusive mobile banking products geared towards the low-income population. So IBM Research – Africa engineers, in collaboration with financial institutions, built cognitive algorithms based on machine learning that provide the banks with the information they need to make a sound decision, with data gleaned from various outputs such as call records and even social media activity. The innovation “can help banks and financial services companies provide loans with much lower risk and at a much bigger scale,” he notes.

The lab has had its share of false starts, however. “Over time we have learned how to fail because some of the ideas we had were innovative but were not commercially viable, or vice versa,” he notes. Other ideas “didn’t address social challenges we cared about.”

Regardless, Bhattacharya, who received his doctorate in theoretical statistical physics from the University of Göttingen in Germany in 1998, says he is well prepared for the large-scale challenge of leading the R&D center precisely because of his education. “My way of thinking, which I learned as a physicist, was attractive to IBM. Physics strives for a simplicity and elegance and it requires you to have a common sense,” he notes. “At the end of the day, when it comes to engineering systems relevant to society, things never turn out to be as pretty as they were [in physics]. Sometimes you have to make compromises on purity because you want to get things done. Once you make that transition, a lot of complementary skills in physics and engineering have tremendous value in making the world better.”

Bhattacharya continues to press forward with innovations in cognitive technologies relevant to Africa. Last year, he launched the second IBM Research – Africa site in Johannesburg, South Africa, which is currently looking at problems in pollution forecasting and prevention. He is collaborating with organizations that IBM has traditionally not partnered with, such as the Bill and Melinda Gates Foundation and USAID. He has also initiated Project Lucy in 2013, which leverages IBM’s Watson and related cognitive technologies to utilize Big Data to improve the way of life in developing countries. “This is a new way of thinking about artificial intelligence and cognitive computing as helpful to Africa,” he says. “The true drivers of change on the African continent will be technologies, and the ability for us in Africa to take a science-driven view to impact change and make a difference is what I am most proud of. It keeps me going every day.”