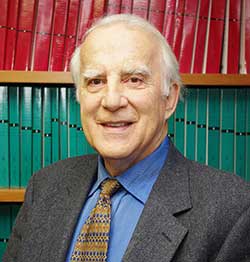 Peter Adams, longtime editor with the APS Physical Review journals, died on April 16, 2016. Adams joined the editorial office in 1969, while it was located at Brookhaven National Laboratory, where he carried out research in condensed matter physics. He played a key role in the split of the single Physical Review into Physical Review A through D, and in 1970 he became the first full-time editor to lead Physical Review B, a position he held until 2012.

During his 47 years at the APS, Adams also held appointments as deputy managing editor and deputy editor in chief of the journals. In those roles he was responsible for the design and development of a computer-based UNIX project to move all editorial operations, data management, journal-page composition, and printing into the digital era.

"When I joined APS as an editor for PRB in 1996, Peter took me under his wing,” says Daniel Kulp, Interim Editor in Chief and Editorial Director of the APS journals. “Just about everything I know about editorial work came from him. Peter was always open to sharing his knowledge and insight with the entire editorial staff. For many generations of editors, he was a mentor and a colleague."

“We are grateful for all that Peter contributed to the development and evolution of the Physical Review journals over his long career in the Editorial Office at Ridge,” adds APS Chief Executive Officer Kate Kirby.

Adams graduated from the University of Wales, Aberystwyth, and in 1964 obtained his Ph.D. in Physics from Imperial College London. He was elected a Fellow of APS in 1972, and was a Fellow of the UK’s Institute of Physics.