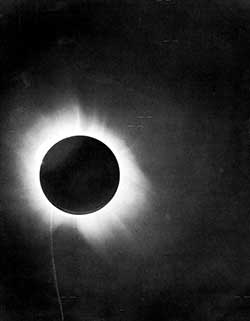 One of Eddington's photographs of the May 29, 1919, solar eclipse. The photo was presented in his 1920 paper announcing the successful test of general relativity.

When Albert Einstein published his general theory of relativity (GR) in 1915, he proposed three critical tests, insisting in a letter to The Times of London that if any one of these three proved to be wrong, the whole theory would collapse.

Once he had completed his theory, Einstein immediately calculated the advance of the perihelion of Mercury, and he could hardly contain himself when GR produced the correct result. The next classical test was the deflection of light by a gravitational field, first performed by Sir Arthur Eddington in 1919.

Born to Quaker parents in December 1882, Arthur was just two years old when he lost his father to a typhoid epidemic that ravaged England. As a child, Eddington was enamored of the night sky and often tried to count the number of stars he could see. Initially Eddington was schooled at home, but when he did start attending school, he excelled so much in mathematics that he won a scholarship to Owens College in Manchester at age 16. He graduated with first class honors in physics, and promptly won another scholarship to attend Trinity College at Cambridge University.

Eddington completed his M.A. in 1905. First he worked on thermionic emission at the Cavendish Laboratory, and then tried his hand at mathematics research, but neither project went well. He briefly taught mathematics before re-discovering his first love: astronomy. Eventually he found a position at the Royal Observatory in Greenwich, specializing in the study of stellar structure. By 1914 he had moved up to become director of the Cambridge Observatory; a Royal Society fellowship and Royal Medal soon followed.

During Eddington’s tenure as secretary of the Royal Astronomical Society, Willem de Sitter sent him letters and papers about Einstein’s new general theory of relativity. Eddington became Einstein’s biggest evangelist at a time when there was still considerable wartime hostility and mistrust toward any work by German physicists. He soon became involved in attempts to confirm one of the theory’s key predictions.

Since the masses of celestial bodies would cause spacetime to curve, Einstein predicted that light should follow those curves and bend ever so slightly. Isaac Newton had also predicted that light would bend in a gravitational field, although only half as much. Which prediction was more accurate? Scientists feared that measuring such a tiny curvature was simply beyond their experimental capabilities at the time.

It was Britain’s Astronomer Royal, Sir Frank W. Dyson, who proposed an expedition to view the total solar eclipse on May 29, 1919, in order to resolve the issue. Eddington was happy to lead the expedition, but initially the venture was delayed. World War I was raging, and the factories were too busy meeting the country’s military needs to make the required astronomical instruments. When the war ended in November 1918, scientists had just five months to pull together everything for the expedition.

Then Eddington set sail for Principe, a remote island off the west coast of Africa, sending a second ship to Sobral, Brazil — just in case the weather didn’t cooperate and clouds obscured the view. It proved to be a smart decision. Eddington’s team was dismayed when heavy rains and clouds appeared on the day of the eclipse, although the skies cleared sufficiently by the time of the event to allow them to make their measurements. The Brazilian team had their own challenges: The tropical heat warped the metal in their large telescopes, forcing them to also use a smaller 10-centimeter instrument as backup.

Once the two teams had analyzed their results, they found their measurements were within two standard deviations of Einstein’s predictions, compared to twice that for Newton’s, thus supporting Einstein’s new theory. News of Eddington’s observations spread quickly and caused a media sensation, elevating Einstein to overnight global celebrity. (When his assistant asked how he would have felt had the expedition failed, Einstein is said to have quipped, “Then I would feel sorry for the dear Lord. The theory is correct anyway.”)

Not everyone immediately accepted the results. Some astronomers accused Eddington of manipulating his data because he threw out values obtained from the Brazilian team’s warped telescopes, which gave results closer to the Newtonian value. Others questioned whether his images were of sufficient quality to make a definitive conclusion. Astronomers at Lick Observatory in California repeated the measurement during the 1922 eclipse, and got similar results, as did the teams who made measurements during the solar eclipses of 1953 and 1973. Each new result was better than the last. By the 1960s, most physicists accepted that Einstein’s prediction of how much light would be deflected was the correct one.

Eddington succumbed to cancer in November 1944 after a long illustrious career. In addition to his many scientific contributions, he once penned a lyrical parody of The Rubaiyat of Omar Khayyam about his famed 1919 expedition:

Oh leave the Wise our measures to collate
One thing at least is certain, LIGHT has WEIGHT,
One thing is certain, and the rest debate –
Light-rays, when near the Sun, DO NOT GO STRAIGHT.

Douglas, A. Vibert. The Life of Arthur Eddington. Thomas Nelson and Sons, 1956.