China’s Proposed Heir to the LHC 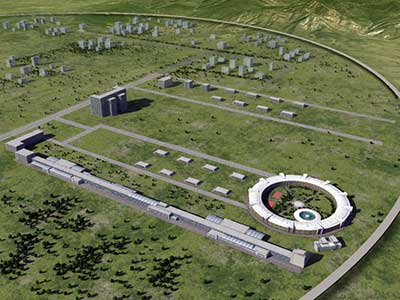 Rendering of the proposed CEPC

APS April Meeting 2016 — His talk drew a modest crowd, but Xinchou Lou’s excitement permeated the room. A senior fellow at China’s Institute of High Energy Physics (IHEP), Lou presented China’s plan for joining the ranks of international experimental particle physics: a circular collider 55 kilometers in circumference. It is designed to eventually achieve 100 TeV collisions and tentatively would be located 300 kilometers east of Beijing.

China seeks to make the proposed collider central to high-energy physics experiments from 2028 until 2055. With the Higgs boson observed and the Large Hadron Collider (LHC) approaching its maximum 14 TeV collision energy, the goal of the project is to keep high energy physicists thinking ahead, said Lou, who was recruited from the University of Texas at Dallas to be a project director for the collider. “I think this [project] will really energize our field,” he said during the presentation.

Lou believes the time is ripe for a Chinese collider. He cited China’s experience in building and operating the Beijing Electron-Proton Collider (BEPC) in the 1980s and its successor, BEPC II, which is still in use, while also pointing out that infrastructure and labor costs in China are low.

At the end of the presentation, one audience member echoed Lou’s enthusiasm. “As a Chinese student working on high energy experiments in the U.S., if this is really happening and there are opportunities, I think people like me would like to go back to help,” he said. “Plus, it [would be] close to my hometown.”

The project has the home-grown support necessary for its success, said Nima Arkani-Hamed, Lou’s collaborator and the first director of IHEP’s Center for Future High Energy Physics. “It’s already tremendously boosted the morale of the under-35 crowd who are not sure what the future of [the] field might look like in the next 30 years,” said Arkani-Hamed, who collaborates on the collider proposal and also gives topical lectures at Chinese universities. “It has also captured a place in the imagination of teenagers and twenty-year-olds in China.”

Even so, China remains an underdog in the particle physics community. “They’re the most recent country to enter into this game, so in that sense, they don’t have the level of experience building large colliders of this scale that the U.S. or Europe has,” said Ashutosh Kotwal, a Duke University physicist who coordinates U.S. physicists in the global effort to build a new collider and has collaborated with the Chinese group in the past. “But I’m happy that they have the ambition to do it.”

First proposed in 2012 by Yifang Wang at IHEP, the collider project, known as CEPC-SppC for Circular Electron-Positron Collider and Super Proton-Proton Collider, is still in its initial design phase. The acronyms in its name reflect two distinct project stages. The first stage, CEPC, tentatively will begin construction in 2021 and will collide electron and positrons at energies up to 250 GeV beginning in 2028. [By comparison, the current record-holder for most energetic electron-positron collider, the Large Electron-Positron Collider (LEP) at CERN reached 209 GeV in 2000.] Lou said they intend this electron-positron collider to be a Higgs, W, and Z boson factory. A high production rate will allow them to both confirm theory and look for new physics. In addition, they will study bottom, charm, and top quarks produced in the collisions. This collider will be in operation until 2035, when construction on the second stage begins.

The second stage, a proton collider planned to start at 70 TeV collisions and upgrade to 100 TeV, would begin construction within the same tunnel starting in 2035. After expected completion in 2042, this collider will be used to look for physics beyond the Standard Model. From the first electron-positron collisions to the final proton-proton measurements, the collider’s experiment lifetime will span from 2028 until 2055.

By first constructing an electron-positron collider and later replacing it with a proton-proton collider, the Chinese are following a design strategy that CERN has used in the past. Before the LHC began construction, its tunnel housed the LEP. This cuts costs, while also allowing time for the complicated research and development needed to build the proton collider. The biggest technical challenge, Lou said, will be to develop the high-field superconducting magnets that accelerate the protons close to the speed of light. This proton collider’s magnets will need to produce fields of 20 T. (By comparison, each of the LHC’s most powerful magnets can produce 8 T. CERN has developed prototype magnets that can achieve over 13 T.)

Another technical challenge, said Kotwal, will be dealing with synchrotron radiation in the electron-positron collider. This radiation, which all charged particles emit when accelerated in a curved path, could heat up the collider tunnel and break its vacuum. In addition, the experiment would need to make up for the energy lost through radiation. Kotwal said the extra energy used to cool down the tunnel and to compensate for the electron’s radiated energy would be on the order of the power use of a small town.

Two other future colliders share the table with the Chinese plan: the International Linear Collider (ILC) in Japan and CERN’s Future Circular Collider (FCC) in Europe. Lou said that because the Chinese collider would probe lower energies than the ILC, whose initial collisions are planned for 500 GeV, their group considers the two projects complementary. In addition, Kotwal pointed out that because the ILC design is complete and ready to build, experiments at ILC will likely precede China’s.

However, the Chinese collider’s goals do overlap with European FCC plans. The projects have similar time frames and are designed to answer the same big particle physics questions. These colliders have billion-dollar price tags — should the world have two?

According to Kotwal, the question isn’t relevant yet because this competition is beneficial during the design stage. The particle physics community benefits from more scientists being involved, he said. “Let’s just collaborate and do our homework together.”

In addition, Arkani-Hamed pointed out that too much focus on the competition between the colliders can slow down the actual physics research. “One aspect of this discussion that I find a little odd, especially among people in the West, is this idea we have to be perfectly kumbayah, in lock-step with each other, internationally deciding everything all at the same time,” he said. “This has not worked out in the last 10, 15, 20 years. It hasn’t given us projects that have gone ahead with great momentum.”

However, the Chinese collaboration recognizes that with other collider proposals on the table, their collider may not pan out as planned, Lou said. “We fully support a global effort for the circular collider program, even if eventually the big machine is not built in China,” he said during the talk.

In addition to 12 million yuan (1.9 million USD) in seed money from IHEP over the next three years, the group recently submitted a proposal to the Ministry of Science and Technology within the Chinese government for 50 million yuan (7.7 million USD).

Yuanning Gao, a Chinese physicist at Tsinghua University who leads the collider’s fundraising efforts, is optimistic about the proposal. “The central government really thinks that China should initiate an international project,” he said. According to Gao, next year they plan to ask the government for 1 billion yuan (154.6 million USD), which will go to research and development of the collider.

The timing is perfect for China, Arkani-Hamed said. Its government wants to prove itself in the international community, and high energy physics needs an ambitious new collider. When geopolitical and science goals line up perfectly, he said, “you should just go for it.”

Lou echoed this sentiment after his talk. “China is still a developing country,” he said. “It hasn’t done any big science projects. People look at us and want to know, ‘Are you serious?’” Fifty-one PowerPoint slides later, at the very least — he clearly was.