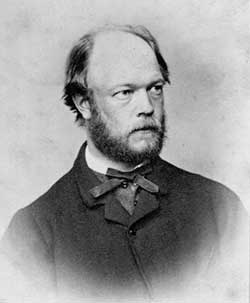 When Tait tapped on the back of a box filled with thick smoke, vortex rings shot out from a hole in the front.

Mathematicians have been fascinated by topological knots for centuries, ever since 1833 when Carl Friedrich Gauss figured out how to compute the number of times two interlinked knots wrap around each other. But the field didn’t gain true prominence until the turn of the century, after a Scottish mathematician named Peter Guthrie Tait conducted experiments with smoke rings.

Born in 1831 in Dalkeith, Scotland, Tait lost his father at the age of six, and the family relocated to Edinburgh to live with his uncle, a banker named John Ronaldson. Ronaldson’s side interests — including astronomy, geology, and photography — inspired young Peter to pursue similar scientific interests. He proved an apt pupil, ranking at the top of his class for all six years he studied at the Edinburgh Academy, with a strong proficiency in mathematics. Among his classmates was James Clerk Maxwell; their paths would continue to cross for the rest of their lives.

Along with Maxwell, Tait went on to study at the University of Edinburgh, although he transferred to Peterhouse College, Cambridge, the following year. He graduated with top honors in mathematics and became a Peterhouse Fellow, coaching undergraduates and writing a textbook, Dynamics of a Particle, with his colleague William Steele. In 1854, he became a professor at Queen’s College in Belfast, conducting his first experiments (with Thomas Andrews) on measuring the effects of electrical discharges in various gases. Five years later, he beat out Maxwell for the chair of natural philosophy at the University of Edinburgh, in part because of his superior teaching skills.

Back in 1858, Tait had read a paper by Helmholtz on the motion of a perfect fluid, which he translated in 1867. Among the phenomena described was the unusual behavior of vortex rings. Helmholtz suggested that two such interacting rings would retain their shape even though their size and velocity might change. Tait set out to verify this theoretical prediction experimentally with smoke rings.

He took a pair of cardboard boxes with a circle cut out in front, and covered the back with a rubber diaphragm. Inside the boxes he placed a mixture of ammonia, salt, and sulfuric acid, producing a thick smoke. Punching the diaphragm at the back of the box forced the smoke inside through the circular opening in the front, creating perfectly formed smoke rings. Tait noted that they looked like “rings of solid India rubber.” He even managed to make smoke rings bounce off each other, just like rubber. And he noticed the smoke rings were remarkably stable, traveling across the room without dissipating. So Helmholtz’s theoretical prediction seemed correct. Rings made of an ideal fluid, with no friction, should, in theory, last forever.

Tait showed his smoke ring experiment to William Thomson (Lord Kelvin), who was pondering the problem of the atom: namely, there were many competing theories about what atoms might look like, and how one might account for different elements. Tait’s smoke rings inspired Kelvin to devise a radical new theory: Perhaps atoms were actually knots of swirling vortices in the luminiferous ether, which scientists at the time thought existed as an invisible medium through which light moved. Different kinds of linked vortex knots would be stable, and would correspond to different chemical elements — specifically, to their particular emission spectra. The heavier the element, the more complicated the knot.

Tait was initially skeptical of the idea, but he soon warmed to the challenge of creating a knot-based periodic table of elements, by drawing many different kinds of knots and trying to match them to specific emission spectra. Even Maxwell became fascinated with the vortex theory, enthusiastically writing to his two friends, “May you both prosper and disentangle your formulae in proportion as you entangle your [vortices].”

Alas, the famed Michelson-Morley experiment in 1887 proved there is no such thing as the luminiferous ether, and without that medium, Kelvin’s vortex theory of atoms simply couldn’t work. But his work with Tait and Maxwell helped establish knot theory in mathematics, helping to rediscover the work of Gauss and Johann Benedict Listing 20 years before.

Tait went on to become a leading topologist, formulating a series of conjectures on alternating knots that mathematicians finally proved in the 1990s. Knot theory continues to be an active and exciting area of research, both fundamental and applied. In the 1980s, for example, mathematicians found several solutions to Maxwell’s equations describing objects in free space that were decidedly knot-like.

Over the last few years, physicists have suggested the possibility of tying real knots in light fields, and successfully tied the first “quantum knots” in a Bose-Einstein condensate. And with the advent of string theory, physics has in some sense come full circle: fundamental particles and forces arise from the vibrations of one-dimensional bits of string, sometimes taking the form of closed loops (“un-knots”).

Tait’s scientific interests spanned a broad range, from thermodynamics and the motion of iron filings on a vibrating plate, to a classic paper on the trajectory of golf balls, inspired by his son Frederick’s love for the sport. Frederick was a leading amateur golfer, but gave up the sport to fight in the Boer War. He was killed in 1900. Tait himself died the very next year.

Kelvin spoke fondly of his friend’s passionate nature, recalling that Tait once declared that nothing but science was worth living for. And yet Tait had been a voracious reader with a prodigious memory. “What he once read sympathetically, he ever after remembered,” Kelvin recalled. “Thus he was always ready with delightful quotations, and these brightened our hours of work.”