Battling the Emperor of Maladies 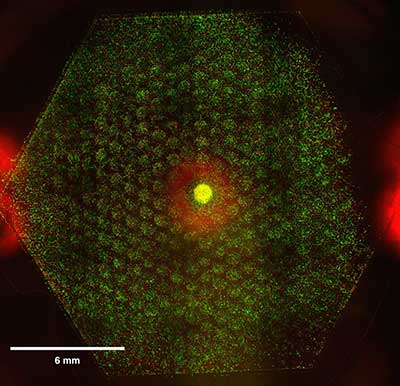 To those classic phase transitions, add this one: What causes cells to convert from well-behaved constituents of bodily tissues to out-of-control and potentially deadly cancers?

The question is central to understanding and fighting one of the world’s biggest killers, and the need for new approaches is clear, Kenneth Pienta, an oncologist at Johns Hopkins University, told attendees at an invited session: Globally, more than 14 million people get cancer and more than 8 million people die of it each year. And despite decades of research and limited successes against some types of cancer, overall numbers are growing, not shrinking, as populations get older.

Pienta studies metastasis, the process by which cells leave a tumor, enter the bloodstream and spread throughout the body. Once a tumor metastasizes it becomes far more difficult to treat — and far more deadly. “Metastasis is the lethal event,” Pienta said. To better understand the process, he teamed with two theoretical physicists Herbert Levine of Rice University in Houston and the late Eshel Ben-Jacob of Tel Aviv University in Israel. The physicists analyzed studies of proteins in cells transitioning from being stationary epithelial cells, which line blood vessels and organs throughout the body, to more mobile mesenchymal cells, which are often associated with metastasis. Levine and Ben-Jacob then predicted that intermediate cell types between epithelial and mesenchymal may exist, and could provide a warning sign that a tumor is becoming metastatic.

Inspired by the theorists’ prediction, Pienta is now looking for such hybrid cells circulating in the bloodstream of prostate cancer patients. “It has changed the way we as cancer biologists and physicians think completely,” he said. “It’s changing the field.”

Pienta is also convinced that, in addition to genetic changes in tumors, researchers should pay more attention to factors in the body that could cause cells to leave a tumor and enter the bloodstream. Inspired by concepts from ecology and the biology of invasive species, Pienta hypothesized that an unfriendly environment — which he called a “cancer swamp” — drives cells to leave a tumor and enter the bloodstream. To make the cancer swamp idea more quantitative, Pienta has joined with physicist Robert Austin at Princeton University, a pioneer in developing microfluidic devices that expose cells to gradients of environmental factors like drugs or nutrients, as they would experience in the body.

Princeton graduate student Ke-Chih Lin, who works closely with Austin, presented a device they call the “death galaxy” — a 2.7-centimeter-diameter, two-dimensional network of 484 connected hexagonal chambers, resembling a miniature silicone beehive. The researchers plan to place cancer cells in the chambers, add chemicals at varying concentrations, and measure how cells respond through microscopy or by sampling the fluid the cells grow in. “We need physicists to help us build artificial environments” like the death galaxy, Pienta said. “That’s not something cancer biologists can do.”

Others presented research on how the matrix of molecules that occupy space between cells in the body could help or hinder cancer cells from invading other tissues. Liyu Liu, a former postdoc in Austin’s lab who is now at China’s Chongqing University and the Chinese Academy of Sciences in Beijing, described a microfluidic chip he developed to study how cancer cells interact with collagen fibers, a major component of the extracellular matrix. By placing cancer cells and collagen together on the chip, Liu observed fibers lining up in parallel rows, a process that he thinks may help the cells pierce blood vessel membranes. “The cancer cell can construct a highway for invasion,” he said.

Meanwhile, for Josef Käs, a physicist at the University of Leipzig in Germany, metastasis is less an errant genetic algorithm than a phase transition. Even the ancient Romans recognized that tumors are stiffer than ordinary tissue. Yet cells that metastasize tend to be soft and pliable. Käs envisions a tumor as a “jammed” material like glass, held together by dense packing of its cells. For metastasis to occur, cells must soften until they’re mobile enough to escape the jammed state. “In a nutshell, I’m saying the [epithelial-to-mesenchymal transition] is an unjamming transition,” Käs said.

To quantify this idea, he and his colleagues have measured the stiffness of breast and cervical cancer cells using laser-based optical traps, and found that even hard tumors contain some soft cells. When enough of these soft cells are present, they can start to flow — “like ducks in a row,” Käs put it, potentially leading to metastasis. He hopes his methods could help oncologists more precisely predict when a biopsied tumor is likely to metastasize, and better plan treatments.

Many presenters pointed out the challenge of tackling the extreme diversity of cancer, which the National Cancer Institute (NCI) describes as not just one disease but “a collection of related diseases.” The genes activated in tumor cells vary widely between people, between types of cancer, and even within a single tumor. As a result, a population of drug-resistant cancer cells usually remains even after treatment, and often gives rise to new, more malignant tumors.

Sui Huang of the Institute for Systems Biology in Seattle is hoping to combine recent big data approaches in biology with research on statistical warning signs preceding tipping points in ecology and other fields to turn cancer’s genetic diversity into an asset. Huang measures expression levels of genes in cells of tumors that have been treated, and places them in a high-dimensional state space. His goal is to extract from the population-level data early warning signals that such cells could exit dormancy and start to grow, which could help researchers design drug regimens to prevent recurrence of tumors after therapy.

The idea of identifying a statistical warning sign that a transition is about to occur, rather than focusing on the mechanisms behind that transition, is a radically new approach, Huang said. “It’s really a hard sell among biologists,” he lamented. “We need a culture change. [Physicists] try to understand general principles, not every step in a mechanism.”

The culture clash between physics and oncology was a topic of sometimes heated discussion at a session entitled “The War on Cancer: Physics Enters the Fray.” In fact, physics had already entered the fray in a big way in 2009, when the NCI launched its Physical Science-Oncology Center program with 12 five-year awards of around $2.5 million per year. Program directors at the time announced ambitious goals of marshalling physicists to create a fundamental theory of cancer, in contrast to their more traditional roles as developers of cancer-fighting technology like radiation therapy and proton beams.

The PS-OC program has catalyzed research into areas such as tumor cell evolution, circulating tumor cells in the bloodstream, and information transfer in cancer, said Anna Barker, a biologist at Arizona State University, who spearheaded the program when she was deputy director for strategic initiatives at NCI, which she left in 2010. “We were funding very few of these fields at the NCI when we started,” she said. The agency has “multiple grants in each of them now.”

The PS-OC program is now handing out new awards, and many of those funded in the first round have not received additional support, forcing them to look elsewhere to sustain their projects. Some say the NCI’s recent awards reflect a turn toward more conventional approaches that have failed to produce major gains. The NCI’s review system functions “like the law of mass action,” complained Austin, who provided input during the program’s conception, and received one of the original grants. “You only end up with the mean.” Discouraged that NCI has not funded his more recent proposals, he is now courting private foundations.

NCI officials, however, say they are as committed as ever to bringing methods and insights from the physical sciences, which includes applied mathematics and engineering as well as physics, to bear on cancer. “I think overall, the richness of the network is going to increase well beyond what we had in the first phase,” said Michael Espey, a program director in the NCI’s division of cancer biology. And there are other avenues of support for physicists looking to study cancer, presenters noted. The National Science Foundation’s Krastan Blagoev described the agency’s Physics of Living Systems program, which specifically funds theoreticians such as Levine. Presenters also pointed to two relatively new journals — Convergent Science Physical Oncology, launched last year by IOP Publishing of Bristol, UK, and Cancer Convergence, a Springer-published journal that will begin accepting papers later this year — as evidence that the field is gaining steam.

The APS March Meeting itself also reflects the field’s growth, with dozens of talks addressing aspects of cancer — both in standing sessions dedicated to the disease, and in ones on cell motility, active matter, and other topics in biophysics and soft matter. “I can assure you it’s going to continue,” said Emory University biophysicist Ilya Nemenman, incoming chair of the APS Division of Biological Physics, adding that the meeting venue’s proximity to the NCI in Bethesda, Maryland, and Johns Hopkins University in Baltimore helped organizers attract cancer experts.

In the end, progress will come from physicists and oncologists working together, rather than going their own ways, presenters agreed. “This is a complicated subject,” Levine cautioned his peers. “Physicists need to make simplifications so they can understand things, but they also then need to be aware of the complications.”

Oncologists, meanwhile, desperately need the big-picture insights that only physicists can provide, Pienta added. “There are lots of people who are waiting to partner with you,” he said. “This is not a problem that’s going away very quickly unless you guys solve it.”