APS March Meeting 2016 — Each year during its Kavli Symposium, the APS March Meeting features speakers from the forefronts of their fields. The 2016 symposium showcased a broad range of topics, from super-resolution microscopy and its biological applications, to the precise formation of liquid droplets, to the detection of gravitational waves. 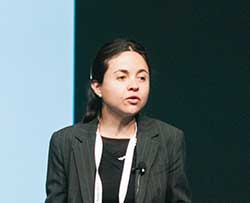 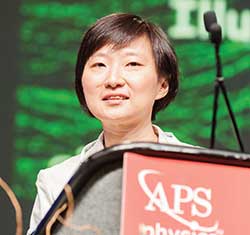 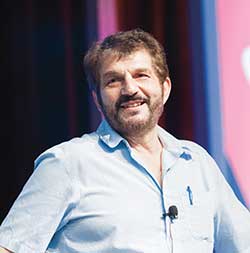 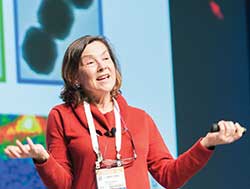 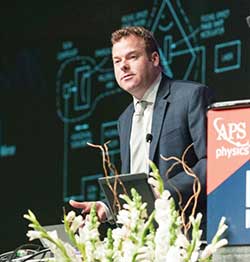 Ana Maria Rey of JILA and the University of Colorado Boulder discussed her work with ultra-cold atoms, including atomic clocks that use alkaline earth atoms such as strontium. Rey's work helped to improve the timing of atomic clocks formed from atoms trapped in an optical lattice, by enabling scientists to understand and control the interactions that occur between atoms in such clocks, which can degrade their precision.

Rey's research also spans related subjects, from quantum simulation, to forming new materials that are not accessible in nature, to constructing quantum computers. "I think there is a great vista ahead," Rey said. "These atomic systems are such that they are opening the possibility to see very exotic behavior."

Xiaowei Zhuang of Harvard University discussed methods for seeing the very small. Her group developed the method of stochastic optical reconstruction microscopy (STORM), which can image structures smaller than the diffraction limit that is set by the wavelength of light.

In traditional optical microscopy, objects smaller than a few hundred nanometers will show up as a blur in standard microscope images, thanks to diffraction. Zhuang and others seized on the possibility of beating the diffraction limit by tagging individual molecules and pinpointing the center of a single molecule's blur. Zhuang tagged molecules with fluorescent dyes that can be switched on with light. By turning on a small subset of the dye molecules at a time, she can determine the positions of individual molecules.

"We can not only use the super-resolution approaches to get prettier and sharper pictures, we can actually use that to discover novel cellular structures people didn't even know existed before," Zhuang said. Using this method, her group discovered a skeleton-like structure in neurons, made of actin.

David Weitz of Harvard University spoke about his methods for making extremely regular liquid droplets. Using new microfluidics techniques, Weitz and his group created precisely sized drops with a variety of unique properties. "You can make little Russian dolls of drops — drops inside drops inside drops — in a very, very simple fashion." And by making such liquid drops in air, the researchers formed nanoparticles.

Their materials could be useful for making drugs with enhanced bioavailability, and they've already scaled up their microfluidics processes to make products such as makeup. "This to me is proof positive that not only can you do interesting physics and do interesting science, but you can actually make things in a very practical way," Weitz said.

Naomi Halas of Rice University spoke about her work on plasmonic nanoparticles. Plasmons, the collective oscillation of electrons in a metal, can be excited in plasmonic nanoparticles by hitting them with light, and the particles' responses can be tuned by varying their size and shape. The particles have already turned up in home pregnancy tests and could be useful in applications from color displays to solar cells.

Although such particles have traditionally been made using gold and silver, Halas now favors aluminum nanoparticles, in the interest of sustainability and cost. "I decided to take a lesson from history," Halas said, noting that the first transistor was made of germanium, but the electronics industry soon switched to silicon due to the price and scarcity of germanium.

Halas also uses light-absorbing nanoparticles in water to quickly create steam with the aid of sunlight. The process could be useful for improving the efficiency of processes involving distillation, she says. "Distillation is one of the most energy-consuming processes done by the civilized world," Halas said. "If we can make distillation more efficient, then that's a pretty tremendous goal."

Duncan Brown of Syracuse University discussed the recent observation of gravitational waves by the LIGO experiment. 1.3 billion years ago, two black holes spiraled around one other, orbiting closer and closer until they violently merged, emitting three solar masses-worth of energy in gravitational waves. LIGO detected these gravitational waves last September, Brown recalled, just after the upgraded version of the experiment, Advanced LIGO, turned on for the first time. The signal was "absolutely beautiful," Brown said, and it was easily visible above LIGO's ever-present background noise. "I did not expect this," he said.

When one eager physicist asked when to expect a second detection, Brown pointed to the second strongest event reported in the detection paper — a 2-sigma result, which was not significant enough to report as a detection — saying that it "quacks like a duck," and added, "If you ask me, this little guy here looks like a weak binary black hole merger." Either way, Brown said, LIGO is currently analyzing two more months of data, and should have results soon. And LIGO will begin taking more data in late summer or fall. "We won’t have to wait too long," he predicted.