Physicists, the Brain is Calling You 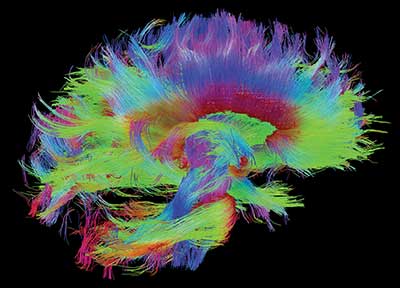 Wiring diagram of a human brain created by tracking the movement of water molecules with magnetic resonance imaging.

APS March Meeting 2016 — From modeling the biomechanics of brain development to improving neuroimaging techniques to processing and analyzing the data from studies using those techniques, physics expertise is urgently needed in all areas of neuroscience, presenters at the 2016 APS March Meeting said. They urged physicists to get involved.

The potential reward is a deeper understanding at one of science’s biggest frontiers — the few-pound lump of grey matter that makes us who we are, yet whose functioning has remained largely a mystery despite more than a century of study.

The brain is, of course, not new ground for physicists. Two biophysicists, Aaron Lloyd Hodgkin and Andrew Huxley (with John Eccles), shared the 1963 Nobel Prize in Physiology or Medicine for discovering how the neuron, the brain’s basic cell, transmits signals. And the groundbreaking theoretical model of neural networks emerged from work by physicist (and APS past president) John Hopfield and others, some of which was presented for the first time at March meetings in the early 1980s.

Those early advances have now re-emerged as important driving forces for major new initiatives aimed at pushing brain science forward. In an invited session on large-scale neuroscience projects, Miyoung Chun, a geneticist and executive vice president of science programs at the Kavli Foundation, described discussions the Foundation held beginning in 2011 on a “Brain Activity Map,” which eventually morphed into the Obama administration’s Brain Research through Advancing Innovative Neurotechnologies (BRAIN) Initiative. Physical scientists were so heavily involved in the planning, Chun said, that “it was a bit of a problem when the BRAIN Initiative was announced, because many of the neuroscientists [said], ‘who are these people, and how are they representing our field?’”

The initiative represents a major injection of funding into exactly the kind of science that physicists have long excelled in: tool development. One of the major challenges for neuroscience has been figuring out how to “see” what is happening inside the living brain, which is opaque and, in the case of most vertebrates, encased inside the skull. Since 1990, functional magnetic resonance imaging has enabled researchers to detect activity in specific regions of the brain, and scientists continue to push the technique toward higher power and resolution.

But much of the action today involves technologies that record the activity of single neurons, potentially allowing researchers to map out entire brain circuits and explore the brain’s computational code. As an example, Chun described BRAIN Initiative-funded research by Chris Xu at Cornell University, who used ideas from adaptive optics originally developed for astronomy research to gather images from more than a millimeter deep in a mouse brain.

Since Barack Obama’s 2013 announcement of the initiative, federal investment has increased severalfold, with the National Science Foundation and the National Institutes of Health each contributing around $150 million in 2016, and other agencies putting in smaller amounts. Meanwhile, private foundations are partnering with the federal agencies, collectively contributing more than $300 million in 2015, according to data Chun showed. With the influx of funding, Chun said, “I think the physics community has a great opportunity for really solving these complex questions.”

Molecular biologist David Tank of Princeton University, who early in his career helped Hopfield develop neural network theories, described recent research funded by the Simons Collaboration on the Global Brain, which aims to quantify neural states in a brain actively doing tasks. “These ideas have been explored theoretically and in psychology for centuries,” he said, “but now we really are beginning to have tools that allow us to probe them in the awake brain.”

To study those neural states, Tank and his colleagues developed a two-dimensional virtual reality headset for a mouse. The device allows the researchers to measure neuron firing while the mouse explores a complex environment, without technical challenges that would accompany such measurements if the mouse were moving around in real space. The rich datasets that are emerging present tantalizing evidence that spatial neurons are encoded according to a theoretical model called an attractor manifold, a concept that emerged in the 1960s and 1970s from chaos theory, and is now resurging, Tank said.

Techniques to record the activity of large numbers of neurons are enabling powerful insights, but they are also generating much larger volumes of data than neuroscientists are used to, Tank cautioned. “Large-scale recording technologies really are transforming neuroscience. We will soon be swamped with neural activity data,” he said. “We need the brightest minds and the best mathematical tools to make sense of these data.”

And physicists are the experts at crunching huge datasets, having cut their teeth on the original big data from telescopes like the Hubble Space Telescope and particle colliders like the Large Hadron Collider, Chun added. “We hope that neuroscience can take advantage of what’s already happened in other fields like astrophysics,” she said. “The BRAIN initiative will be successful only if physicists join in.”

Theoreticians are also needed to place the insights from modern experiments into a coherent theoretical framework, added Terry Sejnowski, a neuroscientist at the Salk Institute for Biological Studies in La Jolla, California, and another early pioneer of neural networks. “I don’t think we have a theory of the brain that’s anywhere near the level [of the theories of evolution or DNA]. But we need it.”

At another invited session, physicists discussed such theoretical issues, including how to use statistical mechanics to analyze data from retinal neurons, what the dimensionality of neural data is, and how networks of neurons predict the future based on present stimuli. “These are the kinds of things that physicists would be worried about,” and that might seem out of place at a traditional neuroscience meeting, said session chair William Bialek, a physicist at Princeton University. He added that the APS March Meeting is providing an important space for community-building among people wanting to approach biological topics through physics, without regard to traditional disciplinary boundaries. “Where do you go as a physicist to talk to other physicists who are interested in other parts of biology? It looks like APS is going to be the answer.”

How the Brain Folds

An example of such a cross-disciplinary approach was provided by an invited session on quantifying the forces that give the part of the brain known as the cortex its complex folded shape. Researchers studying the brain’s material properties have developed two main hypotheses for cortical folding: that tension in neurons’ long, threadlike axons pulls the developing brain into its folded configuration, and that the brain buckles as different parts grow at different rates inside the skull.

David Van Essen, a neuroscientist at Washington University in Saint Louis, led off the session by describing evidence for his hypothesis, originally published in 1997, that axonal tension plays a dominant role. The hypothesis could help explain how the brain is wired, Van Essen said, but added that neuroscientists like him need physicists to add quantitative rigor to their anatomical models. “There’s room for dramatic progress, and it will accelerate if we bring in more well trained and well integrated talent from physics,” he said.

One physicist who is contributing is Jennifer Schwarz of Syracuse University in New York. She presented a model that builds on Van Essen’s hypothesis to make testable quantitative predictions about parameters such as the axons’ spring constants and elastic moduli. Brain biomechanics is well outside what most mainstream neuroscientists are interested in, and probably won’t be funded by large-scale efforts like the Brain Initiative, Schwarz said. But understanding how the brain gets its shape is crucial to understanding how it’s wired, and ultimately how it works. “I’m hoping to help neuroscientists ultimately … understand structure and function” she said. “I’m hoping [brain biomechanics and functionality] will eventually converge — that’s my goal.”

The emphasis on neuroscience at this year’s March Meeting resulted partly from organic growth in the field, but was also partly intentional, said Ilya Nemenman, a biophysicist at Emory University, who as incoming Division of Biological Physics chair oversaw the division’s meeting programming. “Computational neuroscience in some sense started here at the APS meeting … and then people migrated out to neuroscience meetings,” he says. “We made the decision a couple years ago that we wanted to bring physical scientists back.”

“I think one of the impacts this will have is to get what are still some of smartest kids who go to physics,” he added, “and actually tell them that now you can use that sort of training to solve the brain.”