The Call of the Caves 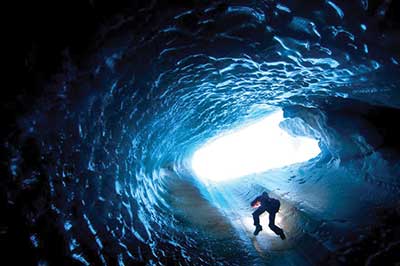 Matt Covington, pictured above in a glacier cave in Svalbard, Norway, uses his physics training in exploring and understanding caves.

For Matt Covington, the call of the caves was stronger than the pull of the cosmos. Educated as an astrophysicist with a Ph.D. from the University of California, Santa Cruz, he originally chose the subject for its job security. “I didn’t want to be flipping burgers the rest of my life so maybe I should go into grad school for physics,” he recalls thinking.

And yet, his love of nature was originally nurtured by access to inner space. He grew up in Arkansas, where the limestone bedrock breeds an abundance of caves, and in fact the state is internationally known by cavers and cave scientists alike for its underground laboratories. Covington had been exploring caves there since he was a child, and he kept his eyes peeled for opportunities where his craving for caves could turn into a career.

While his sights were set on the stars, he noticed something about his attitude. “I enjoyed astrophysics but wasn’t passionate about it,” he says. “I would do my work and then go caving.” One day, as is known to happen, “it hit me,” he says. “I was sitting in a seminar on galaxy formation … and I wondered if this could be used to study caves.”

He stuck with his doctoral studies, wrote two NSF proposals for postdoc fellowships in cave geophysics, and both were funded. Covington used one fellowship to spend a year at the University of Minnesota Twin Cities, where he worked on issues pertaining to hydrogeology, and another to spend two years at the Karst Research Institute in Postojna, Slovenia, where he examined geomorphology. Both institutes are in regions which have fantastic cave systems. “Now I have to be careful that I don’t work too hard,” he jests, “because I just want to work all the time.”

Covington stresses that his transition from astrophysics to speleophysics wasn’t smooth. “When I started I had little knowledge of the scientific literature, but knew a lot about caves,” he says. Despite this lack of formal education, his intimate familiarity with cave environments gave him something no degree could ever provide — street cred in the geology community. “It wasn’t like I was some physicist totally detached from reality,” who just randomly decided to ditch galaxies for stalactites and stalagmites, he notes. His cave expertise, coupled with his postdoc appointments, enabled him to compete at the same level as Ph.D. geologists for jobs. Today he is assistant professor of geosciences at the University of Arkansas, where he had received his undergraduate degree.

Ok — so what the heck does a cave physicist do? Geomorphology, hydrogeology, and mathematical models of physical processes all take a starring role in the field. “The study of landscape evolution is vital,” says Covington. “There’s a push to develop mechanistic models for studying landscape development, so there’s good interplay between geology and physics.”

His research group focuses on karst terrains, which are places where dissolution of soluble rock plays a major role in the evolution of landscapes, the formation of caves, and, ultimately the routing of groundwater, he notes. When a cave system interconnects with an aquifer, it presents problems, especially if contaminants are involved. “Contaminants move rapidly without filtration,” he explains, “and how and where they go is dependent upon the structure of the caves. So the essential problem is trying to figure out the structure.”

The cave is made up of pores in-between and inside rocks, and the way water flows through these systems is dependent upon numerous factors, including the position of the individual cavities, the position of the cave itself in the rock, and how big the holes are, among many other elements. As a cave physicist, Covington has to take a holistic view of the entire cave system in order to map its components, and has to understand how water shapes and reshapes the cave and interacts with the cave’s minerals, sediment, and microorganisms. He does this by building numerical models of fluid flow and transport, heat exchange, and chemical variations in the underground lairs. “We look at how the attributes of the cave influence the signals coming out of it,” he adds.

The challenge is the complexity of the cave system. “You’re never going to understand the whole thing,” he admits. “Most of the work we’ve done is to simplify.” So Covington’s other focus area is related to better comprehending the processes that form caves. He explores different aspects of mature caves. “We look at the width of a stream in a cave, and seek to answer what controls that width. Can we piece together the story of a cave’s development by reading the shapes of the cave passages left over time?” He examines erosion processes, and notes that dissolution of rock versus mechanical erosion of rock combined with movement of sediment can provide clues to the nature of how a cave was formed.

Mathematical models of caves are one thing, but being able to cave is quite another, and it is one of Covington’s favorite elements of his career choice. Some of his most memorable experiences include exploring J2, a deep cave at the bottom of a sinkhole in southern Mexico that he helped investigate in 2004. As he describes it, the area was ripe for caves. “We were walking around in the jungle looking for holes.” Another team had already identified some possibilities. “It is a slow and painstaking process” to find a cave. After identifying a possible opening, the mapping and exploring begin.

Over three years, the team carefully, and as safely as possible, traversed J2. At one point, they hit an area of the cave that was filled with water. They couldn’t continue because they weren’t prepared for diving, but over the next three years, the team developed new, lighter-weight diving technology and meticulously trained to be able to dive safely. When they returned to the cave in 2009, they were ready. The cave was very remote and large — in fact, they needed three days just to travel to the sump (the part of the cave that was under water). “It took an entire month just to carry the stuff we needed from the entrance of the cave to the sump to get started.” Almost 30 people were involved.

His reward for all the time and hard work was priceless: After diving in and swimming under water for 10 – 15 minutes, they were the first humans to set up camp on the other side of the sump. “I was scared. I was not particularly comfortable underwater in a cave and I wondered if I had gone too quickly through my training,” he shares. On the other side of the pool in the cave, he and his friend camped for four to five days. “It’s an incredibly memorable feeling.” Beyond the sump were large chambers big enough to walk through, more tunnels and a second sump. While his friend dove through a sump to try to find the way onward, Covington sat alone in pitch black darkness for 20 minutes. He felt totally cut off. His friend had some of the diving equipment that Covington needed to exit the cave, and the nearest other people were three days travel and an underwater tunnel away. But that is just part of being a cave scientist.

Covington could have been a geologist, but if he had the choice to travel through time and change his undergraduate major from physics to geosciences, he wouldn’t budge. “The skills I have now are incredibly useful, and I wouldn’t have been able to get them if I studied geology,” he says. “Also, because I wasn’t trained in the field I didn’t come in with biases about caves. I ask different questions than my colleagues do, which allows me to make a novel contribution.”

He is especially drawn to cave physics as a profession because caving “is something where an average person with an average budget can accomplish original exploration,” he says. “It’s really a curiosity that makes it addictive. The reason I’m a caver is the same reason I am a scientist — it’s like a puzzle. It’s only when you have that drive of curiosity that you can be successful [doing] either science or caving.”