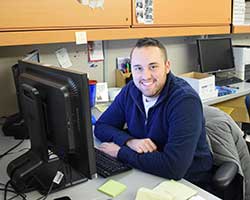 In this series of articles, APS News sits down with APS employees to learn about their jobs, their goals, and the things that make them tick. This month we chat with Units Coordinator Jonathan Burkin, who serves as the intermediary between the Society and its units — the member-led divisions, sections, forums, and topical groups.

What does the units coordinator do?

The units coordinator was a new position when I was hired. The idea was that it would bridge the gap between the units’ executive committees [which include the chair and other leaders of the unit] and the Society itself. They needed someone to get everyone on the same page, and be the liaison or the concierge to the units. So if the executive committees need anything, the coordinator takes care of it. That is what I initially started doing and that’s mainly what I do now, but also, this position took on the Leadership Convocation [an annual meeting of APS leadership, including the executive committees of each unit] and planning the APS Medal event [a new annual Society award].

What services do you provide for the unit leadership?

The biggest service — the one that keeps me most busy — is email communication. Executive Committee officers will send me an email for their membership. I take care of formatting it; I submit it to the communications staff, which gets it ready to send; I approve it; and then it goes out. So that’s what occupies most of my day. In addition to that I take care of writing membership reports and running membership campaigns.

How many emails do you typically handle?

Is it hard to keep track of all the different units and their needs?

I think it just comes with the position. I’ve learned each unit over time. Usually the unit leaders are pretty good at keeping up on their unit statistics. They’re pretty good about keeping in contact with me, and I tell them, “Use me for whatever you need.”

Why should members get involved in a unit?

I think being in a unit helps to classify you within a more specialized group of people. It brings a group of over 50,000 people together in each area of study and I think that’s important, because you’re not just a member of a huge organization, you’re also a member of a subset of people that have similar interests.

Do you have any big projects that you’re working on right now?

I have two big projects right now. The Leadership Convocation is a large undertaking, as is the inaugural APS Medal ceremony. So my desk is filled with menus and programs and stuff. Roughly 100 executive committee officers from the units will participate in convocation. I work closely with our meetings department to book their hotel rooms, pick their meals for the week; and then I take care of all the reimbursement. And for the medal ceremony, I work closely with an event planner, and we have developed the text for the program and the invitation, and the meal.

What is your background?

My background is in marketing and communications. I went to Mount St. Mary’s University in northern Maryland. It’s a small private school.

Did you have any interest in physics before you started?

None whatsoever. However, I think that helps, because I don’t have any bias towards units or towards what their studies or what their goals are. I can just do my job from a marketing and a communications standpoint because that’s what I’ve been trained to do.

You spend a lot of time interacting with physicists. Do they live up to the stereotypes?

No, I think that the stereotype is definitely stronger than how physicists actually behave. All of the executive committee leaders that I come in contact with have been really great. I think at the end of the day you have to remember that they’re just trying to do their job, and they’re extremely intelligent people.

There’s a rumor that you have an unusual talent. Do you want to share it?

Sure. So at four years old I started competitive baton twirling. I’ve been twirling since I was four so that’s twenty-one years. Once I got to college I found there’s a team in Maryland that is one of the world’s best teams. So, a lot like Olympic gymnasts will do — they’ll move to Texas to train with the best gymnastics coaches — I moved to Maryland to train with the best twirling coaches. And since 2010, I have won 12 world gold medals. We’ve been all over the place for the world championships. We were in Belgium, Switzerland, England, and just this past April I was in Italy. And we’ve been successful at each one, which was good. Probably the better talking point is I was a semifinalist on America’s Got Talent in 2008.

This interview has been edited and condensed.