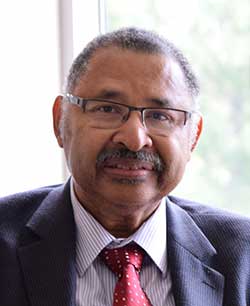 During a recent visit to APS headquarters in College Park, Md., Neal recalled his childhood in the small town of Franklin, Kentucky, a place he described as “highly segregated,” with separate schools and separate waiting rooms in the doctor’s office for white and black patients. Neal’s childhood hobby was ham radio, and he became close friends with another ham operator in his town, who was white. But, as Neal is African-American, leaders in the town disapproved of their relationship.

“We were both astounded, and agreed to stop our communications,” Neal said. “But it did teach me that basically when individuals are working on a scientific project together, the color of one’s skin doesn’t matter. It mattered to others, but it didn’t matter to us.”

APS News sat down with the new president to hear about his priorities for his year leading the Society.

Corporate reform, which began after members voted in its favor in November 2014, restructured APS senior management and redefined the roles of the Council of Representatives and the Board of Directors. “There are several dangling issues that will need follow-up,” Neal said. He plans to work with the Board and APS CEO Kate Kirby to ensure “that if kinks develop, that we take steps to resolve them.”

The most recent APS Strategic Plan, which set the goals for the Society, was created in 2012, before the recent corporate reform. “I and the other members of the presidential line believe that it’s very important to begin the process of updating the plan, especially since so many major changes have been made,” Neal said.

Forming a strategic plan for fundraising will be a top priority for Neal and the APS Development Advisory Committee, which Neal says is “composed of some very fine external members.”

In recent years, APS has worked to boost its contact with industry. Neal would like to continue to strengthen these efforts. Citing his experience as a member of the board of directors of Ford Motor Company, “I believe I have something to offer there,” Neal said.

Nurturing Relations with Other Societies

Neal would also like to work together with organizations like the American Institute of Physics (AIP) and the American Association for the Advancement of Science. “What one could do would be to identify areas where we have similar goals.” Neal has already met with AIP CEO Robert Brown, he said. “We agreed to continue our discussions about ways we might cooperate.”

Science is an increasingly international effort, and many cutting-edge facilities are located overseas. “I would like to see APS consider study-abroad programs for physics students as something that should be embraced,” Neal said. “And if that were to occur, I would propose trying to get an endowment to help support such programs. That would be doing something that I don’t think anyone else is really doing.”

“I’ve been continually surprised at the small number of minorities choosing physics, so that should be another priority,” Neal said. “Diversity efforts are already underway but challenges remain.”

The Plight of Research Scientists

Neal hopes to draw attention to research scientists who have received a Ph.D. and done a postdoc, before entering into a long-term, untenured position in a research group. If these scientists lose their funding, “We have situations where 40-year-old, 45-year-old people with a large salary are just being kicked out the door when their work is finished, and it’s hard for them to find jobs,” Neal said.

Neal plans to maintain the Society’s contacts with Congress and scientific agencies. He also hopes to establish a more prominent presence in Washington. Neal is a member of the Council for the Smithsonian National Museum of African American History and Culture, which opens this year on the National Mall in Washington DC. “One of my concerns is what’s going to be done to help little kids see that science can be interesting.” Neal said. “APS might help in laying out the science exhibits that should go into that museum, both helping with outreach itself, but also giving APS more visibility on the Mall.”