Tunnel Visions: A Brief Comparison of the SSC and LHC Projects 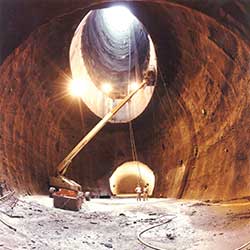 View along the SSC's main ring tunnel, as seen while under construction in early 1993.

Prologue: In late 1993 the U.S. Congress cancelled the Superconducting Super Collider(SSC), an enormous proton accelerator designed to attain a collision energy of 40 TeV, nearly triple that of the Large Hadron Collider (LHC). While the SSC’s failure left widespread bitterness and an empty tunnel in Texas, the LHC went on to allow discovery of the long-sought Higgs boson. What follows is an excerpt from Tunnel Visions, a comprehensive history of the rise and fall of the SSC recently published by the University of Chicago Press.

While the Large Hadron Collider project at CERN also experienced trying growth problems and cost overruns, increasing from an estimated 2.8 billion Swiss francs in 1996 to more than 4.3 billion Swiss francs in 2009, it managed to survive and eventually discover the Higgs boson — using only about half its original design energy. When labor costs and in-kind contributions from participating nations are included, the total approaches $10 billion, a figure often cited in the press. This achievement in the face of problems similar to what the SSC project experienced, if not as severe, raises the obvious question: why did CERN and its partner nations succeed where the United States had failed?

From its early days, many thought the SSC should have been sited at or near Fermilab, taking advantage of the existing infrastructure there, both physical and human. CERN had done so for decades, building one machine after another as extensions of its existing facilities and reusing parts of the older machines in new projects, thereby limiting costs. Perhaps as important, CERN had also gathered and developed some of the world’s most experienced accelerator physicists and engineers, who worked together smoothly as a team. Fermilab had equally adept machine builders, (and substantial physical infrastructure), who could have turned to other productive efforts when the inevitable funding shortfalls occurred during the annual Congressional appropriations process. And the troublesome clashes that occurred at the SSC project between high-energy physicists and engineers from the U.S. military-industrial complex would not have erupted in the already well-integrated Fermilab culture.

These pro-Fermilab arguments however ignore the realities of the American political process. A lucrative new project costing over $5 billion and promising more than 2,000 high-tech jobs cannot be “sole-sourced” to an existing U.S. laboratory, no matter how powerful its Congressional delegation. As politically astute Department of Energy leaders recognized, the SSC project had to be offered up to all states able to provide a suitable site, with the decision based (at least publicly) on objective, rational criteria. A smaller project costing less than $1 billion and billed as a major upgrade of existing facilities might have been sole-sourced to Fermilab, given the political climate of the mid-1980s, but not one as prominent and costly as the SSC. It had to be placed on the US auction block, and Texas made the best bid according to the official DOE judgment criteria.

Unlike the SSC, the LHC project had solid project management throughout by a single physicist, [Lyn Evans], who had decades of experience with proton colliders. Despite major problems and cost overruns that eventually exceeded 40 percent, Evans enjoyed the strong support of the CERN management, as well as from a deeply experienced cadre of physicists and engineers who worked together without the cultural clashes that occurred at the SSC Lab. And on the LHC project, engineers reported ultimately to physicists, the users of the machine best able to make the required tradeoffs when events did not play out as originally planned. The LHC project encountered daunting difficulties, serious delays and major cost overruns, too, but its core management team led by Evans held together and worked through these problems. They also shared a common technological culture — as well as understood and supported the project’s principal scientific goals. Similar observations cannot be made regarding the military-industrial engineers who came to dominate SSC construction.

CERN also enjoys an internal structure, governed by its Council, that largely insulates its leaders and scientists from political infighting in and machinations of individual member nations. Unlike in the United States, the lab director or project manager cannot be hauled before a parliamentary investigations subcommittee and required to testify under oath about management problems or cost overruns. Nor did the project face annual appropriations battles and threats of termination, as do major U.S. projects. Serious problems that arose, for example a large cost overrun in 2001, had to be addressed in the Council, which represents the science ministries of member nations and generally operates by consensus, especially on major new projects like the LHC. This governing structure ultimately helps maintain control of a project within the hands of the scientists involved, instead of allowing politicians or other government officials to intervene.

Because the Council must also address the wider interests of European science ministries, CERN leaders have to be sensitive to the pressures its annual budget, new projects, and cost overruns can exert on other worthy science. In this way, European small science had a valuable voice that was heard within the CERN governing process. The LHC project had to be tailored to address such concerns before the Council would grant it final approval. No similar mechanism existed within U.S. science, except for other, disgruntled scientists to complain openly in prominent guest editorials and before Congressional hearings after SSC costs got out of hand in 1989-1991. The consequent polarization of the U.S. physics community helped undermine what had originally been fairly broad House support for the project.

And because of such financial pressures, CERN had to effectively internationalize the LHC project — obtaining major commitments from non-member nations such as Canada, China, India, Japan, Russia and the United States — before going ahead with it. These contributions enabled Evans and his team to proceed with a collider design able to reach the full 14 TeV collision energy rather than with the initial phase of a down-scoped, two-phase project that might have been buildable with reduced funding. When the LHC project finally gained Council approval in 1996, it was a truly international scientific project with firm financial backing from more than 20 nations worldwide.

And in the final analysis, the LHC was (somewhat fortuitously) much more appropriately sized to its primary scientific goal: the discovery of the Higgs boson. The likelihood that this elusive quarry could turn up at such a low mass as 125 GeV was not well appreciated until the late 1980s, when theories involving supersymmetry began to suggest that such a light Higgs boson might well occur. But by then the SSC dice had been cast — in favor of a gargantuan 40 TeV collider that would be able to uncover the roots of spontaneous symmetry breaking even if such phenomena were to occur at masses as high as 2 TeV.

After that fateful decision, which was endorsed unanimously by a HEPAP subpanel but added billions to the SSC cost, the U.S. high-energy physics community committed itself to an enormous project that became increasingly difficult to sustain politically amidst the worsening fiscal climate of the early 1990s. With the end of the Cold War and subsequent lack of a hoped-for peace dividend during a stubborn recession, the United States had entered a period of austerity not unlike what is occuring today in many developed Western countries. In this constricted fiscal environment, a poorly understood basic-science project experiencing large cost overruns and lacking major foreign contributions posed an easy political target for Congressional budget-cutters to “sacrifice.”

A 20 TeV proton collider — or perhaps just a billion-dollar extension of Fermilab facilities such as the Dedicated Collider proposed in 1983 — would likely have survived the budget axe and discovered this light Higgs boson long ago. For another option on the table during the 1983 meetings of the Wojcicki Supbanel was to have continued construction of Brookhaven’s CBA/Isabelle collider while beginning design work on an intermediate-energy 4-5 TeV Fermilab machine, whose costs were then projected at about $600 million. This more conservative approach would have maintained the high-energy physics research vitality of these two productive DOE laboratories for at least another decade. And such smaller projects would surely have been more defensible during the economic contractions of the early 1990s, for they accorded better with the U.S. high-energy physics community’s diminished political capital in Washington. Their construction would also have proved much easier for physicists to manage and control without having to involve military-industrial engineers.

Instead, the U.S. high-energy physics community elected to “bet the company” on an extremely ambitious 40 TeV collider so large that it would probably have to be sited at a new scientific laboratory in the American Southwest. Such a choice was to abandon the three-laboratory DOE system that had worked so well for nearly two decades and fostered U.S. leadership in the field. Perceived European threats to this hegemony tipped the balance toward making the SSC a national project and away from it becoming a truly international world laboratory as others were advocating.

Unlike historians gazing into the past, however, high-energy physicists do not enjoy the benefit of hindsight when planning a new machine. Guided partly by the dominant theoretical paradigm, they work with a cloudy crystal ball through which they can only guess at phenomena likely to occur in a new energy range, and must plan accordingly. And few can foresee what may transpire in the economic or political realms that might jeopardize such an enormous project requiring about a decade to complete and costing billions of dollars, euro, or Swiss francs — or, relevantly today, a trillion yen. This climate of uncertainty argues for erring on the side of fiscal conservatism and for trying to reduce expenses by building a new machine at an existing laboratory, thus recycling its infrastructure, both physical and human. Such a gradual, incremental approach has been followed successfully at CERN for six decades now, and to a lesser extent at other high-energy physics labs.

But U.S. physicists elected to stray from this well-worn path in the case of the Superconducting Super Collider. It took a giant leap of faith to imagine that they could construct an enormous new collider with over 20 times the energy of any machine that they had previously built, at a green-field site where everything had to be assembled anew from scratch — including its management team — and defend the project before Congress in times of fiscal austerity. A more modest project sited instead at Fermilab (or Brookhaven) would likely have weathered less opposition and still be producing good physics results today. As one leading high-energy physicist acknowledged in hindsight, the SSC was probably “a bridge too far” for this once-powerful scientific community.

Michael Riordan has taught the history of physics and technology at Stanford University and the University of California, Santa Cruz. He is author of The Hunting of the Quark and coauthor of Crystal Fire and The Shadows of Creation. He currently lives and works in Eastsound, Washington.

Lillian Hoddeson, the Thomas Siebel Professor Emerita of the History of Science at the University of Illinois, is coauthor of Crystal Fire, Critical Assembly, True Genius, and Fermilab.

Adrienne W. Kolb, until recently the Fermilab archivist, is coauthor of Fermilab.