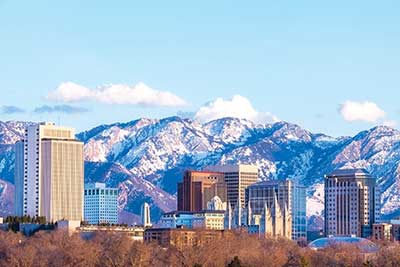 Coming soon to Salt Lake City, Utah: the 2016  APS April Meeting! The meeting takes place Saturday, April 16 through Tuesday, April 19 at the Salt Palace Convention Center. The meeting will feature research from the APS divisions of astrophysics; computational physics; nuclear physics; particles and fields; and physics of beams, along with a variety of forums and topical groups.

Organizers expect about 1300 attendees. With 71 invited sessions, 94 contributed sessions, three poster sessions, and over 1000 papers presented, attendees should have plenty to do.

Three plenary sessions throughout the meeting will feature distinguished speakers and important topics.

The Fred Kavli Plenary Session will take place on Monday, and neutrinos will take center stage, in honor of the 60th anniversary of the first detection of neutrinos by Frederick Reines and Clyde Cowan. The session will showcase talks from the 2015 physics nobel laureates, Arthur McDonald of Queen’s University in Kingston, Canada and Takaaki Kajita of the University of Tokyo. Neta Bahcall of Princeton University will speak about the solar neutrino problem and the work of her late husband, John Bahcall.

Tuesday’s plenary session commemorates the 60th anniversary of Tsung-Dao Lee and Chen-Ning Yang’s proposal to test for the violation of parity conservation in the weak interaction,which was demonstrated by Chien-Shiung Wu. The session’s theme is “Symmetries.” Gerald Gabrielse of Harvard University will give a talk entitled, “Stringent Low Energy Tests of the Standard Model, Its Symmetries and Modifications,” and Xiaochao Zheng of the University of Virginia will speak about experiments probing parity violation using electrons at GeV energy. Finally, Edward Witten of the Institute for Advanced Study in Princeton, will give a talk titled “Symmetry and Geometry.” Witten is the winner of the 2015 APS Medal for Exceptional Achievement in Research, awarded for “discoveries in the mathematical structure of quantum field theory that have opened new paths in all areas of quantum physics.”

Lisa Randall of Harvard University will give a public lecture titled “Dark Matter and the Dinosaurs: The Astounding Interconnectedness of the Universe.”

A welcome reception on Saturday evening will occur in conjunction with the first poster session. At the Nobel Reception on Monday night, attendees will have the opportunity to meet winners of the Nobel Prize in physics. And on Sunday, the APS Prizes and Awards Ceremony will honor scientists who have made significant contributions to physics.

Several events will focus on careers and professional skills. A panel discussion on career opportunities for physicists is aimed at students or physicists early in their careers. Two workshops on communication and negotiation will cover topics ranging from teamwork, to negotiation tactics, to dealing with difficult professional situations.

For physicists looking to learn more about publishing in and refereeing for APS journals, there will be a tutorial with presentations from APS editors, and a reception at which editors will be on hand to answer questions.

The Committee on the Status of Women in Physics (CSWP) is hosting a meet and greet on Sunday evening. Also on Sunday, there will be an Education and Diversity Reception hosted by CSWP, the Committee on Minorities in Physics, and the Forum on Education. All are welcome to attend both events to network and unwind.

For undergraduate attendees, the meeting will feature the Future of Physics Days sessions. On Saturday, a panel of grad students will answer questions about graduate school over lunch. On Sunday, an award ceremony will honor the top undergraduate speakers and poster presentations at the meeting.

For early birds, or those who simply can’t pack enough into the four days of the April meeting, there are the pre-meeting events on Friday. These include a workshop on integrating computation into the undergrad physics curriculum, the APS Business Meeting, and a “tweetup” for social media buffs who plan to chronicle the meeting on twitter.

We hope to see you there!