We present our selection of the top ten physics stories that made it into newspapers and onto televisions in the U.S. and across the world in 2015. These may not be the most scientifically notable events, but they are the ones that captured the public imagination.

The ideal gas law rarely makes headlines, but last January it was on the lips of journalists everywhere. After the New England Patriots football team was accused of intentionally deflating footballs in a playoff game — which they won, to go on to a Super Bowl victory — physicists weighed in.  Could the temperature difference between the locker room and the outside air explain why the footballs tested at lower pressures than regulations required? And if a simple ideal-gas-law effect can’t explain the amount of deflation (as many scientists argued), could the rainy weather have contributed by moistening the balls? The debate rages on — especially for Patriots fans. 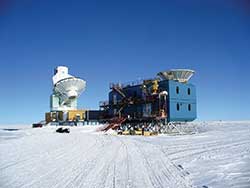 In a disappointing end to a story that enthralled the public when it first made headlines in 2014, BICEP2’s claimed detection of primordial gravitational waves was definitively refuted in 2015. In January, a joint analysis from BICEP2 and the European Space Agency’s Planck collaboration concluded that the observations of swirling patterns in the polarization of the Cosmic Microwave Background could be chalked up to dust in our galaxy, instead of inflation in the early universe. For now, the search continues.

Neutrinos raked in the awards this past year. In October, the 2015 Nobel Prize in Physics went to the leaders of the Sudbury Neutrino Observatory and Super-Kamiokande experiments, for the discovery that neutrinos oscillate, and therefore have mass. And the Breakthrough Prize in Fundamental Physics — a glitzy, modernized version of the Nobel with larger monetary prizes but less prestige — went to a slew of neutrino oscillation experiments. Instead of honoring just a few winners, the Breakthrough Prize recognized the full collaborations — a total of more than 1,300 individual physicists. 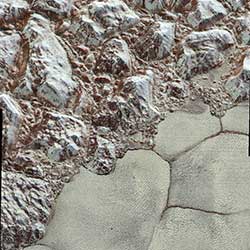 Perhaps the biggest science story of the year, NASA’s New Horizons spacecraft sent breathtaking photos of Pluto back to Earth in July after its ten-year journey to the dwarf planet’s distant neighborhood. Far from being a boring, dead world, scientists found plenty of surprises: unblemished plains of nitrogen and methane ice, free from impact craters; towering mountains of water ice; and an extended, hazy atmosphere.

A Special Year in Physics

2015 marked one hundred years since Einstein formulated his theory of general relativity, and humanity is still awed by his achievements. From Science to Discover magazine, publications celebrated the famous scientist’s work, explaining the theory and its history — and the public ate it up. Last year was also the International Year of Light and Light-based Technologies, as designated by the United Nations. Special events organized across the globe celebrated optics, photonics, and light-related sciences.

In 2015, world powers negotiated a nuclear deal with Iran to lift sanctions in exchange for restrictions aimed at preventing the country from acquiring nuclear weapons. U.S. Secretary of Energy Ernest Moniz, a physicist, played a major role in the negotiations, and in championing the final agreement to skeptical politicians and the public. Other physicists used their expertise to weigh in on the science side of the deal. Many prominent physicists, including several Nobel laureates, signed a letter supporting the deal in August. The only physicist in Congress, Representative Bill Foster (D-IL), spent extra time scrutinizing the agreement, and eventually came out in support of it as well.

A pair of high-profile cases of Chinese-American scientists accused of spying for China were resolved when government prosecutors dropped the charges without explanation. The latest case involved physicist Xiaoxing Xi, who made the front page of the New York Times when charges against him were dismissed in September. In March, the government dropped charges against Sherry Chen, a National Weather Service hydrologist. Members of Congress claimed the spate of cases indicates a pattern of racial profiling and called for an investigation by the Department of Justice.

The Large Hadron Collider Strikes Back 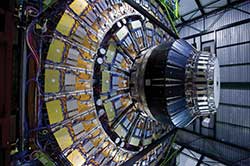 The Large Hadron Collider (LHC) once again made headlines as it revved up to higher energy. In June, the LHC began slamming protons together at 13 TeV, stoking scientists’ dreams of discovering evidence of supersymmetry, explaining dark matter, and better understanding the Higgs boson. The LHC also proved that it has more than just the Higgs up its sleeve, with the LHC collaboration’s announcement of the discovery of pentaquarks, which are, as the name suggests, particles made up of five quarks. The discovery, which was somewhat esoteric for public audiences, begat headlines like “What the Heck is a Pentaquark?”

Scientists announced in August that hydrogen sulfide is superconducting at a record-high temperature of 203 K — but only when subjected to crushing pressures of about 1.5 million atmospheres. This story received press coverage in part due to its connection to everyday life … and everyday smells. As a gas, hydrogen sulfide lends its odor to the stench of rotten eggs and flatulence.

There is no getting around it — the quantum realm is undeniably strange. In particular, quantum entanglement is real, according to a new, more stringent experimental test, scientists announced in August. Such tests, named after theorist John Bell, measure the correlation between two entangled particles. The new Bell test eliminated loopholes found in previous tests, and showed that weird quantum behavior can’t be explained by “hidden variables” that could make the quantum world more palatable to our macroscopic sensibilities.