Getting Amped for a Nikola Tesla Museum 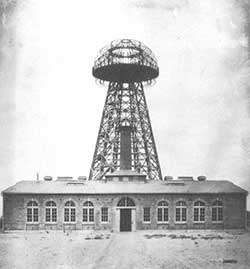 Image of Tesla's tower (now demolished) from 1904. Tesla aficionados want to turn the original lab building into a science museum.

An otherworldly light show blazed across the skies of Long Island, NY on several nights in July 1903, startling residents as far away as Connecticut with a display of massive electrical sparks emanating from a tower of wood and steel nearly 200 feet tall.

The people of Long Island had famed physicist and inventor Nikola Tesla to thank for the electrical theatrics. He had constructed this tower at his lab on a tract of land previously home to a potato farm, in what is now the modest town of Shoreham, NY. The tower’s purported purpose: providing free, wireless electricity to the entire planet. But it was never finished, and Tesla tested his equipment only once before he lost funding. A bubbling undercurrent of rumors about the laboratory and its peculiar history has persisted in Shoreham ever since.

A community group has been working for decades to preserve the site, known as Wardenclyffe — named after the owner of the potato farm. With help from an internet crowdfunding campaign that raised over $1 million, the nonprofit Tesla Science Center at Wardenclyffe finally purchased the land in May 2013. The group plans to establish a science museum on the property, and perhaps solve some of the lingering mysteries about how the site was used, and how Tesla hoped to accomplish his improbable goal.

“[Tesla’s] life story has a way of sparking your imagination,” says Tesla Science Center President Jane Alcorn. “So he draws you in, but then, as you begin to work on something like this … you see what it can do for a community and a region.” Alcorn, a dynamo of science education in Shoreham, has maintained an unwavering focus on the project over the past 20 years.

Although physicists are familiar with Tesla, or at the very least with the unit of magnetic field strength named after him, many members of the public have never heard of him. A prominent scientific figure in his day, he had largely faded out of view until a recent surge of interest propelled by internet science enthusiasts.

Tesla is known for his contributions to early electrical technology, particularly his development of an alternating current (AC) system and an AC induction motor. Entrepreneur George Westinghouse purchased Tesla’s AC patents, and lit the 1893 World’s Fair using the technology. During the infamous “War of the Currents,” Tesla and Westinghouse faced off against Thomas Edison (who favored direct current). AC eventually emerged victorious, becoming the foundation for our current electric power system.

Tesla also worked on wireless communications, X-ray research, fluorescent lighting, and many other projects. A prolific inventor, he held hundreds of patents. Tesla even created a remote-controlled boat that awed the turn-of-the-century public. And artificial-lightning shows with his Tesla coils are a fixture at science museums.

Despite his technical brilliance, Tesla was not a financial success. After he lost funding from his investor, J.P. Morgan, the Wardenclyffe project faltered, and Tesla fell into debt. Wardenclyffe is the only remaining Tesla laboratory; the tower, however, is long gone, demolished in 1917 and sold for scrap.

Now, only remnants of Tesla’s audacious venture survive on the long-neglected site. On a bright autumn afternoon at Wardenclyffe, Christopher Wesselborg strides across the base of the former tower — an octagonal ring of cement and granite blocks, each sporting a thick metal stud that once connected to the tower. Wesselborg, vice president for technology for the Tesla Science Center and Physical Review C managing editor (based at the nearby APS Editorial Office in Ridge) describes the structure that once dominated the site: It was 187 feet tall, with a spiral staircase that plunged 120 feet into the earth and reportedly connected to a network of tunnels.

The center of the tower ring is now filled in with soft green grass — it seems a likely spot for a picnic. But until recently, says Wesselborg, “this was one of the dirtiest places on Long Island.” The company that later occupied the site, Peerless Photo Products (later purchased by Agfa), disposed of chemicals on the land between 1939 and 1979, contaminating it with silver and cadmium. The property was designated a New York State Superfund site, and — after decades in limbo — Agfa completed the cleanup and put the property up for sale in 2012.

Tesla Science Center went to work trying to protect the site from developers looking to snatch it up. Attempts to get a benefactor to purchase the property fell flat, until the group harnessed the power of the Internet. The community group teamed up with the creator of the webcomic The Oatmeal, cartoonist Matthew Inman, an avid science fan who had created a comic lauding Tesla. Together they started a crowdfunding campaign on the website Indiegogo, which galvanized the public and raised $1.4 million — more than enough to purchase the property. “That it was so successful was simply beyond our dreams,” Wesselborg says. “We were definitely looking for that somewhere, that light at the end of the tunnel.”

Across from the tower base, Margaret Foster, a member of the Tesla Science Center’s board of directors, surveys the facade of a squat red brick building with arched windows and a tall chimney; the building is still cheerful despite its disrepair. This was Tesla’s laboratory, says Foster, an editor for Physical Review A and Physical Review E. Restoring the building, which was designed by the American architect Stanford White, is a major priority for the group.

The first step, removing asbestos, is already complete, says Foster, but much more remains to be done before it will be ready for the public. In 2014, the group received a one million donation from Elon Musk, CEO of electric car company Tesla Motors, for the purpose of restoring the building. Eventually, replicas of Tesla’s equipment will show visitors what the lab was like in Tesla’s day.

Other buildings on the site will be converted to offices, meeting rooms, and spaces for educational programs. If all goes well, the first building will be ready for the public by the summer of 2016. The group plans to create a “living museum” with classrooms, community programs, and a “maker lab,” a place where people can come together to build, invent, and create. “Since Tesla was an inventor and his workshop was a place to do that kind of thing, it seems appropriate,” says Alcorn.

The group continues to raise funds to aid the long, expensive process of creating the museum. A crowdfunding campaign currently offers donors the chance to inscribe a brick with text of their choice, to be used to pave the site. Although the full museum won’t be ready anytime soon, the group is glad that, after two decades of trying, Tesla’s legacy is finally secured.

“You just have to be patient for some things and they come about in their own time,” says Alcorn. “This has so many people who believed in it. ... How could you back down?”

Editor’s Note: The author grew up in the neighboring town of Wading River, New York, and has family members who have been involved in the effort.