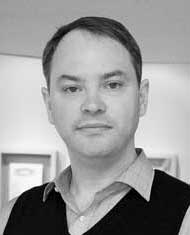 On December 1, APS announced the appointment of Matthew Salter as its publisher, a new position created in the governance reform that began in 2014. Salter will come onboard in January 2016, and will be responsible for the business operations of APS journals.

The role of publisher, Salter says, is primarily to support the dissemination and publication of the peer-reviewed research reported in the journals. The job includes marketing and advertising the journals, ensuring that they are cost-efficient, developing new projects, and interfacing between the editorial arm of the Society and the rest of APS.

“I think APS has a wonderful position in terms of its authoritative voice in physics, not just in the United States but across the world,” Salter says. “The publisher can be a big part of that — making sure that the journals are positioned in the market and against the competitors such that we really are able to go out there and continue getting the very top papers.”

Because the position is new, “There’s a lot of potential for developing that role,” says Salter, “and that’s going to be challenging and really exciting.”

Salter earned his Ph.D. in organic chemistry from Imperial College London, and has held research positions there and at Tohoku University. He was a lecturer in chemistry at King’s College London, and a group leader at the University of Tokyo. Salter then left academia for a position in chemical sales, before taking on a series of publishing jobs based in Tokyo, first for Nature Publishing Group, and later for Institute of Physics (IOP) Publishing. He most recently served as associate director of journals for IOP Publishing in the Asia-Pacific Region.

Salter’s interest in science communication is what drew him to the field of publishing, he says. “There’s an important process that goes on between discovery in a laboratory or in an academic setting and communicating that research to other researchers and also to the public. I’ve always been interested in that process of how information is transmitted and disseminated.”

In coming years, APS will face the challenges of a changing media environment, Salter says. “I think it’s important that all publishers and certainly APS are sufficiently agile to be able to respond to things we can’t see now.” A decade ago, no one was talking about reading media on tablets, or the importance of social media, he points out. “APS has got to be in the forefront of making sure that we keep up with and anticipate any trends in dissemination of content.”

Open access is another change looming on the horizon. How to offer and fund open access is a conundrum all publishers are currently facing, as is the handling of big data and making data available to the public, Salter says. And meanwhile, the journals will also face competition from other publishers, as all journals do.

But APS is well positioned to be successful, despite these obstacles, Salter says. “The challenge is to ... not rest on our laurels and really make good use of the very good position that the APS is in.” And there are opportunities for APS as well: “We’re in a great position to set the debate and set the direction of publishing in certain fields,” Salter says.

Salter brings considerable experience with scientific publishing in the Asia-Pacific region, an area crucial for physics research: In 2014 over 17 percent of APS published papers had corresponding authors hailing from that part of the globe. “The quality and quantity of research coming out of Asia has just been, certainly over the last ten years, just going up and up,” Salter says. “So there are huge opportunities in Asia.”

Salter hopes to continue strengthening the journals’ strong reputations in Asia, and perhaps expanding to new projects there. “I think depending on how the feeling is within the Society and editorial, there are also opportunities of leveraging that brand of Phys Rev series to look at potential partnerships and starting new journal projects ... focusing on Asia.”

The Asia-Pacific market, Salter says, continues to grow and change. Scientific research in Southeast Asia, China, and India is rapidly evolving, but the regions maintain one consistent thread: “Wherever you go that I’ve been in Asia … there is a huge respect for the APS journals. So I think our stock is very high,” Salter says.

Salter is looking forward to working at APS: “Coming to work for the largest physical society in the world, with a hugely popular and high-quality and renowned set of journals, is a tremendous honor and a huge challenge,” Salter says. “I will admit to being slightly nervous — it’s a big job to take on.”