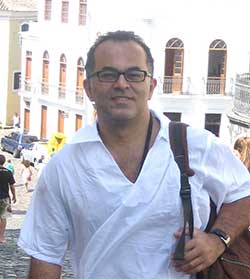 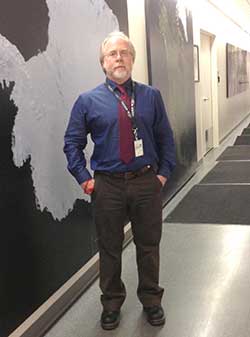 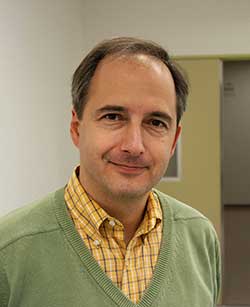 Earning a doctorate is usually cause for celebration. But when Sassan Saatchi graduated in 1988 from George Washington University with a Ph.D. in electrical engineering and math, he instead became “extremely depressed. … [my thesis] was a document full of equations,” he says. “It hardly had any applications.”

Saatchi found the solution to his quandary as a postdoc at NASA’s Goddard Space Flight Center (GSFC) in Greenbelt, Maryland, where he worked on a sensor to study Earth’s soil moisture. The project had a clear purpose, Saatchi says, and more importantly, it opened the door to a career in remote sensing — using reflected electromagnetic radiation to gather information about faraway objects.

While at GSFC, Saatchi began traveling to nearby forests with researchers who were “ground-truthing” measurements taken from airplanes and satellites. Forest research and management had for decades relied on ground-based measurements, but these are labor-intensive and can only ever sample a tiny fraction of the world’s approximately three trillion trees.

By contrast, remote sensors aboard airplanes and satellites can look down from above and take data over wide areas — potentially the planet’s entire surface. To harness this potential, researchers have to carefully calibrate sensors and data-processing algorithms to measurements of actual trees, so they can accurately interpret their raw data. This is what Saatchi did on his field trips to local forests, and later to much more remote ones such as the tropical rainforests of Brazil’s Amazon and the Congo in central Africa.

After his postdoc, Saatchi moved to NASA’s Jet Propulsion Laboratory in Pasadena, California, where he has worked ever since. He has spent the last 25 years finding ways to gather more and better data on Earth’s ecosystems. Saatchi specializes in radar and lidar systems—two different but related approaches that involve not just collecting reflected or emitted light, but actually shaping and delivering the pulses of incident light.

Radar is the more mature remote-sensing technology and relies on measuring microwaves sent down from a satellite or airplane and reflected back up by a surface. Its view is wide but relatively coarse, and it can penetrate clouds, which obscure around two-thirds of Earth’s surface at any given time. By contrast lidar, which uses short pulses of light, can yield higher resolution, but the lasers involved are relatively expensive and fragile, and only recently have scientists developed techniques to deploy it efficiently over large areas.

Remote sensing’s maturation comes at a critical time, Saatchi says, because scientists and policy makers are increasingly asking global-scale questions about forests, and specifically how much they can absorb carbon dioxide and limit global warming. For several decades scientists have approached this question in piecemeal fashion, but in 2011 Saatchi led a team that combined data from four different radar and lidar studies and published a global map of carbon stored in the world’s tropical forests. Tight resources meant that Saatchi’s team had to innovate — all the instruments were designed for other purposes in other projects.

Innovation is also key to bridging the gap between ecologists who can identify important research questions but often lack technical expertise, and engineers who need specifications for the remote sensing technology they’re designing. The skill set needed is a perfect match for the rigorous training of a physicist, Saatchi says. “The earth system is as complex mathematically … as string theory. It’s really tough to understand it and to quantify it.”

Like Saatchi, Phil DeCola started his remote-sensing career in a physics lab. As a graduate student, DeCola came across a 1959 paper in Reviews of Modern Physics suggesting that his specialized research could have relevance far beyond condensed matter physics, for instance by helping astronomers interpret the light of distant stars and planets. The paper was inspiring, DeCola says, though he adds, “at the time I had no idea that remote sensing of the Earth and other planets could actually be a career.”

DeCola started to see his way forward during a postdoc at GSFC in planetary science. His main research involved measuring Jupiter’s atmosphere, but he also began hanging out in colleagues’ labs and contributing to their Earth-focused remote-sensing projects. Despite his aptitude for science, DeCola soon felt himself drawn toward policy work, so he applied for a fellowship at the White House. NASA higher-ups heard about this and recruited him to NASA’s D.C. headquarters instead.

At headquarters, DeCola helped develop a number of Earth science-focused remote sensing missions, including the Orbiting Carbon Observatory (OCO), a satellite designed to measure the concentration of carbon dioxide in Earth’s atmosphere. Scientists had for decades measured carbon dioxide from the ground (the most famous site is on Mauna Loa in Hawaii), and such measurements continue to be critical for establishing an accurate benchmark. But localized measurements cannot tell policy makers and others hoping to actually reduce carbon dioxide emissions where on Earth carbon is actually being emitted and taken up.

To add this dynamic global view, OCO designers turned to spectroscopy, the topic of DeCola’s Ph.D. thesis. Carbon dioxide absorbs a characteristic set of wavelengths of infrared light — this is what makes it a greenhouse gas — so NASA engineers, with DeCola’s leadership, designed and built a sensor to measure how much of those wavelengths a column of atmospheric CO2 removes from sunlight reflected from Earth’s surface. Because CO2 is so dilute in the atmosphere — only about 4 parts in 10,000 — deputy project scientist Annmarie Eldering has called the measurement “one of the most difficult observations to make from space.”

DeCola finally made it to the White House in 2007 as an adviser in the Office of Science and Technology Policy. Soon thereafter, the rocket that should have carried OCO to space crashed into the ocean with the satellite attached, dealing a potentially devastating setback to NASA’s carbon monitoring program. DeCola argued that the agency should rebuild the satellite because of its importance to the nation, and NASA’s 2011 budget request included $170 million for OCO-2, essentially a copy of OCO. OCO-2 launched successfully in 2014 and has started delivering data that scientists hope will answer big open questions about the carbon cycle, including how and where does Earth’s land surface take up roughly 2.5 billion tons of CO2 annually?

Returning to his scientific roots, DeCola joined Sigma Space Corporation in 2010, where he helped design and test a new lidar system to quickly yet precisely measure forest carbon from airplanes. In November 2015 he flew to Europe for the UN climate talks to tell policy makers about the capabilities that scientists utilize to monitor whether countries’ climate commitments are successful. “I’m doing both now — research and proof-of-concept of [remote sensing] capabilities, and … ‘meta-level science’, as I like to call it,” he says. “Making sure that evidence-based information … is being used effectively to guide policy.”

A Lofty Career Grounded in Physics

Among a team of high fliers, GSFC’s James “Bryan” Blair might be the highest-flying of all. He recently returned from two weeks flying at 45,000 feet over the Antarctic Peninsula with the Land Vegetation Ice Sensor (LVIS), an instrument designed to demonstrate the capabilities of lidar-based remote sensing.

LVIS sends out a precisely shaped pulse of laser light, and its sensor measures the pulse’s return time and shape. This allows researchers to pinpoint surface elevation to 10-centimeter accuracy. Another innovation has enabled them to map huge areas, like a large section of the 522,000-square-kilometer peninsula, a capability that Blair says many in remote sensing previously considered out of reach for lidar.

Pushing the boundaries of precision mapping is nothing new for Blair. After studying math, physics, and computer science in college and graduate school, his first job was designing an altitude-measuring laser for the Mars Orbiter Laser Altimeter, launched in 1996. By 2001, the sensor had produced a map of Mars that had better topographic precision than the best map of Earth’s continents.

Blair went on to help design other remote-sensing instruments, including the laser on the Ice, Cloud, and land Elevation Satellite (ICESat). ICESat’s primary purpose, as the name suggests, was to measure the elevation of ice sheets. On a plane flight to test a prototype laser over Greenland, Blair left the device on over a forest in upstate New York. “All of a sudden we were getting all these signals that were stretched out and distorted and complicated,” he recalls. The signals turned out to contain rich information about the forest’s structure as well as its height. More than a decade later, forest measurements from ICESat played a key role in Saatchi’s 2011 tropical carbon map.

Blair is now leading the design of the Global Ecosystem Dynamics Investigation (GEDI), which will put lidars inspired by those of ICESat and LVIS onto the International Space Station. GEDI will deliver “orders of magnitude” more forest height and structure data than ecologists have ever had access to, Blair says. Meanwhile, the scientists are already designing new lasers for future Earth and planetary science missions, some of which haven’t even been conceived yet.

Like Saatchi and DeCola, Blair has built a career using light to observe Earth, and like his colleagues, he credits his physics and math background for being able to contribute in the way that he has. “If I didn’t have a good grounding in physics and math,” he says, “I wouldn’t be able to do almost all of the stuff I’m doing now.”

The author is a freelance writer based in Mount Rainier, MD.

Editor's note: This article was updated on January 4, 2016, with several post-publication corrections.