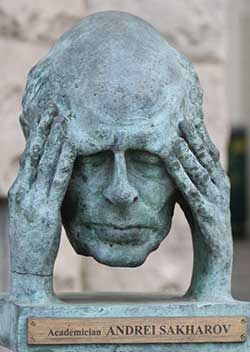 Sculpture of Andrei Sakharov by Peter Shapiro, outside the Russia House Restaurant & Lounge on Connecticut Ave in Washington, D.C.

Andrei Sakharov became famous as a young physicist for being the father of the Soviet hydrogen bomb — Russia’s version of J. Robert Oppenheimer. But he eventually became a staunch advocate of nuclear test ban treaties, and a passionate crusader for human rights in the final days of the Soviet Union.

Born in Moscow to a physics teacher, the young Andrei was raised to love both literature and science — and music, since his father was a gifted pianist. Home-schooled for his early education, he began his physics studies at Moscow University in 1938, at a time when many of its best teachers had been purged for political reasons. Then the Germans invaded in 1941, and he found himself juggling his coursework with air raids. The students were forced to evacuate to Central Asia. Conditions were harsh. Sakharov recalled spotting a spice cake in the snow during that month-long journey; he was so hungry he devoured it.

He was exempted from military service during World War II for medical reasons, only later appreciating his good fortune. He survived; many other young men did not. He worked at a munitions factory in Volga as an engineer instead, inventing a magnetic device to detect shrapnel in wounded horses, and managing to write a few scientific articles on theoretical physics. They weren’t published, but it gave the young man confidence to pursue a Ph.D. at the Physical Institute of the USSR Academy of Sciences (FIAN) in Moscow. He completed his studies in 1945, just as the war was drawing to an end.

Sakharov recalled first hearing about nuclear fission from his father, but it didn’t make a strong impression on him until news broke of the bombing of Hiroshima on August 6, 1945. “I was so stunned that my legs practically gave way,” he wrote in his memoirs. “There could be no doubt that my fate and the fate of many others, perhaps of the entire world, had changed overnight.”

His mentor, Igor Tamm, recruited him to work on the Soviet nuclear weapons program in 1948. Sakharov later said he felt he had no choice, but he threw himself into the research with gusto. He genuinely believed at the time that his work was vital to ensure a balance of power in the world. Ultimately he devised a novel design for a hydrogen bomb that he dubbed “layer cake” (sloyka in Russian), because it had alternating layers of fission and fusion fuel. At the same time, he and Tamm came up with an ingenious design for a thermonuclear fusion reactor, the tokamak; it remains a top candidate for fusion energy.

The Soviets detonated their first H-bomb in August 1953. This achievement made him a national hero, but witnessing the devastation launched him on the road to political activism as he began grappling with the moral implications of this work. “When you see the burned birds who are withering on the scorched steppe, when you see how the shock wave blows away buildings like houses of cards, when you feel the reek of splintered bricks, when you sense melted glass … all of this triggers an irrational yet very strong emotional impact,” he later wrote.

Two years later, in an article about the biological risks of low-level radiation, he estimated that testing a one-megaton bomb could lead to 10,000 human casualties from cancer, and he called for a ban on further nuclear tests. A temporary ban was put in place, but Nikita Khrushchev lifted it in 1961 to test the so-called Tsar bomb (with a 50 megaton yield). The following year, Sakharov again failed to prevent a nuclear test — something he termed “the most terrible lesson of my life: you can’t sit on two chairs.” Disillusioned, he returned to academic research, where he worked on the problem of baryon asymmetry in the early universe, among other topics. But he became increasingly outspoken and politically active.

Matters came to a head in 1968, when Sakharov penned an essay critiquing the Soviet regime and calling for a “democratic, pluralistic society.” He circulated the essay among friends and colleagues in the form of a typewritten pamphlet known as “samizdat.” Eventually someone smuggled the text out of the country, and the New York Times published it in 1968.

Sakharov was fired from the weapons program and lost his privileged position at the top of the Soviet hierarchy. Yet he continued to fight for human rights. He was the target of multiple newspaper campaigns denouncing him, but his international stature grew. He won the 1975 Nobel Peace Prize for “his fearless personal commitment in upholding the fundamental principles for peace.” Sakharov was not allowed to travel to Oslo to receive his prize, however; his wife, Yelena Bonner, accepted on his behalf.

The Soviet government decided it had had enough when Sakharov protested the military invasion of Afghanistan in 1979. He was arrested and exiled to Gorki in January 1980, and summarily stripped of his many honors. His wife joined him in exile four years later. Isolated from friends and family, and persecuted by the KGB, Sakharov went on two hunger strikes on her behalf, so that she could travel to the U.S. for heart surgery. (She was granted permission in 1985.)

In 1986, Mikhail Gorbachev came to power, ushering in the era of glasnost and a series of reforms known as Perestroika (reconstruction). He invited Sakarahov to return home to Moscow, and the physicist was elected to the new parliament, co-leading the democratic opposition. He was also appointed to the commission charged with drafting a new Constitution.

On December 14, 1989, Sakharov went to take a nap in his study to prepare for a speech the next day in Congress. His wife found him dead in his study two hours later — he had suffered a fatal heart attack. Among the many remembrances in his honor is the APS Sakharov Prize, awarded every other year since 2006 “to recognize outstanding leadership and/or achievements of scientists in upholding human rights.”