A Historic Step Towards a Future African Light Source

By Sekazi Mtingwa and Ernie Malamud 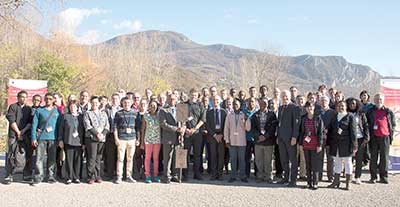 Organizers of the African Light Source Conference and Workshop, November 16-20, 2015, in Grenoble, France.

At a conference and workshop held in November 2015 at the European Synchrotron Radiation Facility (ESRF), in Grenoble, France, the participants agreed that the construction of an African light source (AfLS) facility must begin somewhere in Africa in the near future.

The earliest call for an African governmental collaboration to construct a light source (LS) can be traced to the 2002 Strategy and Business Plan that defined the programs and goals of the African Laser Centre (ALC), which is a network of approximately thirty laser research and training laboratories throughout Africa. The organizers launched the ALC in 2003 as a nonprofit organization based in Pretoria, South Africa. From its genesis, the ALC has maintained an AfLS as one of its long-term goals.

In 2011, South Africa’s Synchrotron Research Roadmap Implementation Committee and the South African Institute of Physics convened a workshop in Pretoria that produced a strategic plan for enhancing that country’s synchrotron light source user community, which, numbering about forty, is by far the largest user community in Africa. One of the major recommendations was for South Africa to become a dues-paying member of the ESRF, which it did in May 2013.

More recently, a group of interested scientists, led by Simon Connell of the University of Johannesburg, called for nominations for an interim steering committee for the African Light Source (ISC-AfLS). They held elections and announced the results at an August 2014 Forum Day, which was part of the African School on Fundamental Physics and its Applications, hosted by the University of Cheikh Anta Diop in Dakar, Senegal.

It was a subgroup of the ISC-AfLS that organized the First African Light Source Conference and Workshop at the ESRF in November. They decided to convene the meeting there instead of at an African venue so that governmental officials not familiar with light sources could tour a world-leading facility. The first two days of the meeting consisted of invited talks by African users of light sources and by non-African users who study major challenges for Africa, such as malaria and HIV/AIDS. During the final three days, participants discussed policy and strategy, resulting in the following: a set of resolutions, dubbed the Grenoble Resolutions, that state the need for an AfLS; a roadmap consisting of short-, medium-, and long-term goals; and the election of a fully mandated steering committee to drive the roadmap forward, with Connell serving as the interim chair.

Advanced LSs are major transformative scientific instruments in a way similar to traditional lasers and computers. They embrace essentially all spectroscopy, scattering, and imaging techniques, utilizing radiation from the infrared, visible, ultraviolet, X-ray, and even the soft-gamma-ray portion of the electromagnetic spectrum. They are orders of magnitude brighter than traditional lasers, which for decades have transformed science and technology. Synchrotron light sources and free electron lasers address many challenging questions in life and condensed-matter sciences.

LSs are not used solely by academic researchers, as an increasing number of industrial entities purchase beam time at many such facilities. The extremely high photon brightness and flux provided by LSs have allowed significant advances to be made in numerous applications for the benefit of society, including such biological and medical applications as drug development and better understanding of diseases, based upon the deciphering of protein, bacterial and viral structures.

Researchers work in close proximity, since as many as 50 or more beamlines at synchrotron facilities can operate simultaneously, with some beamlines supporting more than one experiment. Though costly, LSs have become clear leaders for research outputs, graduate student training, and drivers of technological innovation. Thus, they benefit nations far more than they cost.

There are many LS facilities in operation in the world. Africa is the only habitable continent without one. LS supporters argue that if African countries want to take control of their destinies, be competitive socially, politically, and economically, and become major players in the international scientific community in the years to come, access to a nearby light source will be an absolute necessity.

The AfLS is expected to contribute significantly to an African science renaissance, the return of the African science diaspora, the enhancement of university education, the training of a new generation of young researchers, the growth of competitive African industries, and the advancement of research that addresses issues, challenges and concerns relevant to Africa.

Once AfLS conference and workshop participants had agreed that construction of a light source must begin somewhere in Africa in the near future, they adopted a roadmap that describes concrete steps to realize that vision. In the short-term (up to three years), the main emphasis is on building awareness of the benefits of light-source-based research, especially among government officials; training new users, especially students; developing international collaborations; promoting access to current light sources; developing local infrastructure to support access to light sources; and launching the pre-conceptual design report for candidate sites. For the medium-term (up to five years), the steering committee will evolve into the AfLS task team that will produce the detailed governance model and business plan that includes costs for an AfLS. Finally, in the long-term (beyond five years), the task team will complete the technical design report for the selected site, and the construction of an African fourth generation light source with requisite infrastructure will commence.

Most light sources are single-country-owned; however, some are owned and operated by a consortium of countries, such as the ESRF, which is a collaboration of eighteen European governments, plus South Africa and Israel, and has been in operation since 1992. Another example of a light source collaboration is the Synchrotron-light for Experimental Science and Applications in the Middle East (SESAME), which is under construction in Allan, Jordan as a collaboration of nine Middle East governments that include Bahrain, Cyprus, Egypt, Iran, Israel, Jordan, Pakistan, Palestinian Authority, and Turkey. Scheduled to start research in 2016, SESAME is patterned closely after the model adopted by CERN, wherein UNESCO serves as the umbrella organization. We will see whether the AfLS collaboration will adopt a similar model. Stay tuned.

Sekazi Mtingwa is Principal Partner, Triangle Science, Education & Economic Development, LLC. He is a founding board member of the African Laser Centre. Ernie Malamud is Scientist Emeritus, Fermi National Accelerator Laboratory, and Adjunct Professor of Physics, University of Nevada, Reno. Both are members of the steering committee for the African Light Source.