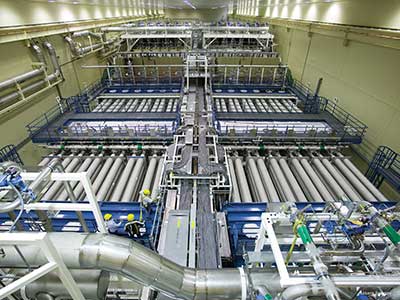 The relationship between the Department of Energy (DOE) and its national labs is “broken,” the co-chair of the Commission to Review the Effectiveness of the National Energy Laboratories, T.J. Glauthier, told members of Congress in two hearings this fall.

The Commission released a report in October, which emphasizes that the country’s 17 national labs are an important and valuable asset. But, “The national lab system is not realizing its full potential,” said Glauthier — an energy consultant who served as the deputy secretary of DOE during the Clinton administration — at a hearing of the Senate Appropriations Subcommittee on Energy and Water Development in October.

The report includes 36 recommendations to improve the effectiveness of the labs — from mending the DOE-laboratory relationship, to boosting technology transfer, to making it easier for laboratory researchers to attend conferences.

DOE owns the national laboratories, and nearly all are run by their own management teams; this government-owned, contractor-operated model applies to 16 of the 17 labs. (The lone exception is the National Energy Technology Laboratory, which is government operated.) The government sets program priorities, and the contractors must plan accordingly.

But, the report states, “The National Laboratories, for their part, do not fully trust DOE and therefore maintain secrecy about some of their actions. ... DOE, for its part, does not trust the laboratories to keep them fully informed about technical and financial progress or safety and security issues. As a result, DOE micromanages work at the laboratories with excessive milestones and budget limitations.”

Instead, said Glauthier, “the labs should have more flexibility than they do now to implement [DOE’s] programs without needing as many approvals from DOE along the way. In return, of course, the labs must operate with transparency and be fully accountable for their actions and results.”

Senator Dianne Feinstein (D-CA), who originally pushed for the creation of the commission, expressed concerns about the commission’s proposal to lengthen DOE’s short leash, citing previous instances of ballooning project budgets and construction delays. “I think what’s lacking is any kind of ongoing communication with us,” Feinstein added, expressing interest in arranging regular meetings with laboratory directors.

Commission co-chair Jared Cohon, an engineer and president emeritus at Carnegie Mellon University, responded, “What we’re reacting to is an overall tendency where the relationship between DOE and the labs becomes compliance focused.” This leads to a box-checking mentality, Cohon said, rather than an environment where people think critically about what DOE and the labs are trying to accomplish. “When there are too many requirements,” Glauthier added later in the hearing, “people get relaxed and they think, ‘Well, if I met all those requirements it’s all going to be okay.’”

The labs vary in their relationships with DOE — and those with the healthiest partnerships tend to fall under DOE’s Office of Science, the commission says. Ten of the country’s labs are Office of Science labs, three nuclear weapons labs are under the purview of the National Nuclear Security Administration (NNSA), and the rest fall under other DOE program offices.

“We’re pretty well aligned and have a good relationship with the Office of Science, so I personally don’t feel like there’s a trust problem,” Oak Ridge National Laboratory Director Thom Mason told APS News, noting that the situation is “probably more problematic within the NNSA.” In general, Mason said that the recommendations were helpful. “Even though I wouldn’t say we’ve got a fundamentally broken relationship, I think it is true that all of the labs could benefit from some thought about how we could be more cost-effective and efficient in what we’re doing.”

Mandated by the Appropriations Act of 2014, the commission, made up of nine commissioners, studied the labs over 18 months, visiting each laboratory and hearing testimony from 85 witnesses. Senator Feinstein initiated the effort, as the then-chair of the Energy and Water Development Subcommittee.

Such assessments of the national labs are by no means a new phenomenon. “Particularly in recent years, it’s been kind of a cottage industry,” said Mason. At least 50 reports have been written over the last four decades.

The commission reviewed the earlier recommendations, and found that the problems have been remarkably consistent over the years. To prevent their report from gathering dust, the commission recommends that a standing advisory body be created that would provide ongoing guidance for Congress, DOE, and the laboratories.

At a hearing of the House Science Committee’s Subcommittee on Energy in November, Peter Littlewood, director of Argonne National Laboratory, endorsed the major recommendations of the report, and said that he has found other lab directors to be supportive as well. In particular, Littlewood highlighted the importance of acceptable risk-taking in producing successful, competitive research. “I’m concerned that we actually have too many programs which can neither succeed nor can they fail, and therefore they tend to stagnate,” Littlewood said. “Sometimes, actually, we must risk success.”

Representative Bill Foster (D-IL) agreed. Often, when something goes wrong, there’s an overreaction, said Foster, a physicist who worked at Fermilab for 23 years before running for office. “And this gets amplified down the command chain at every step. ... As a result, by the time this gets down to the working level, sometimes these have morphed into really silly things.” (Although Foster is not a member of the Energy Subcommittee, he asked to sit in because of his experience with the subject.)

The commission also recommends raising the cap on Laboratory Directed Research and Development (LDRD) funding, which supports discretionary research at the labs. The report suggests returning this cap to the level it was at before 2006 — six percent of the lab’s budget. LDRD is particularly important for the NNSA labs, which use the money to recruit and train scientists, the commission says.

“Investment in LDRD has enabled virtually every major Argonne initiative,” Littlewood said — from the Advanced Photon Source to supercomputing at the lab. “LDRD is peer reviewed and extraordinarily competitive.”

The commission also calls for streamlining the process for laboratory employees traveling to scientific meetings. “At every laboratory, in our meetings with especially younger scientists, this issue came up, and came up as number one. It’s a very serious constraint on their ability to be effective,” Cohon said. “Being effective when you’re involved in research means interacting with people who are at the frontiers of your area of science, and if you can’t go to conferences ... you really are deprived.” DOE is already implementing some changes to try to improve this situation, Glauthier added.

Senator Lamar Alexander (R-TN), chair of the Energy and Water Development Subcommittee, said he agrees with many of the recommendations of the report. “If we can ensure the labs are running as effectively as possible, then more money can be spent on research and development and the national labs can work more easily with private industries to support our 21st-century economy and create jobs.” Alexander highlighted two additional recommendations of the report: using innovative financing approaches to fund projects, and enhancing technology transfer between the labs and industry.

The commission’s recommendations, Glauthier said, are almost all within the power of DOE to implement without additional legislation from Congress. “A lot of it depends upon the culture between the department and the labs, and that culture change is not something that can be legislated or can be changed overnight, and it requires work on both sides.”

The report is available on the Department of Energy website.