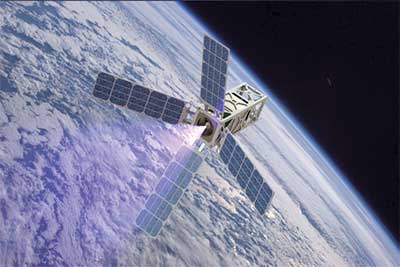 Photo: Plasmadynamics and Electric Propulsion Lab at the University of Michigan

Small satellites called CubeSats can be steered and propelled by tiny ion and plasma thrusters.

The popularity of small satellites is skyrocketing; weighing a few kilograms or less, such spacecraft are an attractive way to launch instruments on a budget. But they have a problem — propulsion. Without it, the craft are unable to steer or move to different orbits. Traditional chemical thrusters are too large to cram onto a tiny, one-kilogram satellite, but scientists are now working on other types of thrusters that can be miniaturized. The thrusters would boost small satellites to higher orbits, let them fly in formation, or de-orbit them when their missions are complete.

Small satellites, like CubeSats — standardized cubes only 10 centimeters on a side — are easy to produce in large numbers and economical to launch, as they can piggyback on larger missions. But when the tiny spacecraft first came on the scene, people thought of them as toys — and they were right, said Paulo Lozano of the Massachusetts Institute of Technology (MIT). “You would launch one of these things into space; they would tumble along for a few orbits; they would work for perhaps one week … and then they would just burn up in the atmosphere.”

One possible solution is ion thrusters. These typically work by applying an electric field to ions, expelling them out of the craft and thereby propelling it in the opposite direction. They have already been used successfully, including in NASA’s Dawn spacecraft, currently in orbit around the dwarf planet Ceres. Such thrusters can operate more efficiently than chemical thrusters because the ions are expelled at higher speeds than chemical thrusters can achieve. But they too have proved challenging to miniaturize.

There are several thorny obstacles to miniaturizing ion thrusters. One is a buildup of electric charge on the satellite, which draws the emitted ions back in after they are expelled, negating the thrust. To avoid this, ion thrusters typically include a cathode that emits electrons — but the cathode takes up precious room on the spacecraft and is difficult to scale down. Additionally, such thrusters commonly ionize a gas, like xenon, to create plasma — the source of the ions. Unfortunately, such gases are difficult to store and take up more space than a solid or liquid propellant.

Therefore, said Ane Aanesland of Ecole Polytechnique in France, “You look at a system where you don’t need these things.” She and her team have developed a thruster that skirts these issues, which she presented this October at the 2015 APS Gaseous Electronics Conference in Honolulu. Aanesland’s thruster uses a solid iodine propellant instead of gaseous xenon. And rather than accelerating ions with a constant voltage applied across a grid, it uses an alternating radio frequency voltage that enables it to emit both electrons and ions. She expects to be able to shrink her system to power a satellite as small as six kilograms. They aim to have an operating prototype in the next two years, she said.

Lozano’s group employs a different style of ion propulsion, using liquid salts as the source of ions, he explained at a meeting of science writers at MIT in October. By applying an electric field to pull ions out of the fluid (a process known as field evaporation) and flinging them away at high speeds, the thruster creates a force in the opposite direction.

To enable the electric field to pull ions out of the fluid, Lozano’s team fashioned an array of sharp, tiny points (each with a tip diameter of 10 thousandths of a millimeter) made of porous glass or nickel, covered with the ionic fluid, which enhances the electric field around the tip. In August, a laboratory test of the system, performed under vacuum to mimic the conditions in space, successfully rotated a magnetically levitated CubeSat.

If used for propulsion, the force generated by an array of eight such thrusters could take a satellite from an orbit at an altitude of 400 kilometers up to 800 kilometers, Lozano said, and this performance could be improved by packing more tips into each thruster. To avoid charge buildup on the satellite, the polarity can be switched at intervals to emit ions of the opposite charge.

Another satellite propulsion option presented at the Gaseous Electronics Conference, the CubeSat Ambipolar Thruster, is under development at the University of Michigan (U-M). The thruster generates plasma using radio-frequency power coupled to an inert gas, designed to generate a wave known as a “helicon” that is very effective at ionizing the gas. Permanent magnets create a magnetic nozzle that directs the plasma out of the ionization region and away from the spacecraft. The team was able to miniaturize this system into “a really small package” that can fit into a CubeSat, said Timothy Collard, a graduate student at U-M.

Their system is also adjustable for different types of flight. High powered, energy-intensive flight can be alternated with lower power, fuel-efficient flight, said Collard. And it can use solid or liquid propellants, from iodine to water, “allowing you to pack more punch into a smaller system,” Collard said.

Although small satellites were first developed for students, they quickly caught on. Hundreds of small satellites were launched as start-up companies began using them to take images of Earth. This was especially so after NASA started a launch program to help scientists and students get their cubes off the ground and perform serious research.

The craft also provide a viable option for countries without a space program: “We are trying to give space access to people that currently don’t have space access,” Lozano said. The ease of creating a fleet of small satellites means they could be useful tools for communications, navigation, or climate studies, Lozano said.

And scientists are setting their sights higher still. “You can theoretically do missions ranging from Earth observation and weather monitoring in Earth orbit, all the way up to sending them out to provide basic measurements of other bodies in the solar system,” said Collard. “You can actually escape Earth.”