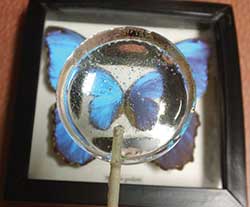 Lollipop lenses are delicious and amusing but also offer a way to teach optics.

Optics research and applications of all types were on display and under discussion at this year’s Frontiers in Optics / Laser Science (FiO/LS) a joint meeting of the Optical Society and the APS Division of Laser Science, held in San Jose, California.

At first glance, 3D printing seems unsuitable for creating optics components, which must have incredibly smooth surfaces that are not achievable with standard 3D printers. “Fortunately there are always crazy enough people,” said Jyrki Saarinen, of the University of Eastern Finland. Saarinen discussed a process, developed by the company Luxexcel, to 3D print custom optics components in a variety of shapes. The technique uses UV-curable materials, printed with liquid drops that harden when exposed to ultraviolet light. The drops merge together as they are printed, smoothing out the rough edges.

Ever wish you could eat your optics? Two University of Arizona students did, and they created a start-up company, Edible Optics, to make those dreams come true. Their wares are candy lollipops, made in the shape of various types of lenses. Instead of glass or plastic, these lenses are made out of sugar. Their products, which were on display at FiO/LS, are designed for use in hands-on science education. The founders of Edible Optics hope to provide schools with an affordable and fun (and tasty) way of teaching optics to kids.

Keeping an eye on insects

Optics applications were everywhere at FiO/LS. One of the most unusual was an insect-monitoring system that can detect and study wild insects in flight. The system, presented by Alem Gebru, a graduate student at Stellenbosch University in South Africa, can work using two different methods: either with a telescope viewing a dark cavity and watching for flashes caused by insects reflecting sunlight, or with a light-detecting-and-ranging (LIDAR) system using a laser and viewing the backscatter the insects produce. The sampling rate is more than two thousand times a second, so the system can observe the insects’ wings beating, and by comparing shortwave infrared and near infrared scattered light, determine if the insect is a dark or light color, providing a handle for identifying the species. Examining how the signals evolve in time can provide a sense of what direction the insects are traveling. Gebru hopes the system will help farmers monitor their fields. “They want to know what kind of pollinators or pests are in their environment,” he says.

Green laser pointers are ubiquitous at scientific meetings, but at FiO/LS, attendees got schooled about how they work. While brandishing such a pointer during a plenary talk, Elsa Garmire of Dartmouth College said, “This is not a green laser pointer.” Garmire’s talk gave an overview of nonlinear optics (a field she helped pioneer), which deals with the behavior of light in nonlinear media (for example, the generation of harmonic frequencies of light). The green laser pointer, she explained, is an example of nonlinear optics at work. To produce the bright green beam, infrared laser light is doubled in frequency by a nonlinear crystal. “From now on, every time you use this, call it a nonlinear pointer,” Garmire proclaimed.