Once More, Into the Breach

By Daniel Kleppner and Richard A. Meserve 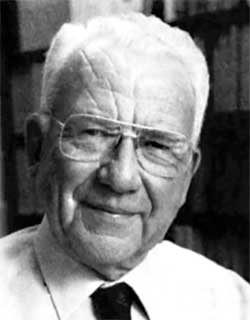 In 1986 and 1988 Henry (Heinz) Barschall, a respected nuclear physicist at the University of Wisconsin, editor of Physical Review C and what was then the APS Publications Oversight Committee, wrote articles in Physics Today that presented the results of a study of the cost of library subscriptions to physics journals. The consequences of Barschall’s studies provide a cautionary tale on what can go wrong when scientific and commercial interests collide.

Barschall found the cost of physics journals published by the American Institute of Physics (AIP) and APS was low, while the highest cost was for the publisher Gordon & Breach (G&B). The difference in cost among various publishers spanned a factor of about 40. Barschall’s articles evidently infuriated Martin Gordon, head of the firm, because in 1989 he launched a series of lawsuits against APS, Barschall, and AIP (the publisher of Physics Today). The litigation went on for ten years. In 1991 one of the authors (DK), wrote an article for Physics Today calling attention to the bizarre situation. AIP, however, declined publication arguing, quite reasonably, that the essay would certainly precipitate yet another lawsuit by G&B.

The defense was led by Richard A. Meserve, a partner at Covington & Burling LLP and a Fellow of the APS. The defense involved litigation in four jurisdictions and in three different languages. Meserve was ably assisted by the multilingual capacities of Barschall, Harry Lustig (then treasurer of APS), and Marc Brodsky (then executive director of AIP). Barschall died in 1997, Gordon & Breach went out of business in 2001 and was acquired by another publisher, and Gordon died in 2015. At last it is safe to make the history public without fear of retaliation. What follows is the 1991 essay by Kleppner and a postscript by Meserve.

The heroes I admire most are those heroes whose modesty matches their courage — Clark Kent and the Scarlet Pimpernel, for instance. They ask for no reward but the satisfaction that comes only from brave deeds done anonymously. But when I jeopardize my safety for the public good, I want the world to know. So here it is. Steely eyed and level headed, my veins throbbing with sangfroid, I do now express the opinion that SOME GORDON & BREACH PUBLICATIONS MIGHT BE CONSIDERED A LITTLE BIT PRICEY.

If this act of recklessness fails to leave you breathless, let me assure you that to criticize G&B is to risk the wrath of a deeply litigious corporation. In this nation of ours, where litigation has become a blood sport, taunting such an adversary is not for the faint of heart. Henry Barschall learned this the hard way, and so have others who suddenly found themselves flat on their backs, staring up at G&B’s blockhammer of litigation.

In 1986 Physics Today published the results of a survey by Henry Barschall on the cost of library journals. Barschall ranked journals according to the average cost per word and also calculated the ratio of cost to frequency of the journal citations. Some journals came out cheap, some journals came out expensive, and some journals, mostly G&B journals, came out very very expensive. This was too much for G&B. It did the only thing that a red-blooded corporation could do: G&B sued. So what, you may be wondering, happened?  To make a long story short: That, you might think, would be the end of it. Hah! Don’t underestimate the will of a corporation whose honor is at stake.

Where will this end? Possibly it will go on until Barschall, AIP, APS and G&B are all bankrupt. Meanwhile, life is no bowl of cherries for Heinz Barschall, who cannot munch a weisswurst in Marienplatz without looking for a rechtsanwalt over his shoulder, nor sip a cafe filtre by the Seine without worrying about the flics descending on him to serve a procès, nor return home without worrying whether his car, his house and perhaps even his family have been attached as a down payment on costs — life is grim. And for the folks at AIP and APS who have to rush to Europe at the drop of a hat, and whose files are now meters long, the wasted time is mounting up.

Barschall is not the only victim of G&B’s litigation mania. When Octave Levenspiel of Oregon State University complained of G&B’s prices in Chemical Engineering Education, he got an ominous letter from the G&B attorneys. And when Joel Rutstein of Colorado State University complained of a rise in G&B’s subscription prices in a letter to Early Child Development and Care, he also received an ominous letter (more precisely, he described it as a “nasty’’ letter). G&B also read its riot act to the American Mathematical Association. And at this point I can no longer hide the observation that James Thompson of the University of Riverside reputedly was threatened by a suit from G&B if he failed to retract his observation that G&B was threatening to sue people.

There is also the Mystery of the Foundation for International Scientific Cooperation and whether it did or did not sponsor the survey carried out by G&B under the Foundation’s letterhead, which asked for all sorts of information, including whether by any chance any librarian has been induced to drop any subscriptions because of Barschall’s survey. The Foundation appeared to be on the up and up except that the return address for the questionnaire was a Washington law firm, and the postal meter belonged to G&B.

So why do I thrust myself into the breach of danger to tell you these things? Perhaps because the thought of a greedy corporation in a frenzy of litigious madness monkeying with our freedom of speech makes my blood boil, or the thought of some journal costs make my blood run cold, or perhaps it’s just, as John Wayne would put it, “A guy’s gotta do what a guy’s gotta do.”

The author would thank his friends and the magazines and journals who provided the facts for this case, but that would be to put them in needless danger.

Some stories have a happy ending and fortunately this one does. G&B ultimately filed suit in Germany, Switzerland, France and the United States claiming that Barschall’s work constituted unfair and illegal comparative advertising. G&B ultimately lost everywhere, although not without pursuing appeals. So Barschall, the APS, and AIP achieved a complete victory.

The litigation in the United States involved a seven-day trial in a federal court in New York City. Judge Sand wrote an extensive opinion outlining the facts of the case and his legal analysis. He ultimately concluded:

“Barschall’s methodology has been demonstrated to establish reliably precisely the proposition for which defendants cited it — that defendants’ physics journals, as measured by cost per character and cost per character divided by impact factor, are substantially more cost-effective than those published by plaintiffs. Plaintiffs have proved only the unremarkable proposition that a librarian would be ill-advised to rely on Barschall’s study to the exclusion of all other considerations in making purchasing decisions. This consideration in no way makes Barschall’s study or defendants’ descriptions thereof false, and accordingly judgment is granted to defendants.”

The opinion also includes an extensive discussion of G&B’s efforts to intimidate its critics. The judge commented that “defendants introduced extensive evidence that G&B has engaged in an aggressive corporate practice of challenging any adverse commentary upon its journals, primarily through threatened (and actual) litigation. This evidence persuasively demonstrated that the present suit is but one battle in a ‘global campaign by G&B to suppress all adverse comment upon its journals.’” One might appropriately wonder why the judge commented on the unclean hands of G&B, particularly given his decision that the Barschall work was beyond reproach. I conclude that the judge wanted to put G&B’s tactics on the record so as to undercut any further efforts to intimidate others.

References to the Barschall articles
H. Barschall, Physics Today, Dec. 1986, p. 34 and Physics Today, July 1988, p.56. The underlying data were published in the Bulletin of the American Physical Society, July 1988, Vol. 33, p. 1437. Links to the articles and other materials relating to the dispute are found at http://www.library.yale.edu/barschall/index.html