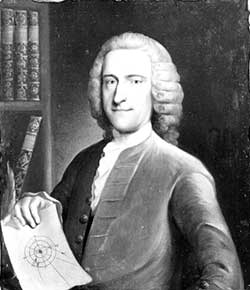 History is filled with doomsday prophets predicting the end of the world. One of the more colorful was an 18th-century natural philosopher named William Whiston, who tried to blend science with his decidedly unorthodox and apocalyptic religious views.

Whitson was born in 1667 — one year after Isaac Newton published his landmark treatise, Principia. He was the son of a Presbyterian minister named Josiah Whiston, who lived in the town of Norton, England. Educated at home for much of his youth, the boy also helped out by copying manuscripts for his blind father. When Josiah died, young William inherited his library and entered Clare College at Cambridge University with the goal of becoming a minister like his father. He also studied mathematics, as well as the Principia. After earning his degrees and being ordained, he initially stayed at Clare College as a math tutor, but ill health forced him to resign that position. In 1694 he moved to Norwich to serve as chaplain to the bishop of that town.

It was during his tenure at Norwich that Whiston penned the treatise A New Theory of Earth, applying Newtonian physics to a literal interpretation of scripture. He believed science could be cited in support of certain stories in the Bible. For instance, he concluded that it was Adam and Eve’s exile from the Garden of Eden (original sin) that set Earth in rotation, and he linked natural disasters on Earth — most notably, the account of Noah’s flood — with astronomical events. In the case of the flood, Whiston fingered a comet as the cause, claiming that comets were also responsible for the formation of the solar system.

Comets were of great scientific interest at the time. The astronomer Edmund Halley had already noted the periodic appearances of comets in the sky, successfully predicting the return in 1759 of the one that now bears his name, although he did not live to see it. Whiston devised an elaborate mathematical proof — accompanied by biblical quotations — to show that a comet passing Earth on November 28, 2349 BC caused rain for 40 days and 40 nights, flooding the planet “to show God’s displeasure with the wicked world.” These ideas were controversial, but he had allies, among them the philosopher John Locke.

Two years after the publication of A New Theory of Earth, Whiston became vicar of a small parish in Suffolk, marrying the daughter of his former childhood headmaster the following year. His father-in-law gave them a farm as a source of income, and in 1701 Whiston briefly became Newton’s assistant at Cambridge, but theological differences soon came between them, and they had a bitter falling out. Yet when Newton retired the following year to focus on being president of the Royal Society, Whiston succeeded him in taking the university’s Lucasian Chair of Mathematics, although he was never elected to the Society. It is possible that Newton blocked his election. Whiston himself blamed his growing reputation as a “heretick.”

Indeed, his unorthodox religious views soon led to his academic downfall. All faculty were required to follow Anglican doctrine. Whiston rejected the Trinity, among other other orthodox beliefs. Although Newton held a few speculative opinions of his own, he kept them private. Whiston was less discreet about broadcasting his opinions and even published a collection of sermons and essays outlining his position in detail.

His Cambridge colleagues were not pleased. When he refused to recant, he was charged with heresy before the heads of all the Cambridge colleges. He lost the Lucasian chair in October 1710 and in addition was dismissed from the university. He even briefly faced the prospect of a trial in London for heresy, but gained a reprieve with the timely demise of Queen Anne.

Left with just the small income from his farm to support his family, Whiston turned to science outreach, lecturing in various coffee houses around London and conducting demonstrations for the public. He also joined forces with a young man named Francis Hauksbee to teach a course on mechanics, optics, hydrostatics, and pneumatics. Eventually their work led to a manual used by lecturers at Oxford University.

He may have lost his Cambridge chair, but in 1714, when Parliament was considering how to encourage its intellectual leaders to tackle the navigational problem of determining longitude at sea, Whiston still had some scientific credibility left. He suggested a financial reward as motivation, and Parliament passed the Longitude Act later that year.

Whiston’s motives weren’t entirely altruistic: He threw himself into devising his own methods for determining marine longitude, most of which earned the ridicule of his peers. Among his more creative, if impractical, suggestions: firing a shell at a fixed time each day from stations at fixed points all along the Atlantic Ocean. After the flash of the shot, ship captains could then time how long the sound took to reach them, and then calculate their distance.

Over time, Whiston’s religious views became even more unorthodox, and his scientific reputation suffered irrevocable damage. He longed for an earlier, presumably purer form of Christianity. In 1715 he founded his own Society for the Promoting of Primitive Christianity, hosting meetings in his home — essentially becoming an 18th century evangelical fundamentalist. He would eventually leave the Anglican Church and become a Baptist. He still believed in the periodicity of comets, and that a comet had caused Noah’s flood. In 1736 he publicly proclaimed that the world would end on October 16 that year, when another comet would pass by Earth and trigger a massive fire. This sent London citizens into a panic. The Archbishop of Canterbury had to publicly denounce Whiston’s prophecy to dispel the hysteria.

The comet came and went, and the world was not destroyed by fire. Whiston was now a laughingstock, and he died a social pariah in 1752 after a short illness. Many comets have passed by Earth since then to no ill effect.