The Physics Bus: Coming to a Town Near You 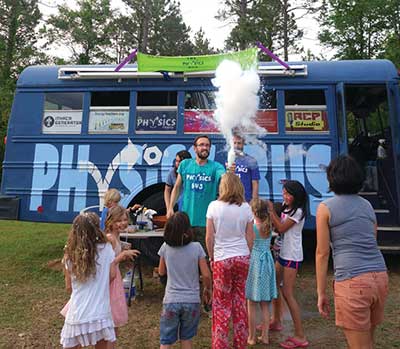 Demos are a big part of the Physics Bus program.

A bus full of physics experiments is cruising through the small towns of Florida this fall, thanks to the hard work of a few dedicated volunteers and the support of an APS Outreach Mini-grant. The grants, awarded earlier this year, funded eleven projects, with up to $10,000 each, to help small groups bring the wonder of physics to the public.

The first Physics Bus rolled out in 2004, in Tucson, Arizona, when Chris DiScenza and colleagues filled a bus with physics demonstrations and created a science center on wheels, which they took to schools, libraries, and museums across Arizona and as far away as Boston and Edmonton. The brightly colored vehicle runs on vegetable oil, making the bus itself a part of the science.

Over the years, the program spawned other physics buses, expanding to Ithaca and now Gainesville, where DiScenza had moved for a graduate program in coastal engineering at the University of Florida. The Physics Bus teams are all affiliated with The Physics Factory, a nonprofit organization based in Tucson.

The bus, says DiScenza, serves an important need in north central Florida, the region around Gainesville. “There’s a lot of really small towns throughout the area and there’s not really enough resources for all the kids in these small towns.” This spring, the bus debuted at a local festival, and DiScenza has also visited nearby schools and museums, with plans for more extensive tours in the coming months. A team of volunteers, including physics and engineering students at the University of Florida, has helped get the bus on the road.

Attractions on the bus range from the classic demonstration of a ping-pong ball suspended in the stream of air from a hair dryer, to a tabletop fog tornado, to an electric pencil sharpener that causes a magnet to dance around due to the magnetic fields generated by the motor. “You never would think a kid would get excited about a pencil sharpener,” DiScenza says. “The exhibits on the bus demonstrate that there’s physics in these everyday items that they never even realized.”

The group even has a bicycle that kids can pedal to run a blender. “It’s been a huge hit, especially since it’s really hot here — kids love making smoothies,” DiScenza says.

This is the sixth year that APS has offered Outreach Mini-grants. This year, a National Science Foundation grant has supported an expansion of the program, allowing twice the usual number of mini-grants to be funded.

“The mini-grants are important because they fill a funding gap,” says Rebecca Thompson, head of Public Outreach for APS. They provide funding for pilot projects that need more than a few hundred dollars to get started, but aren’t ready for a larger grant. “We can fund kind of crazy stuff and see if it works,” she says.