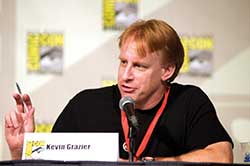 Planetary physicist Kevin Grazier hopes to motivate the next generation to go into science — and he’s doing it through science fiction. Grazier has worked as a science advisor for sci-fi movies such as Gravity and TV series such as Eureka, Defiance, and Battlestar Galactica, the recent re-imagining of the 1970s series. In this role, Grazier works with writers to bring authenticity to the science on the screen.

And Grazier certainly has the science chops for the job: He has a Ph.D. in geophysics and space physics from UCLA, and he worked at NASA’s Jet Propulsion Laboratory (JPL) for 15 years before leaving to focus on his work in the entertainment industry. Much of his research at JPL focused on the Cassini probe, which is currently in orbit around Saturn. APS News caught up with Grazier at Comic-Con International in San Diego, California, where he moderated a panel discussion about the science of sci-fi. What follows is an edited version of the interview.

How did you transition from science to the entertainment field?

It wasn’t really a transition because I’d been doing science advisory things for several years before I left JPL. While I was in graduate school, I was watching Star Trek Voyager with a friend of mine. Back then the Star Trek series would take unsolicited manuscripts. My friend and I wrote a script for Voyager, and pretty much forgot about it, because we were busy. So, seven months later, I get a call from the executive producer’s assistant saying they’d like to have us pitch stories. In doing that, I met two people whom I pitched to: Michael Taylor and Bryan Fuller. When Galactica came up I emailed Bryan. I said “Bryan, I grew up on Galactica, so please, please, please, please, please, get me an interview!” And so, he pitched me to [Galactica producer] Ron Moore, and because Bryan is well respected it was a five-minute interview, and I was hired. And then it was kind of word of mouth after that.

What are you working on now?

When I left JPL, a little over four and a half years ago, I had a whole stack of writing projects. Those range from journal articles to screenplays. I’ve still got new computational research going on. I’ve got a sci-fi pilot that I’m shopping, I’ve got a sitcom I’ve been shopping, I have a book, Hollyweird Science, about how science and scientists are portrayed in the entertainment industry. My coauthor and I are finishing Hollyweird Science 2, and we’re just about to sign a contract for the third book in the series.

What was your goal in writing Hollyweird Science?

A lot of scientists who write about the entertainment industry typically take it from a standpoint of “This is wrong, this is wrong, this is wrong,” and rarely is it “This is right, this is right.” My coauthor Stephen Cass and I said, “no one wants to read 300 pages of snark.” One of the things we want to do is help scientists understand that screenwriters are every bit as professional as you are, they’re just differently professional — they have different goals — and when you peek into their world, maybe you’ll get a little glimpse as to why the science isn’t always perfect, and why sometimes you don’t even want it to be perfect, necessarily.

Why would you ever want to get the science wrong?

On Breaking Bad, they purposely degraded the accuracy of the science because you really don’t want to teach people how to make methamphetamine in your dramatic TV series. So it’s a very complex, nuanced issue as far as that goes, and we want to capture that, we want to make people aware of how complex it is.

What do your scientist colleagues think about what you’re doing? Do you get positive feedback? Do some people say ‘why do you bother with that?’

Yes, all of the above. Scientists are going to come at it from different directions. Some people are very supportive of it. But there’s the traditional “If you’re doing this you can’t be serious about your science” and that’s not true either. We used to acknowledge that there’s something called a Renaissance person, right? I mean, that’s a goal to shoot for. The opportunity to work on these shows and work with these incredibly talented people is of course insanely fun, and it comes with a paycheck. But at the same time you’re trying to raise the level of science dialogue. When I worked at JPL, there were so many people who were motivated to go into science because of Star Trek.

Were you one of them?

Yeah. So I would love it if some time, years in the future, I was at a convention where someone says, “I was motivated to go into science by Eureka.”

Have people’s attitudes to sci-fi changed? Are we more interested in having accurate science than we used to be?

I think people are far too interested in having accurate science. It used to be that there was an implied bargain between screenwriter and the audience: “Go with me on these one or two really fantastic ideas, and we will be more grounded in the other areas.” But people have gotten to where they’re nitpicking even these fundamental conceits. I go back to how many people were motivated to go into the space program because of Star Trek. It’s riddled with things that are never ever going to happen.

How do you achieve the balance between accurate science and a good story?

It’s important to get the science as right as possible, but science is in service to the story. Now if you make an error you don’t have to make, I have a serious problem with that. But if it serves the story, if it’s part of your fundamental conceit, well, yeah, fine. If we’re requiring our stories to perfectly adhere to science, we lose the superheroes, we lose Star Wars, and we lose Godzilla. So there is a balance to be struck, and different films have different bars for that accuracy. I think we used to suspend our belief a little more and I think there’s a pendulum that’s swung a little too far to the other way. Today, the average person knows what the surface of Mars looks like better than the top scientists in 1963. Let’s keep things like that in mind.

What’s your favorite thing about your line of work? What drives you to do this?

It’s fun when your show gets accolades; it’s fun seeing your name scroll across the credits; but really it’s just the work — it’s fun creating; it’s fun when you’re posed with a challenge. It’s more like the work is rewarding than it is the final product. Though it is kind of cool seeing the show that you worked on and it being really good.