Women in Physics: Why so few?

By Theodore Hodapp and Zahra Hazari 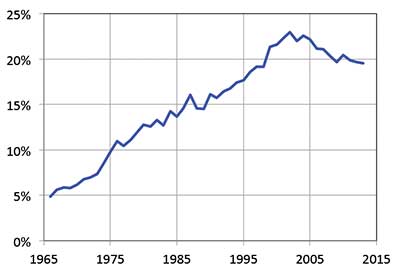 Figure 1. Percentage of bachelor's degrees in physics earned by women. Source: US Department of Education. 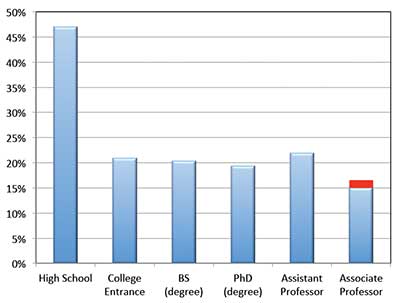 Where are the women? Despite decades of slowly increasing participation, women still receive only about 20% of the physics bachelor’s degrees in the U.S. (see Fig. 1). Even more alarming is that in the past decade, this percentage has gone down — all this at a time when physics itself is seeing record numbers of undergraduate and graduate degrees. Just to be clear, although the number of women getting bachelor’s degrees is actually going up, it just isn’t going up at the same rate as it is for men.

As part of our work, we hear anecdotally that the nation needs to increase the number of women getting Ph.D.s, and we encounter stories of women unable to get academic jobs or increasingly leaving these jobs. Aligned with these concerns is the ADVANCE program of the National Science Foundation (NSF) — an effort to improve gender imbalances in academia. Programs like this are important in the continuing effort to attract and retain women in academia, but we think they are not getting at a critical issue that keeps physics and engineering from breaking the 20% barrier. We ask: Are we focusing efforts where we can dramatically impact participation?

Where does the problem lie?

Let’s see what the data tell us. Figure 2 shows the percentage of women participating in physics at various stages, from high school to tenured associate professors in U.S. universities. In high school physics, unlike other levels, there is little gender disparity in science class enrollment. At the associate professor level, the data are consistent with the immediately preceding levels. Although this is not conclusive evidence, it suggests that women are advancing at similar rates to men in college and beyond (although absolute numbers decline substantially with each step).

While there are fewer women at the full professor level, proportionately speaking, the numbers are still consistent with previous levels since there were far fewer women getting Ph.D.s 20, 30, or 40 years ago — the time period over which one must integrate to evaluate full professor employment now. It is hard to say much about gender balance in private sector employment — there is little data covering this in physics.

Although there are studies showing gender differences occurring as early as elementary school, the last place where women participate in physics at equal numbers and, more importantly, the first time when they are seriously deciding about their future plans is high school. This is where we have the greatest ability to make a change in the demographic. If you want more evidence for this, see references [1] and [2]. High school is where we might have a chance to make a significant impact — while female students are still a captive audience in physics classrooms.

It has been argued that high school is too late — that female students are rounding out their academic credentials for college rather than taking physics because they are interested in the subject. While this may be true for some students, most female physicists report becoming interested in physics careers in high school and not earlier [2]. Furthermore, surveys of more than 900 female undergraduates [3] given to participants at the APS Conferences for Undergraduate Women in Physics showed that female students are attracted to physics careers during high school, at rates more than double those attracted during middle school or college.

In addition, there are other reasons why high school might be an optimal time period for attracting female students to physics careers. First, high school is the first time when physics is clearly delineated as a subject with a dedicated course and teachers who (usually) have a science background. Most elementary and middle school teachers have very little background in physics. High school may offer the first opportunity for students to explore physics at a deeper level with a teacher who can provide support.

Second, there is a large time lag between elementary/middle school and deciding on a college major or a career. If students are excited about physics at a younger age, there are still many years in which they can become discouraged about physics or attracted away by another discipline. Thus, the excitement must persist in high school.

Finally, what about attracting female students at the undergraduate level when students are even closer to a career decision and instructors have even more content expertise? Not only do the data show that women have already made choices, but reality is setting in for them regarding required courses, sequenced majors, and degree completion. Furthermore, attracting women from other STEM disciplines is either impractical (e.g., too late to switch for the 60% female bioscience majors who often reserve physics for their junior year) or detrimental (e.g., would leave other fields like engineering with a greater representation problem). Finally, fewer opportunities to interact with faculty in intro courses and social pressures make it difficult for undergraduate women to change their minds about physics.

So, what can be done at the high school level to effect change and attract women to physics? Evidence-based materials are currently being developed for attracting female students to physics in high school, and existing work [4] already shows promise with three basic strategies: Recognition, Relevance, and Discussion.

Recognition. Publicly (in the classroom), and privately (to the individual) recognize ability in female students to help them develop a physics “identity” and to encourage persistence. This could include explicitly remarking on good questions or comments from female students, directing other students to them for help, holding high expectations of their abilities, and encouraging them through challenges by expressing belief in their capabilities. A student who is called on or receives a compliment gains recognition that enables her to see herself as a member of the discipline.

Discussion. Through conversations with students, make issues related to women’s under-representation explicit — issues hidden for many students. This could include class discussions that reveal equity issues such as implicit bias, social pressures to conform to certain gender roles, values that appear missing from the physics discipline such as helping others, or applying stereotyped labels to professions. Students often mistakenly believe that equity has been achieved and are not conscious of these issues. Revealing a need can mobilize students.

So, how do we implement these techniques where they are needed and change the landscape of physics? There are about 27,000 high school teachers of physics in the U.S. Getting each of them to encourage only one more female student each year would profoundly impact physics and engineering. The challenge is how to get that message out, and get it implemented.

This is where the NSF comes back into the picture. Current funding by the Foundation does not emphasize high school to address gender imbalances. Their signature program in gender diversity is ADVANCE, and while these efforts are important, this is not where funding can significantly impact representation for physics and engineering. We recommend an effort within the agency of at least this scope and magnitude aimed at (a) funding research to engage high school physics teachers in this issue, and (b) pilot implementation and assessment of interventions in high school physics classrooms. Moreover, these efforts must reach all schools, including rural and inner-city schools, where our most economically disadvantaged students struggle.

What can we do as physics professionals? We must continue discussions and conversations of underrepresentation. Help colleagues (and yourself) become familiar with issues like stereotype threat, implicit bias, and imposter syndrome [5]. Where appropriate, practice the strategies mentioned above with women you interact with to encourage them to consider seeing themselves as physics professionals. If you are a faculty member, find out what your department and institution is doing to recruit, educate, and support high school physics teachers — these individuals interact with hundreds of potential physics majors. We recommend checking out the PhysTEC website for information on promoting physics teacher education.

And don’t stop doing what you are doing now to promote an inclusive environment for everyone to study and practice physics. These include transparent rules, gender representation in the organization’s leadership, attention to family-friendly policies, and paying attention to individual’s needs at all levels, be they student or scientist. These practices are critical for retaining the small numbers of women we have in our community and propagating a cultural message of inclusivity to the public. Physics may be about conservation laws and equations of motion, but it goes nowhere without physicists. To excel as a discipline, we must excel as a community. Solving this long-standing representation gap is critical to doing better physics.

5. See, for example: Dovidio, J. F., “The SAGE handbook of prejudice, stereotyping and discrimination” Sage Publications (2010); or Steele, C., “Whistling Vivaldi: How stereotypes affect us and what we can do,” W.W. Norton (2011).