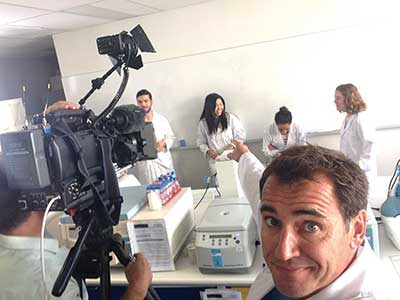 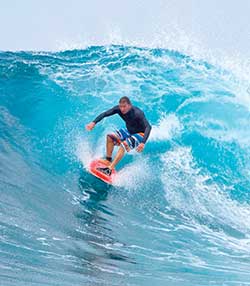 The physics of human-fluid interactions

Who is Ruben Meerman? He wears so many hats it is sometimes hard to tell. He’s a writer. He’s a science outreach specialist. He’s an entrepreneur. He’s a physicist. He is also a surfer, and 20 years ago started calling himself “the Surfing Scientist.”

Driven by a love of nature and the need to inspire others to pursue careers in science, technology, engineering, and mathematics, Meerman launched his own science communications and outreach business. He crisscrosses his native Australia presenting science to kids from high school to preschool. Over the last 20 years, he has visited approximately 1300 schools; in 2014 alone, he went to 114 schools, sometimes doing two or three shows a day. “A great science demo is worth 1000 pictures,” he says.

In the midst of all this activity, he has written four science books for kids, as well as a number of resource books for teachers concerning how best to teach science. He regularly speaks at conferences and appears on Australian television — in particular, Catalyst, the nation’s leading science television program. But he started out on a fairly routine track.

Meerman received his bachelor’s degree in physics from Queensland University of Technology in 1993, and immediately started working at Laserdyne Technologies Pty Ltd, where he designed and manufactured multilayer optical coatings for gas and solid-state laser applications.

By 1995, the ivory tower was beckoning him back. He enrolled in and completed a graduate diploma in science communication at the Australian National University. As part of the coursework, Meerman toured the country with the Shell Questacon Science Circus, presenting science shows in schools. “The minute I did this I was hooked,” he says. As soon as he finished the program, “I started setting up my own business to keep visiting schools [and] doing demos for kids on my own. It was so cool to find a career that I love so much.”

But along with his company, he also had another interest he wished to chase — getting a Ph.D. As a surfer on Australia’s Gold Coast, he had a specific interest in sharks and decided to pursue a doctorate in physics with a focus on reducing shark attacks. He enrolled at Griffith University in 1997. “I approached [the university] to sponsor the science outreach business I was starting and they offered me a scholarship to do the Ph.D.,” he says. “And I said ‘heck yeah!’” As he dove into his studies, he also tutored in the university’s school of education to enhance his teaching techniques. As much as he enjoyed the doctoral program, presenting scientific demos was where his heart was, so after two years he decided to put his degree on hold and focus exclusively on his business.

Like many creatives, Meerman is always on the alert for his next playing field. So now he’s added another title to his lengthy resume: weight-loss researcher.

In 2013, Meerman found himself inclined to lose a little weight. He started exercising and “I had lost about six to seven kilograms in just a few weeks,” he says. But slimming down wasn’t enough — he had to know exactly there the weight was going as it left his body. “This is where being a physicist really helps. I love numbers and I’m such a geek. I couldn’t let it go,” he says. “So as I was losing weight, I wanted to know what proportion of that mass had come out of my lungs. I wanted to answer this precisely.”

When a person loses weight, it doesn’t disappear into a black hole. “Most people think that the fat is converted into energy or heat, but this violates the law of conservation of mass,” explains Meerman. People also mistakenly assume that the fat is somehow excreted in the feces or converted to muscle. So where does the fat go?

As he pondered this question, Meerman kept coming back to a Feynman quotation: “Everything is made of atoms.” He realized that most people “forget the ‘golden rule’ in chemistry — you have to have the same number of … [each kind of atom] at the beginning and the end” of any chemical process. So he set out to track every atom’s route as it passed through the body. For every jalapeño-bacon double cheeseburger a person gobbles, the excess carbs and protein (in a person’s diet) are converted to organic molecules called triglycerides (e.g., C55 H98 O6). The carbon and hydrogen atoms in triglycerides ultimately leave the body as CO2 and H2O.

But the triglycerides’ own oxygen atoms pose a puzzle. “Dietary fat is mainly [converted] to triglyceride before being stored” in fat cells, he explains. “The formula for the average dietary triglyceride will vary with the diet, as animal fats tend to be more saturated so slightly higher in hydrogen,” he explains. In addition to the water and carbon dioxide produced, each triglyceride molecule has six oxygen atoms that needed to be accounted for.

Meerman read up on the subject and discovered a paper from 1949 that described how “the oxygen atoms of body water and respiratory carbon dioxide are rapidly exchanged through the formation of carbonic acid,” he wrote. He realized that the leftover oxygen atoms wind up in CO2 and H2O, where “four are exhaled and two form water,” he says. “The results show that the lungs are the primary excretory organ for weight loss, and the water formed may be excreted in urine, feces, sweat, breath, tears, or other bodily fluids. For carbohydrate and triglyceride, there really is no other way to lose the mass of those carbon atoms,” he says.

“Of course, the other variable in the weight loss equation is consumption, so losing weight also requires eating less carbon atoms than are exhaled,” he notes. “It’s also true that the rate at which carbon atoms are exhaled depends on physical activity … but even if you sit perfectly still 24/7 or slip into a coma, the basal metabolic rate demands fuel and oxygen and produces CO2 and water so a living human is always losing weight and it can only be regained by eating (or via a drip if you happen to be in a coma). But I also agree that there is more to safe, healthy weight loss than just living and the benefits of physical activity extend far beyond weight loss.”

To be clear, “all I have done is quantify [a bit more precisely] what scientists had figured out and, in the process, I stumbled onto a gigantic misconception amongst doctors and health professionals,” he says.

Meerman completed all the calculations on his weight loss project and presented them as a TEDx talk in 2013. Early in 2014, Meerman convinced his Catalyst producers to let him put it together as a short feature for the program. “To give the story credibility, we needed a biochemist and we approached Andrew Brown, Head of and Professor in the School of Biotechnology and Biomolecular Sciences at the University of New South Wales who agreed to be interviewed and look over my work,” he shares. “The day after we filmed that story, Andrew emailed me suggesting we publish what I’d done. We decided that a survey of doctors, dietitians and personal trainers would be a great way to demonstrate the misconceptions and the need to change how this topic is taught.” The two worked together to refine the analysis and on December 16, 2014, The BMJ (formerly the British Medical Journal) published their paper.

Not surprisingly, the study generated worldwide media attention. It even got Meerman a book contract. But it also got him thinking about something else: going back for his Ph.D. Encouraged by Brown, Meerman is now pursuing a doctorate in science communication with an emphasis on how best to teach weight loss causes to both specialists and the public. “[We] hope to see [work] from the BMJ paper incorporated into biochemistry textbooks and explained in the lectures so that doctors, dietitians and biochemistry students don’t end up with the misconception that fat mass can be converted to energy,” he says.

He is conducting his doctoral research while continuing his science outreach performances. His business is booming, thanks to his ability to design and present fascinating demos. One of his favorites is related to his hobby of surfing, something he has done for 30 years. “About 10 years ago, I put together a talk on the science of surfing,” he explains. “It explains that when you catch a wave, it has its origins in the middle of the sun, where heat was generated to make a storm which makes the wave. It takes 170,000 years for the energy released at the core of the sun to reach its surface, and then 8 minutes to reach Earth. Then it might take another 3 months while the heat is absorbed into the Earth’s atmosphere and turned into a storm and then a wave. By the time the wave hits the beach for surfers to tackle, another week or so has gone by but all of that is negligible compared to those 170,000 years it took for the energy to escape the Sun.”

“So when you’re riding a wave, the energy that pushes you began 170,000 years ago,” he declares. “It’s beautiful and it’s thanks to physicists that we have this figured out. I’m so glad I studied physics. It’s amazing what we have done.”