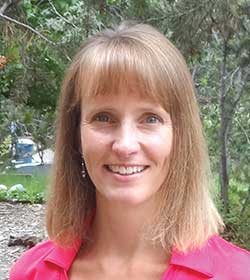 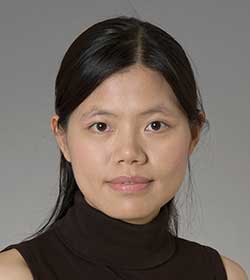 In July, APS announced the winners of its 2015 M. Hildred Blewett Fellowships. These awards help women to return to careers in physics research after an interruption. Blewett was an accelerator physicist who had worked at Brookhaven National Laboratory and CERN, and when she died in 2004, her bequest to APS endowed this award. Since then, the yearlong fellowships, which provide up to $45,000 for dependent care, salary, travel, equipment, and tuition and fees, have helped nearly 20 women get their physics careers back on track.

The APS Committee on the Status of Women in Physics selected two new fellows this year: Huey-Wen Lin, and Nicole Lloyd-Ronning. Two others, Monique Tirion and Ani Tshantshapanyan, are returning as fellows, after their selection last year.

Nicole Lloyd-Ronning
For some women, childcare can be an all-consuming task. So it was for Lloyd-Ronning, an astrophysicist who took ten years off to care for her three children. Now that the youngest is in grade school, she feels ready to jump back into research. “I knew ever since I was very young that I wanted to do astrophysics,” Lloyd-Ronning says. “I never stopped loving it — I just wasn’t finding the balance I wanted to when the kids came along.”

After studying physics and astronomy as an undergraduate at Cornell University, Lloyd-Ronning earned her Ph.D. from Stanford University. She then went on to a postdoc at the Canadian Institute for Theoretical Astrophysics in Toronto, during which she had her first child. She continued her research, working from home and part time as necessary. She then moved on to a second postdoc at Los Alamos National Lab (LANL) in New Mexico and had her second child.

But balancing work and home life left her feeling unsatisfied. “I was really bad at switching gears,” Lloyd-Ronning says. “I was just thinking about work all the time when I was at home.” So she decided to take a hiatus from research. All the while, Lloyd-Ronning says, she was still keeping up with the field, staying in touch with colleagues, and reading new papers on the arXiv every night.

Lloyd-Ronning studies gamma-ray bursts, extremely intense flashes of gamma rays that can occur when massive stars violently explode and collapse. A few years ago, she started dipping her toe back into research, working with one of her postdoc advisors at LANL. In her year as a Blewett Fellow, Lloyd-Ronning plans to use computational techniques to better understand how particles are accelerated in gamma-ray bursts and how they radiate. “The details of the physics are really not understood well,” she says.

The Blewett Fellowship will allow Lloyd-Ronning to commit her time to research again. “It’s giving me resources to be at work all day and find childcare when I need it for the kids,” she says.

Huey-Wen Lin
Physicist Huey-Wen Lin encountered a “two-body problem” that made it challenging to keep her career on track as well as her husband’s, especially when coupled with the demands of caring for their two children. As a visiting assistant professor at the University of California, Berkeley, Lin works when she can, but usually is able to make it into the office only one day a week. She says that the fellowship will help her get her children in full-time day care and get herself back to a regular work schedule.

In 2006, Lin received her Ph.D. in physics from Columbia University. This was already a complicated undertaking for Lin, who is from Taiwan. “No one in my whole family tree has ever lived as far as America,” she says, and it was a particularly difficult move for a daughter to make. “It’s more acceptable if a son tries to do something wild.”

She then went on to a postdoc at Jefferson Lab in Newport News, Virginia, before becoming a research assistant professor at the University of Washington (UW). Each time she moved, she says, her husband, also a physicist, would follow a year or two later. But the bouncing around wasn’t good for her husband’s career, she says — each time he’d have to start over again in a new place, sometimes leaving previous projects unfinished.

In July 2014, when Lin had her second child and her position at UW ended, things got more complicated. Her husband decided to take a job outside of physics, working for Google in Mountain View, California, where the couple now lives. Lin tried to keep up with research, but it was a challenge. Housing in the area turned out to be incredibly expensive, she says, and finding day care for an infant was very difficult. “A lot of things didn’t really work out as we had planned.

Lin’s research is in lattice gauge theory, using supercomputers to calculate the strong interactions between quarks and gluons. The work, she says, is relevant for providing standard model inputs for experiments at the LHC and also for low-energy precision experiments (e.g., measurements of the neutron electric dipole moment). Lin also plans to work in collaboration with Lawrence Berkeley National Laboratory, taking advantage of the supercomputer located there to enable the search for physics beyond the Standard Model.

Being selected for the Blewett fellowship means a lot, Lin says — and it’s not just about the money. “This fellowship gives me hope to move forward.” Now that she can work full time again, Lin hopes to make the final push to publish the research that she has accumulated in the past few years. And she’s optimistic about her prospects: “I think with just a couple more years I should be able to have a tenure-track position.”