Towards An Industrial Physics Community 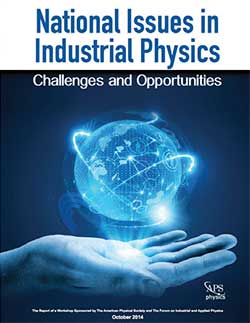 Physics plays a central role in modern industry because it is critical for explaining, extending, and predicting technology and its resultant products. Moreover, physics-inspired analysis leads to improved results in the non-technological aspects of industry as well as in technical matters. Some of the evidence for this is the strong demand from industry: more than 50% of persons with advanced physics degrees get their first permanent job in the private sector [1].

Given this importance of physics to and in industry, it is appropriate to ask what, if anything, needs to be done in

In this brief essay, I will discuss these three issues and highlight ideas by APS’s Forum on Industrial and Applied Physics (FIAP) as responses. Many of the ideas presented here result from the October 2014 APS/FIAP Workshop on National Issues in Industrial Physics [2].

Ensuring the flow of excellent physicists into industry

In working towards an advanced degree, a physicist learns how to formulate a significant physics problem, develops enough experimental and theoretical skills to solve the problem, and then presents the results to the community at large. In most cases, however, employers are looking for the ability to develop technical skills required for their industry rather than expecting a young physicist to come in ready to contribute immediately. Our present educational system does a very good job preparing the physics side of being a physicist.

What we have heard, however, from both industry and students alike, is that the non-technical aspects of working in industry are not well addressed. Young physicists receive little or no training in how industry operates, in how physicists work in industry, and on how to best prepare themselves for a career in industry. APS, FIAP, physics departments, and physics funding agencies all have roles to play. A number of opportunities have been identified.

Mentoring: A clearinghouse for potential mentors could arrange matches with students. At the same time, there need to be guidelines for effective mentorships and increased emphasis on the importance of being mentored. APS’s Local Links and other means can be used to recruit industrial physicists as mentors. Overall, the definition of relationship between mentoring and thesis advising need to be clarified.

Internships: Internships are useful in introducing physicists to industrial practice, so a clearinghouse for arranging placement is needed, and companies need to be recruited to participate. Intern opportunities have to be more widely publicized. Questions about how to cover costs and what happens when degrees are delayed need answers. Ultimately, there has to be recognition of the importance of internships to graduates going into industry.

Mid-career transitions: Early career physicists are not the only story. Mentoring and career information for those in mid-career is vital, and this could be aided by departmental lists of alumni willing to provide mentoring and support.

Industrial physics is a broad activity that ranges from large research centers in international corporations to one physicist supporting a medium-size but thriving company to entrepreneurs in the latest start-up, and everything in between. It includes basic research discovering new physics, solving physics-related technological problems, and using physics to develop and improve products in both traditional physics-related industries such as electronics, and rapidly emerging areas in nanotechnology and bio-medicine.

One common feature of today’s industrial physics environment is the breadth of interactions with diverse organizations, involvement in business practices, and collaborations with multiple scientific and technical disciplines. While this environment has been in place for decades, the last twenty years have seen significant changes due to the decentralization of research, the explosion of connectivity of people and organizations through the internet, globalization of industry, and a renewed entrepreneurial spirit within the US and abroad.

These changes have impacted industrial physics in many ways, some of which were highlighted in the National Issues Workshop including:

Intellectual property rights (IPR): Best general practices are emerging, especially in recognition of the cost involved in complex arrangements; while the Bayh-Dole Act that has facilitated patenting for individuals in academia and the government has been quite successful, developing IPR agreements between industry and academia and government continues to present barriers.

Industry-academia partnerships: The steady improvement in these partnerships can be further enhanced by clearer definition of roles (specifically industry’s need to turn investments in products) as well as use of best IPR practices (with recognition by universities that new or improved products usually require multiple patents for success).

The role of 21st Century industrial physics continues to be important, with a focus on its growing impact to industry and to society. The pace of technological advances seen in the 20th Century has not diminished in the first 15 years of this new century. Not only do industries such as electronics, telecommunications, and computing seem to advance with no slowdowns, other major industrial sectors are now drawing on the skills of physicists to understand, control, and manipulate physical processes to advance areas such as bio-medicine, transportation and energy, nanotechnology, and food production and delivery. As these industries take advantage of new physics, industrial physicists are finding themselves working on problems far afield from those of the 20th century.

The APS has been proactive in engaging with the industrial physics community including many programs to educate students about industrial careers, hiring an Industrial Physics Fellow to manage programs focused on industry, and continuing focus from APS leaders. The APS should build on these steps including the following proposals for concrete actions.

Timely access and networking on emerging ideas and innovation relevant for industrial physics: APS’s programs that provide information in a timely fashion through outstanding publications, national and local meetings, and informal networking opportunities need to be extended to meet the demands and realities of industrial physics. Industry is schedule driven, and few industrial physicists can afford to attend week-long, multi-disciplinary meetings. They need short, focused, and high payoff meetings, highlighting state-of-the-art work on topics of industrial interest. They need publications that focus on topics of broad industrial interest to keep them abreast of new ideas in fields outside their present focus. Many other societies do this successfully and APS is best positioned for providing such meetings to the industrial physics community.

Perhaps the most important message I can convey now is that the opportunity to advance industrial physics complements and builds upon the outstanding work the APS does in serving academic and private sector physicists today. APS has built a broad and effective leadership in academic physics that both serves the integrated needs of the diverse fields of physics and represents that community effectively to international organizations, national policy makers, and the university community.

Actions aimed at industrial physicists will require investment by APS, but given the large number of advanced degree physicists working in industry, there is a vast audience waiting to be served. As we acknowledge that science, technology, and solutions to societal problems are intricately intertwined, APS, as the world’s leading physics organization, is well positioned to serve the broadest possible physics community. Now is the time to effectively include the industrial physics community in this global organization.

John Rumble worked for the National Institute of Standards and Technology as Director of the NIST Standard Reference Data Program and Chief of the NIST Measurement Services Division. Rumble was Executive VP of Information International Associates and is now President of R&R Data Services, in Gaithersburg MD. Rumble is presently Past-Chair of the APS FIAP.