Physics in Iran After the Nuclear Agreement 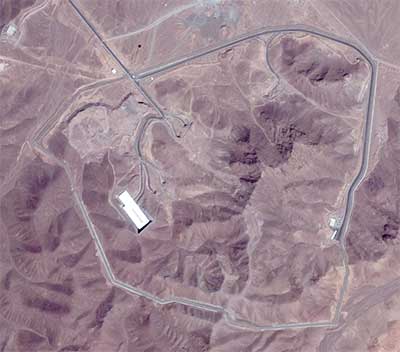 According to the agreement with Iran, the Fordow enrichment facility will be converted into an international research center.

The Obama administration’s nuclear deal with Iran may have repercussions far beyond its nuclear program — scientific research in the country could blossom in the wake of the agreement. The Joint Comprehensive Plan of Action, an agreement between Iran and the P5+1 (China, France, Russia, the United Kingdom, the United States, and Germany), announced in July, would remove sanctions on Iran in exchange for restrictions that aim to prevent Iran from acquiring nuclear weapons. But included in an annex of the deal is a call for increased scientific collaboration between the P5+1 and Iran. In addition, under the deal Iran will convert its Fordow uranium enrichment plant into an international physics center.

Sanctions imposed by the U.S., the United Nations, and other countries have significantly hindered research efforts of scientists within Iran. Obtaining necessary equipment and materials has been difficult, as has international travel to conferences and even publishing papers in foreign journals, says Reza Mansouri, an astronomer at the Institute for Research in Fundamental Sciences (IPM) in Tehran.  “We have had many occasions that people from different disciplines have received emails from editors that they cannot even review such papers coming from Iran.”

Now, Iranian physicists are anxious to expand their international collaboration, says Mansouri. Iran currently collaborates in two major international physics projects — the SESAME synchrotron light source (under construction in Jordan), of which Iran is a full member, and the Compact Muon Solenoid (CMS) experiment at CERN. “We scientists within Iran are ready for any collaboration,” Mansouri says, assuming that funding is available. “There are lots of very, very peaceful projects that could be done.”

“I think this opening is sure to happen,” Shahin Rouhani, a physicist at IPM and president of the Physics Society of Iran, wrote in an email. “In existing collaborations such as CERN, what I guess will happen is promotion of Iran’s role to a more involved one. But I expect that many new collaborations will start.”

One experiment is specifically listed in the deal as a possible option for future collaboration — ITER, the massive nuclear fusion project in Cadarache, France. Although leadership of ITER was not involved in the inclusion of this item in the deal, says ITER Director-General Bernard Bigot, “The ITER mission is by design global and inclusive.”

The agreement, Bigot says, has “opened the door” to the possibility of Iran joining ITER. “The very basic principle of the fusion program … is peaceful use of nuclear technology.” Any question about that commitment makes it difficult for a country to participate, he says.

There is much work to be done before Iran could begin to cooperate with ITER, including sorting out what contributions Iran could make to the project. “We know Iran has a long-standing fusion program … but we have no relationship so far with Iran in detail, so we don’t know if it could contribute and how much it could,” says Bigot.

At CERN, Iran is involved in the CMS experiment, as well as in studies for future accelerators like the Compact Linear Collider and the Future Circular Collider, says Patrick Fassnacht, CERN’s International Relations Advisor for Non-Member States in the Middle East and North Africa. “They are really very active on CMS and their contribution is very much appreciated,” he says. About 25 Iranian users are involved with projects at CERN. In addition, Iranians regularly attend CERN’s Summer Student Program and High School Physics Teacher Program.

Sanctions have thus far made it difficult for Iranian users to get visas and to transfer money to meet the financial obligations necessary to be a part of experiments at CERN. “This is hopefully now going to change,” says Fassnacht, adding that Iran’s role isn’t going to expand overnight. “This is something that will take quite some time.”

The Fordow facility, built under a mountain near the city of Qom, could be used for a variety of possible physics experiments, including a neutrino detector or a linear accelerator, Rouhani says. According to the deal, Iran will request “specific proposals for cooperative international nuclear, physics, and technology projects and will host an international workshop to review these proposals” with the goal of achieving collaborative projects within a few years.

But others are markedly more skeptical about the possibility of Fordow becoming an international research facility. “I wouldn’t bet my house on it,” says Hossein Sadeghpour of the Harvard-Smithsonian Center for Astrophysics, a former chair of the APS Committee on International Freedom of Scientists who has closely followed human rights issues in Iran.

A few major scientific facilities are currently under preparation within Iran, including the Iranian National Observatory, a 3.4-meter telescope planned to perch atop Mount Gargash in central Iran, and the Iranian Light Source Facility, under construction near Qazvin. These could see more international collaboration under the deal as well.

Despite the possible improvements for Iranian scientists under the deal, it will not address Iran’s human rights issues, says Sadeghpour, citing the case of imprisoned physicist Omid Kokabee as a recent example. Kokabee, an Iranian citizen, was studying at the University of Texas at Austin when he was arrested while visiting Iran in 2011, a punishment Kokabee said was connected to his refusal to participate in Iran’s military research.

“It’s a pity in my view that the inspection does not extend to where it really is important for the people of Iran, including the scientists — especially those who are languishing in Iranian prisons right now,” says Sadeghpour.