PhysTEC Coalition Grows to Over 300 Institutions 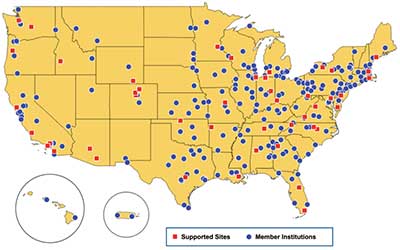 The map shows U.S. member institutions, which are located in 49 states, the District of Columbia and Puerto Rico (and there are a few international members as well). The map was also featured in the 2014 NSF Budget Request to Congress, which highlighted only 13 NSF-funded programs.

According to APS program staff, the Physics Teacher Education Coalition (PhysTEC) now has grown to over 300 member institutions. The Coalition is part of the PhysTEC project, a partnership between the APS and the American Association of Physics Teachers (AAPT) that works with college and university physics departments to increase the number of well prepared high school physics teachers.

With support from the National Science Foundation, APS member donations, and partner society contributions, the PhysTEC project has grown dramatically since its inception in 2001. Coalition college and university members can apply to become a “supported site” with funding from PhysTEC in order to build and improve undergraduate programs for future high school physics teachers. The project now has funded 46 sites to develop and carry out multi-year programs to strengthen physics teacher education.

The project has also increased its reach (see map). Coalition member institutions now include 40% of all physics departments in the U.S., and collectively educate over half of all new well-prepared U.S. physics teachers — defined as certified teachers who also have a degree in physics. To become a Coalition member institution, physics departments are asked to provide a letter of support from their chair and endorse the American Institute of Physics-Member Society Statement on the Education of Future Teachers. Membership benefits include reduced fees for conference attendance and eligibility for PhysTEC funding and awards. There is no charge for membership in the PhysTEC Coalition.

Each summer PhysTEC organizes the largest annual conference of physics educators in the country. There, participants share innovative ideas, learn from national leaders in the field, and promote awareness of the importance of improving physics and physical science teacher education. Next year’s conference will be held March 11 - 13, 2016 in Baltimore, MD.

Nearly all Coalition member institutions have sent one or more people to the above-mentioned PhysTEC conference or to PhysTEC workshops, and over 180 have applied for funding to develop PhysTEC programs. Monica Plisch, PhysTEC Project Director at APS, said that these numbers speak to the fact that “We have members who are critically engaged in teacher education, and not members in name only.”

Go to the PhysTEC website for more information about the program and the PhysTEC Join page to join the Coalition as a PhysTEC member institution.

The author is Outreach & Communications Specialist at the A.J. Drexel Autism Institute in Philadelphia. Until a few months ago, she was on the staff of the APS Department of Education and Diversity.