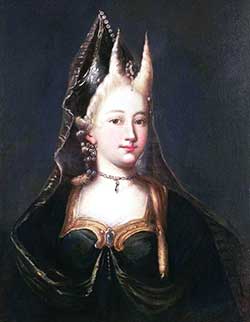 Portrait of Katharina Guldenmann, mother of Johannes Kepler, by an unknown painter in the 17th century.

In 1615, Lutherus Einhorn, a local magistrate of Leonberg, Germany, launched a series of witch trials, part of a witch-hunting hysteria then sweeping across Europe that claimed the lives of thousands of suspected sorcerers. In all, 15 local women were accused of witchcraft on Einhorn’s watch; eight were executed. Among those caught up in the hysteria was the mother of one history’s greatest astronomers: Johannes Kepler.

Born Katharina Guldenmann in Stuttgart (part of the Duchy of Württemberg) in 1546, she was raised by an aunt who was later burned at the stake for witchcraft. She married Heinrich Kepler, the son of a prominent merchant who served as mayor of the town of Weil. They had four children, one of whom was Johannes. It was not a happy marriage: The family fortune was in decline, exacerbated by Heinrich’s volatile temper and heavy drinking. Kepler described him as “a man vicious, inflexible … and doomed to a bad end.” Katharina’s temperament wasn’t much better. One historical account describes her as an “evil-tempered virago,” and Kepler wrote that she was “small, thin, swarthy, gossiping and quarrelsome, of a bad disposition.”

Heinrich bought a small tavern with what was left of his inherited wealth, and when that failed, he abandoned his family entirely, enlisting in the Austrian army for the war against the Turks. By then, Kepler had completed his studies at the University of Tübingen, settled in Linz, and gained the patronage of the Duke of Württemberg. He largely kept his distance from his difficult mother. Katharina supported herself in Leonberg as a local “wise woman,” concocting herbal potions for common ailments, “augmented” by spells and charms. Combined with her bad temper and family history, it is small wonder that town gossips soon labeled her a suspected witch.

Some historians have speculated that Kepler may even have contributed to the rumors by virtue of an allegory he wrote called Somnium (The Dream), arguably the earliest work of science fiction, given its description of a trip to the moon and speculation on what astronomy would be like if practiced on another planet. The characters include a fictional wise woman named Fiolxhilde who sells magic charms and communes with a demon in the moon — a strong resemblance to Katharina. The book wasn’t published officially until 1634, long after Katharina’s trial, but a footnote Kepler added to the main text suggests a copy of the manuscript-in-progress found its way to Tübingen around 1611, and he believed it had fueled suspicions of sorcery. “You would think a spark had fallen on dry wood,” he wrote. “My words had been taken up by dark minds which suspect everything else of being dark.”

Regardless of whether Kepler was correct in this assessment, the rumors about his mother intensified. In 1615, a local woman named Ursula Reingold, who had also fallen out with Kepler’s brother, Christoph, claimed that Katharina had poisoned her with a potion. After Einhorn — a cousin of Reingold’s as well as magistrate — attempted to force a confession at sword point while drunk, the fiery Katharina countered by suing her accuser for slander.

This was a dangerous gambit. The witch-hunting hysteria was at its height in Europe during Kepler’s day, so even a malicious rumor could put Katharina in potentially mortal peril. Standard court procedure for examining an accused witch usually involved severe torture to elicit a confession; all were presumed guilty until proven innocent, and those found guilty were summarily executed. Still a dutiful son, Kepler took the threat seriously enough to hire lawyers and take Katharina to Linz, commuting between the two cities. He set aside much of his scientific research for a time, although he still managed to complete his “harmonic theory,” published in 1619 as Harmonices Mundi.

The suit dragged on for several years, and when a new, less sympathetic judge took on Katharina’s case, Reingold took advantage of the switch to file a formal charge of witchcraft against her. By then Katharina had returned to Leonberg, determined to confront her accusers face to face. It proved a serious mistake. In August 1620, she was taken from her daughter’s home by court order and found herself in prison, accused of 49 counts of practicing witchcraft. Along with hired lawyers, Kepler mounted a very effective defense, penning the bulk of the exhaustive 128-page statement demolishing the prosecution’s arguments.

In the end, the judicial college at the University of Tübingen ruled that there was insufficient evidence on either side. Rather than order her subjected to torture to induce a confession, or release her outright, the college decided she should be shown the instruments of torture — hot irons, pincers, long needles, the rack, and a gallows used for drawing and quartering — with a graphic description of how each implement would be used. This was a practice known as territio verbalis meant to frighten the accused into a confession. But Katharina was made of sterner stuff. She stubbornly refused to confess, declaring, “Do with me what you want. Even if you were to pull one vein after another out of my body, I would have nothing to admit.” Then she recited a Pater Noster on her knees in a savvy display of piety.

Ultimately, Kepler’s defense was a success: Katharina was acquitted and released in October 1621 by order of the Duke of Württemberg, who ruled that her refusal to confess proved her innocence. An unrepentant Katharina promptly filed another lawsuit insisting Reingold should cover the costs associated with her trial as recompense for making a false accusation. That suit never went to trial; Katharina died the following year.