Working Together Towards a Future Circular Collider 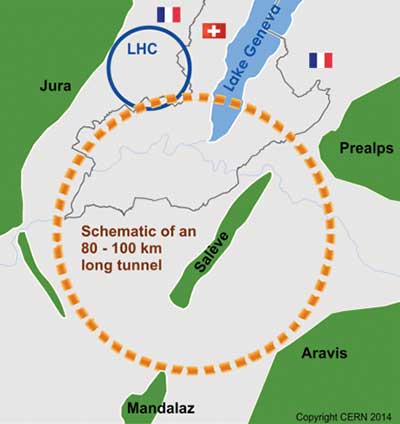 Sketch of a future 80-100 km tunnel in the Lake Geneva basin, which would allow for an energy-frontier hadron collider and an e+e- Higgs factory.

High energy physics has a century-long tradition of large international projects, providing collaboration models for numerous other fields of physics. The scale of its proposed next facility is likely to require an ever more global implementation, including international governance structures from the very outset. As scientists and policy makers alike seek ways to serve both national and international interests, I would like to inform APS members about the unfolding journey towards a future facility for particle physics.

In 2012 the Higgs boson was discovered by two experiments at CERN’s Large Hadron Collider (LHC), straddling the Franco-Swiss border. This discovery concluded almost 80 years of theoretical and experimental efforts. All elements of the so-called “Standard Model” of particle physics are now experimentally validated. However, the Standard Model is not a complete theory, as it does not provide any answers to numerous fundamental questions, such as the composition of dark matter, the cause of the universe’s accelerated expansion, the origin of the observed matter-antimatter asymmetry, the origin of neutrino masses, the reason for the existence of three families of quarks and leptons, the lightness of the Higgs boson, or the weakness of gravity. Operating at 7 and 8 TeV in 2010-12, the LHC has not yet uncovered any clear evidence for physics beyond the Standard Model. New information might come from proton-proton collisions at 13 and 14 TeV during the LHC Run-2 (2015-18), which has just begun, and from a future planned upgrade, the High Luminosity LHC (HL-LHC).

To go further we may need a new collider. Recognizing that circular proton-proton colliders are the only experimental tools available in the coming decades for exploring particle physics in the energy range of tens of TeV, the 2013 update of The European Strategy for Particle Physics requested CERN to “undertake design studies for accelerator projects in a global context with emphasis on proton-proton and electron-positron high-energy frontier machines … [which] should be coupled to a vigorous accelerator R&D programme, … in collaboration with national institutes, laboratories and universities worldwide” in order to be ready “… to propose an ambitious post-LHC accelerator project … by the time of the next Strategy update” (around 2019). In 2014 the International Committee for Future Accelerators stated that it “… supports studies of energy frontier circular colliders and encourages global coordination…”, and the U.S. Particle Physics Project Prioritization Panel (P5) confirmed that “A very high energy proton-proton collider is the most powerful tool for direct discovery of new particles and interactions under any scenario of physics results that can be acquired in the P5 time window [10-20 years] …”

In response to the 2013 European strategy update, the international Future Circular Collider (FCC) study was launched in February 2014. The goal of this global study, hosted at CERN, is to deliver, by the time of the next update of The European Strategy for Particle Physics, a conceptual design, along with a preliminary cost estimate, of a future highest-energy circular collider complex. The focus of the FCC study is a 100 TeV proton-proton collider (FCC-hh) in a new tunnel of 80 to 100 km circumference (see figure on page 7), with a peak luminosity of 5-30 x 1034 cm-2 s-1.

A key enabler of FCC-hh will be the availability of 16 T arc dipole magnets on an industrial scale. Over the last two decades Nb3Sn high-field-magnet technology has made great strides forward, thanks to ITER conductor development, U.S. and European R&D activities for an LHC upgrade, and the U.S. high-field magnet core development program. The HL-LHC, which is expected to be completed by about 2025, includes a few tens of Nb3Sn dipole and quadrupole magnets. The HL-LHC, thereby, prepares the technology base for the FCC-hh.

Since February 2014, a total of 58 institutes from 22 countries and four continents have joined the FCC collaboration, which also includes 8 U.S. universities. In parallel, a separate design effort hosted at IHEP Beijing aims at designing and constructing a similar, but domestic, Chinese collider with a smaller circumference of 50-70 km, called CEPC/SppC.

In March 2015, some 340 physicists, engineers, science managers, and journalists gathered in Washington, DC for the first annual meeting (FCC Week 2015) of the global FCC collaboration (APS News, May 2015). This meeting was jointly organized by CERN and DOE, sponsored by the IEEE, the European Community’s Enhanced European Coordination for Accelerator Research & Development FP7 EuCARD2 project, and several superconductor manufacturers. It covered all aspects of the study, e.g., designs of 100 km hadron and lepton colliders, infrastructures, technology R&D, experiments, and physics.

The Washington meeting began with an exciting presentation by U.S. Congressman Bill Foster, who encouraged the high-energy physicists in the audience to “never be shy in standing up for the unique nature of their field and never be afraid of big numbers.” A special session was devoted to FCC-related efforts in the U.S. Importantly, James Siegrist from the U.S. Department of Energy (DOE) pointed the way for aligning the high-field magnet R&D efforts at the four leading U.S. magnet laboratories (BNL, FNAL, LBNL, and the NHMFL at Florida State University) with the goals of the FCC study. An implementation plan for joint magnet R&D is being drawn up. First demonstrator magnets could be ready by 2017 or 2018, both in Europe and in the U.S.

The FCC Week 2015 also featured a plenary meeting of the FCC Gender Equality Working Group, where personal experiences of women physicists were reported from all around the world. At this meeting, Director of APS Education and Diversity Theodore Hodapp, representing both the APS committees on the status of women in physics and on minorities in physics, gave an intriguing presentation on how to support women physicists, which triggered lively discussions.

R&D progress will be reviewed at the next FCC Week, to be held in Rome from April 11 - 15, 2016. Further information about the global FCC study is available at the CERN FCC website, FCC H2020 Project page (EuroCirCol), and the CERN FCC Week 2015 page.

Frank Zimmermann, a senior scientist at CERN and an APS fellow, is the FCC deputy study leader. He also serves as the editor of the APS journal Physical Review Special Topics - Accelerators and Beams. Portions of this article previously appeared in CERN Courier (http://cerncourier.com/cws/article/cern/60865).