Comic-Con Embraces Science Amid the Fantasy 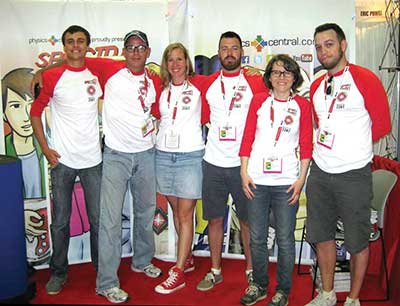 A squadron of Stormtroopers marches past; Wolverine flexes his muscles and bares his claws; and an oversized Care Bear gives out free hugs. Such sights are all in a day’s work for the APS Public Outreach team at Comic-Con International in San Diego, California, the annual convention that unites fans of comics, animation, science fiction, and related popular arts.

The convention, held this year from July 9 to 12, is wildly popular, with attendance topping 130,000 in recent years. But what is APS doing there? I tagged along with the APS Outreach team — on my first trip to Comic-Con — to find out.

APS has exhibited at Comic-Con for the past six years, to distribute and promote its line of physics comic books for middle school students. The APS flagship comic series is Spectra: The Original Laser Superhero, which now comprises seven issues. This year, for the first time, APS staff members participated in two panel discussions about educational comics at the convention.

Superhero Spectra is the alter ego of Lucinda Hene, a girl who discovers she has laser powers. She can cut metal, pass through glass, diffract — even play CDs! Spectra and her band of friends fight off bad guys such as the evil Miss Alignment, the authoritarian General Relativity, and the shy, elusive Quantum Mechanic (who can be in multiple places at one time), all while demonstrating the physics of optics, gravity, fluid mechanics, and more.

Each day of the event, we staffed the APS booth in the exhibit hall, handing out free physics comics to anyone who wanted them. This work was no picnic — I found myself working as fast as I could to keep throngs of kids, parents, and science lovers supplied with comics. According to Rebecca Thompson, head of APS Public Outreach and author of the Spectra comics, the crew gives out three comic books a minute on average. With so many people in attendance at the convention, fans pack the aisles of the exhibit hall — especially when Batman shows up and causes gridlock.

One might wonder whether superhero-worshippers are really the right crowd for physics outreach. But I was impressed with the conference-goers’ enthusiasm for science. As we hawked our wares, calling out, “free science comics!” many eagerly replied, “I love science!” and grabbed copies from our hands. A few readers even came back the next day to tell us how much they enjoyed them. And many attendees remembered APS from past years, proclaiming that their kids loved Spectra.

Science-themed events and panels abound at Comic-Con. This year, two panels about NASA research drew a crowd that packed a large room in the convention center. During the NASA panel “Turning Science Fiction into Science Fact,” there was thunderous applause from the audience as astrophysicist Amber Straughn of NASA’s Goddard Space Flight Center discussed the Kepler Space Telescope and the discovery of over 1,000 confirmed exoplanets. “NASA’s Kepler Telescope has completely revolutionized our understanding of planetary systems,” she said, to cheers from the crowd.

While passing out our comics, we not only met physics fans, but also full-fledged physicists in various stages of their careers — undergrads studying for their degrees, graduate students, professors, and even a scientist sporting an APS baseball cap. And science-loving kids drifted over to our booth, impressed with the cover of Spectra Issue #7, with Miss Alignment’s villainous face towering over Spectra and her crew. I quickly became convinced that the Comic-Con crowd enthusiastically embraces science.

The Spectra comics, as part of APS’s PhysicsQuest program, also come with a teachers’ guide and a kit of science experiments that let kids help Spectra fight the scientific evil-doers. During the convention, many teachers stopped by the booth and asked how they could get materials for their classrooms. (The answer: Go to PhysicsCentral at physicscentral.com and sign up for PhysicsQuest!) Each year, APS sends PhysicsQuest kits, with accompanying comics, to 15,000 middle school classrooms throughout the country.

Spectra is not all that APS offers. We also distributed copies of a PhysicsQuest comic about Nikola Tesla, which recounts his infamous feud with Thomas Edison during the War of the Currents that pitted AC against DC in the 19th Century.

APS participated in two panels on science and comics at Comic-Con. Thompson spoke at a session on “Comics for Impact: STEM Education.” The panel featured other prominent science comic book artists and writers, including Jorge Cham of PhD Comics, the popular web comic about grad student life.

Speaking to a room teeming with teachers of elementary, middle, high-school, and college students, Thompson discussed how the team designed Spectra to appeal to middle school-aged kids, and girls in particular. Thompson consulted with the staff of the website girl-wonder.org, which promotes positive representation of women in comics. Per their advice, Spectra is a multi-dimensional, believable middle school girl: She has a love interest; she has fights with her friends; and she’s not perfect. “Girls know when they’re being pandered to,” Thompson said, “so we tried not to do that.”

And the plot is the priority. Rather than awkwardly bombarding kids with science facts through the comic, “We really tried to make the story first and [then] make sure the physics was there,” Thompson said. The focus on the story keeps kids reading, she said, and it means “you’re going to learn without paying attention.”

A second panel, “Teaching Comics,” was part of the Comics Arts Conference, an academic conference that takes place during Comic-Con. This panel featured Thompson and David Ellis, illustrator for Spectra Issue #7. The pair discussed the teamwork necessary to communicate complex scientific principles through the medium of art and comics.

“We would try to sneak in ways to teach about the spectrum and optics visually instead of beating the kids over the head with a lot of word balloons,” Ellis said. To achieve that, the pair worked together on a daily basis, panel by panel, to make the art and the science align. “It really has to be done in a way where the script and the art merge together without being physically incorrect,” Thompson said.

Over four days, we distributed 7,000 comic books — more than two tons’ worth. “The fact that we are in 7,000 people’s hands now is really important,” Thompson says. “Comic-Con is a good place for us to bring science and bring some real superhero physics to people that already like comic books.”