A Passion for Problem Solving 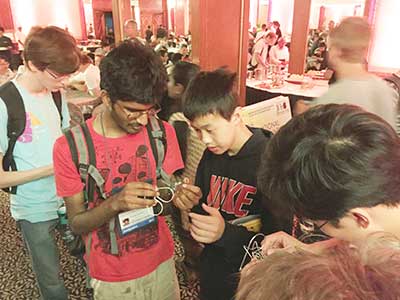 Imagine an international sport where eager high school students who share a passion for problem-solving compete with peers from around the world to demonstrate quick prowess and the ability to work independently to find solutions, and then gain recognition for their efforts; a program with provision for friendship and networking across national lines; a chance for students to do what they enjoy with others who are like-minded. That event is the International Physics Olympiad (IPhO), a competitive physics program first established among the former Soviet eastern block countries in 1967.

History of the Olympiads

The program was likely a response to the already successful International Math Olympiad that had begun eight years earlier, except that it would include both a theory-based examination and an experiment-based examination. The early physics Olympiads were relatively informal affairs that were organized by host nations somewhat hastily; now planning begins several years in advance.

By the time of the third Olympiad in 1969, a set of statutes had been drafted, and in 1972 the first western country, France, participated. There were rough patches: Efforts to politicize various academic Olympiads in 1977 into socialist events resulted in several years without any physics Olympiads. True international participation began when the Federal Republic of Germany hosted the IPhO, and the program has been hosted by various nations around the world every year since 1981.

In 1984 a permanent leadership program was established, and the Polish physicist Waldemar Gorzkowski became the first president of the IPhO. With the support of active members of the international board, he solved the problems of hosting the IPhO. Gorzkowski served as president of the IPhO until he passed away during the 38th IPhO in Iran, doing what he enjoyed most: supporting a friendly competition amongst the world’s best high school physics students.

The current IPhO comprises two five-hour exams: a theory exam that accounts for 60% of the total score, and an experimental exam that accounts for the remaining 40%. The allowed topics are drawn from a syllabus that is similar to algebra-based AP Physics. The use of calculus to solve problems is permitted, but is expected to be minimal. Each nation is allowed to bring five high school competitors and two leaders; the leaders help moderate the exams.

There are three theoretical questions, but the level of difficulty of the exam has grown over the past four decades to the point that each question is usually composed of many parts. These questions are set by the host country, but then debated and approved by the international board, which is composed of two leaders from each of the represented countries. These board discussions take place after the opening ceremony and after the leaders are removed from contact with the competitors.

Host countries are expected to draw from the entire syllabus, and often select problems of relevance to the host nation. In Vietnam, a problem was devoted to the physics of a rice pounder; in Denmark, one was devoted to Greenland. Sometimes the problems are farfetched, such as the problem from Singapore: What would be seen by a pinhole camera observing an object that is moving at relativistic speeds?

Preparing the experimental portion of the IPhO is probably the most difficult, requiring some 400 pieces of reliable and accurate experimental apparatus. Moreover, unforeseen problems with room lighting, room temperature, or floor vibrations do sometimes arise.

Some exams have had some particularly interesting experiments. In Mexico competitors assembled an optics table using cabinetry parts in order to measure the wavelength of light with a millimeter scale, taking advantage of the fringes produced when circularly diffracted light interferes with light diffracted off of a single straightedge. Korea developed a mechanical spring system that was enclosed in a tube. Competitors determined the spring constants of the springs and the mass of the contained ball with a series of measurements made possible with a timer and an optical detector. In Iran the task was examining the band gap in ferrous oxide using a mechanical spectroscope.

Participation of the United States

The United States began competing in 1986 and hosted the event in 1993. Since then, the U.S. has selected a Physics Team of 20 to 25 high school students that trains every year for a week to ten days at the University of Maryland, with additional training hosted by George Washington University during 2014. The American Association of Physics Teachers, the American Institute of Physics (AIP), and the AIP member societies (including APS) are the primary sponsors of the U.S. Team.

The U.S. Team selection process is managed through two exams: a 25-question multiple-choice exam that covers Newtonian mechanics is given to some 5,000 students. The top 400 or so are invited to sit a six-question long-answer exam that covers mechanics, thermodynamics, modern physics (including relativity), and electrodynamics. Exam questions are designed to test fundamental physics as well as problem-solving techniques, and often require the competitors to construct analytical, numerical, or graphical solutions. Ordinarily the top 20 eligible competitors are invited to the ten-day training camp.

As with most nations, the U.S. Team struggles with successful recruitment of underrepresented groups. Several years ago the U.S. Physics Olympiad publicized the names of all the competitors (rather than just those selected for the team). This public recognition increased interest in the exam, but also resulted in the challenging of exam scores by the competitors, their teachers, and their parents.

The demographics are interesting. First-generation Asians have a strong presence in the U.S. Team, a pattern that goes back at least a dozen years; often more than half of the team is composed of such students. The racial diversity of those current and former U.S. Team members who were not first generation Asians is much closer to that of the U.S. population as a whole, but the presence of African-American or Hispanic students, while not zero, is lower than the corresponding percentages of the population.

Approximately 20% of the almost five thousand initial test-takers are women, as are 16% of those on the U.S. Team. Since 2003 seven women have represented the United States at the IPhO.

A decade ago many of the U.S. Team members came from private high schools or special science high schools. This has changed: Several public high schools throughout the nation have active preparation programs and now regularly send a student or two to the training camp.

The training program for the U.S. team involves lectures, experiments, exams, and problem-solving practice. Exam questions are kept secret, as good questions can take weeks to develop despite the fact that it sometimes takes the students only minutes to figure out a correct path to the solution. Recently a coach commented that the internal training program had reached such a level that we were scouring the graduate level texts of Jackson and Goldstein to find problems that were hard enough to challenge these high school students.

Olympiad Outcomes and Differences in Preparation

A decade-long ranking of the top teams is independent of the choice of measure. China, Taiwan, and South Korea are ranked first through third. The U.S. is ranked fourth. Thailand and Russia are fifth and sixth. The most commonly used measure of national performance is the medal count: how many gold and silver medals each country wins. Less common is the aggregate point score of a team, and even less common is the aggregate ranking of the members of a team. Though the statutes of the IPhO are careful to point out that this is a competition among individuals, the team leaders, as well as the national organizations that back the training of the teams, do watch overall team performance and how it relates to other nations, in a friendly and supportive manner.

All five of the U.S. Team travelers have won medals every year since 1991. Though the U.S. Team has secured four golds and a silver on five different occasions, it has yet to acquire the coveted five-gold status, a privilege held only by China, Korea, Singapore, Taiwan, and Thailand. Still, U.S. Team travelers have won special recognition in top theory, top experiment, top overall, top female participant, and best solution.

One complaint about the program is that it does not train students to do real-world physics as a physicist would do it. This is true, but that is not the point of the program. Part of the training camp does develop problem-solving and laboratory skills outside the realm of the IPhO, but the focus is on competitive techniques. Even so, the playful conceptual problems that students enjoy are often similar to the problems posed by Newton, Einstein, or Feynman.

All members of the U.S. Team have fun doing physics: One of their favorite activities is competing against the coaches to solve “Fermi problems” — order-of-magnitude back-of-the-envelope physics calculations. It is, in fact, this playfulness that likely enables the U.S. Team to over-perform when compared to countries with considerably more extensive training programs.

The U.S. Team has 10 structured days of training followed by several weeks of independent study. The other top-performing nations have training programs that consist of a mix of supervised and independent work that takes place over the course of many months, and some for longer than a year.

The IPhO enables current high school students who love problem-solving to do just that: solve problems. The students relish rising to the challenge and engaging in intellectual competition, and the degree of difficulty of the problems has increased over the years to reflect that. Though the Olympiad is not a program for creating future Ph.D. physicists, U.S. Team members go on to careers in the STEM fields and also in economics. Former team members have become professors in a multitude of disciplines, Wall Street analysts, medical doctors, engineers in Silicon Valley, and yes, even physicists.

Paul Stanley is professor of physics at Beloit College and the holder of the Dobson Endowed Chair of Physics. He has also served as chair of the natural sciences since 2012. He has been involved with the U.S. Physics Team since 2003, and he has been academic director of the program since 2008.