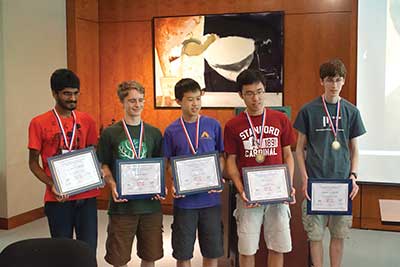 In a ceremony on May 27, 2015 at the American Center for Physics in College Park, Maryland, the American Association of Physics Teachers (AAPT) announced the group of five U.S. high school students who will travel to Mumbai, India, in July to participate in the 46th International Physics Olympiad.

Started in 1967, the Olympiad is an international competition among high school students from more than 60 nations. The national teams compete to solve challenging theoretical and experimental physics problems. U.S. participation began in 1986.

This year, team selection began in January with 4,300 high school students from around the country who took a rigorous physics test. Eventually, 20 students cleared the hurdles and arrived in College Park in early May for Physics Boot Camp, a two-week training and testing period. At the end of the boot camp, five students were selected for the traveling team headed to India.

Helping the students train are college students, postdocs, and professors who volunteer as coaches. “This collection of junior coaches has been phenomenal this year in terms of their engagement and involvement with the students,” said Paul Stanley, academic director of the team.

“It’s been a year’s worth of work by the students, and 10 hard-working days for the coaches and the academic director to bring the team to this point,” said Beth Cunningham, Executive Officer of AAPT.