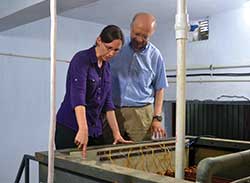 Susan Amrose and Ashok Gadgil in June 2015 inspect the ECAR reactor, a component of the 10,000-liter-per-day water treatment system being tested at Dhapdhapi High School in West Bengal State, India. 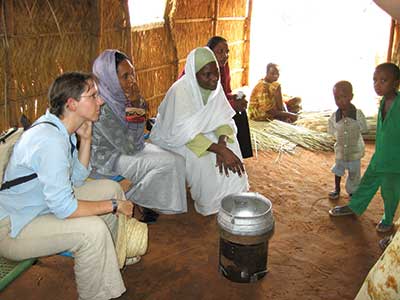 Susan Amrose gets users' impressions of an early version of the Berkeley-Darfur stove.

In spring 2006, Susan Amrose was almost ready to leave physics. She had come to the University of California, Berkeley in 2000 to get a Ph.D. in astrophysics, but more and more she felt her career was not helping people in the way she wanted. That changed when she walked into Ashok Gadgil’s Design for Sustainable Communities course.

Gadgil — a professor of civil and environmental engineering at Berkeley — had 25 to 30 students work in teams to design and build products to solve real public health or environmental problems in the developing world. Gadgil is a physicist by training; he is also deputy director of the Energy Technologies Area at the Lawrence Berkeley National Laboratory, up the hill from the university. He’s spent a career solving problems in some of the world’s poorest places. He created the design course to give students an opportunity to use their physics and engineering knowledge to improve lives and living conditions.

That opportunity was just what Amrose had been looking for. “I wanted to do rigorous science and engineering, and I wanted to use that immediately to actually create social impacts,” she said. Amrose joined Gadgil’s lab, earned her Ph.D. in physics, and is now a project scientist at Berkeley, focusing on developing technologies and moving them to market.

Since 2010, she has taught the course that initially inspired her. Together, Gadgil, Amrose, and other colleagues have developed technology that has improved the lives of millions of people.

“He’s very inspiring,” Amrose says. “There are a huge number of students, especially women, in engineering … [who are] looking for some way to apply it more immediately to some of the social problems that are happening now. They flock to Ashok’s lab.”

An Opportunity Not Lost

Born in 1950 in Mumbai, Gadgil has always loved the self-correcting nature of science, he says, and was especially drawn to physics because it could explain so many phenomena with relatively few rules.

After earning his bachelor’s degree from the University of Mumbai and his master’s from the Indian Institute of Technology, both in physics, he headed to U.C. Berkeley for a Ph.D. Gadgil worked on general relativity problems, but he began to feel something was missing. “All along it bothered me at some level that the place I came from, India, [might not] make it in terms of transitioning to a reasonably modern standard of living,” he says. “It seemed that it would be a lost opportunity to not try to see what I could do.”

Fortunately for Gadgil, Berkeley was home to Arthur Rosenfeld, a former particle physicist who went on to develop some of the first computer models for energy use in buildings. His work led to tremendous energy efficiency improvements in buildings in the U.S. and elsewhere. Seeking a way to use his physics background to have such direct social impacts, Gadgil joined Rosenfeld’s research group.

After getting his Ph.D. in physics, Gadgil moved immediately to Lawrence Berkeley Lab, where he has worked ever since. He applied his computational fluid dynamics background to indoor air quality problems, like how to manage radon and other toxic gases that can seep into houses. He developed leasing arrangements that made compact -fluorescent light bulbs affordable in the developing world. He also began working on issues related to drinking water. In the 1990s he developed a battery-powered technology to cheaply disinfect drinking water using ultraviolet radiation. The microwave oven-sized device became known as UV Waterworks, and Gadgil says this has improved the lives of more than five million people.

In 2000, Gadgil took on a new drinking water challenge: removing arsenic from groundwater. In India and Bangladesh, surface water is often contaminated with fecal matter, and municipal water treatment facilities do not exist in many places. Governments have responded by encouraging people to drill millions of rudimentary wells to tap groundwater. But this has created another problem: Much of the groundwater has natural levels of the toxic element arsenic that can be more than 100 times the concentration that the World Health Organization considers safe.

Here again, technology had been tried and failed. Gadgil himself developed a new kind of absorbent that could remove arsenic, and that could be manufactured with readily available materials. But he had trouble getting anyone interested in producing the absorbent at scale, because there was no clear way to recoup costs in a country where people are not used to paying for drinking water.

At about that time, Gadgil learned of a process developed in Nepal that uses iron oxide, i.e., rust, to bind to arsenic; the arsenic-iron mixture clumps and can then be filtered out. Amrose joined the project in 2006, and they discovered that they could create the rust on demand, as it were, by applying a small voltage to steel plates submerged in arsenic-laced water. In other words, the absorbent was “manufactured” directly in the water where it was needed. Amrose named the process electrochemical arsenic remediation, or ECAR.

In the lab, they tested a version of their device that could process up to three liters of water at a time. They found an Indian company, Luminous Water Technologies, to license the technology and develop it further; they have field-tested a 100-liter prototype. Amrose and Gadgil recently traveled to West Bengal, India to launch the demonstration of a device that can process 10,000 liters of water per day. If the device succeeds (a complete field test can take up to a year or more), they hope to move to large-scale manufacturing and distribution.

Sometimes Gadgil finds projects that need his expertise, and sometimes projects come to him. In 2004, someone from the U.S. Agency for International Development called Gadgil and told him about the dire situation of women in refugee camps in Darfur. These women, displaced from their villages by war, needed large amounts of firewood to cook on their traditional stone fireplaces. But wood is scarce in the semi-arid Sahel region, so the women had to look for it far beyond the camps’ borders, where they were exposed to increasingly frequent sexual violence and kidnappings.

Gadgil says he never intended to make a better cookstove, but he recognized that his years spent modeling airflow gave him the skills he would need to produce one that would burn less wood. He spent a year raising funds to travel to Sudan, along with several colleagues. They brought four fuel-efficient cookstoves that other groups had developed, and asked women in the refugee camps to try them out. None proved to be acceptable, and often the women rejected them for reasons that would have been impossible to know without visiting in person. For instance, the women insisted that they be able to see the flame, so they could know when to add wood. “All the time we paid attention to what the women cooks wanted,” Gadgil says.

Amrose and other students in Gadgil’s Design for Sustainable Communities course chose to take on the challenge and design a stove that met multiple criteria: cheap, made out of readily available materials, and culturally acceptable. The researchers returned to Darfur several times to field-test prototypes and improve the design. When they couldn’t find a nonprofit interested in manufacturing the stove (Gadgil notes that many nonprofits working in the developing world can be technophobic), Gadgil helped found one himself. In 2009, that nonprofit, called Potential Energy, began distributing a sheet-metal stove that can be produced for $20, stamped in India and shipped to Sudan, where local workers assemble it by hand. It uses less than half the firewood and produces far less black carbon and carbon dioxide emissions than the traditional fires the women were using, thereby improving women’s health in multiple ways.

Potential Energy has distributed more than 46,000 stoves, with plans to distribute another 5,000 by year’s end, and Berkeley researchers are modifying the design for use in other countries. The ultimate goal is to distribute millions of stoves around the world, Gadgil says, and make a dent in the commonly-cited figure of four million people who die every year from indoor air pollution. A study that measured stove use in a refugee camp with sensors and cell phone surveys found that among people given stoves, around three-quarters used the stoves to cook at least some of the time.

The development engineering community that Gadgil has seeded at U.C. Berkeley and Lawrence Berkeley Lab continues to grow. More than 200 students have now been through the design course; it has been fully subscribed every semester it has been offered. Course instructors bring in representatives from Bay Area firms to advise students and help them take on real-world engineering challenges. When Amrose tallied up the statistics on students who had taken the course from 2006 through 2014, she found that 55 percent were women. By comparison, women make up only around 14 percent of the working engineers in the U.S.

The university is now scaling up its efforts, offering both an undergraduate and a Ph.D. minor in development engineering. Gadgil co-directs Berkeley’s three-year-old Development Impact Lab, which supports dozens of engineering projects for the developing world, including ECAR, further stove design projects, and ReMaterials, a company Amrose collaborates with that produces modular, recycled roofing materials for use in low-income urban neighborhoods.

In 2014 Gadgil was inducted into the National Inventors Hall of Fame. And earlier this year, the APS Forum on Physics and Society gave Gadgil its Leo Szilard Lectureship Award, which his mentor Rosenfeld won 29 years ago. “In my mind, Ashok is the best heir apparent to Arthur Rosenfeld,” says Ramamoorthy Ramesh, who heads the Lawrence Berkeley Lab division where Gadgil works.

“We didn’t have any difficulty deciding that he deserved to win this award,” says Valerie Thomas, an industrial engineering professor at Georgia Institute of Technology who chaired the prize committee. She commends Gadgil for “really going out there and understanding the needs of people … . He really has a comprehensive approach, and he’s able to do that over and over again.”

The author is a freelance writer based in Mount Rainier, MD.