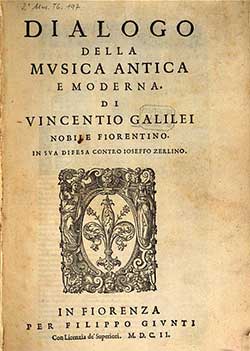 Music, math, and science have long enjoyed a symbiotic relationship, which led to the Renaissance notion that the motion of celestial bodies gave rise to the “music of the spheres.” Galileo Galilei’s scientific accomplishments may well have been influenced by his love of music, instilled in him by his father, Vincenzo, a musician and composer who brought an experimental sensibility to his study of music theory.

Very little is known about Vincenzo’s early life. Most accounts peg his birth around 1520, in a small Tuscan village, Santa Maria a Monte, near modern-day Florence. He showed a marked talent for music — the lute in particular — at a very young age and became an accomplished and well-regarded musician. At some point, prior to 1562, he moved to Pisa, and married the daughter of a Pisan noble family, Giulia Ammannati. His first child, the future astronomer Galileo, was born in 1564, followed by six siblings.

Vincenzo’s musical talent attracted the attention of a wealthy Florentine patron, Giovanni de Bardi, who established a regular salon for intellectual discussions at his palace, dubbed the “Camerata de Bardi.” The subjects included music theory, then considered part of the mathematical sciences, along with arithmetic, geometry, and astronomy. The Camerata’s interest in new musical directions would eventually lead to the early development of opera.

Music theory during this period relied on theorems drawn from geometry. This was at odds with a separate school of thought based on the work of the ancient Greek music theorist Aristoxenus, who insisted math had little to do with music, and one should rely on one’s senses to decide what music was most aesthetically pleasing. At the center of the conflict was a debate over the best mathematical ratios of the lengths of strings producing “consonances,” those sounds (like the octave) deemed most pleasing to the ear.

Since Vincenzo, despite his proficiency on the lute, had little theoretical training, Bardi sent him to Padua to study with one of the leading music theorists of the day, Gioseffo Zarlino. Zarlino embraced the Pythagorean tradition of diatonic tuning, and taught Vincenzo accordingly. But when the lutenist returned to Florence, he found a second teacher, a philologist named Girolamo Mei.

Mei introduced Vincenzo to the work of Aristoxenus, pointing out that the “equal temperament” approach adopted by practicing musicians to tune their instruments wasn’t consistent with the Pythagorean doctrine favored by theorists, which specified precise ratios for the intervals. Mei encouraged Vincenzo to test this for himself, tuning two different lutes, one to the requirements of equal temperament, and the other per the dictates of the theoreticians. Vincenzo did so, which convinced him that Mei was right.

The prevailing assumption at the time was that, just as the ratio of lengths of two identical strings with the same tension and mass per unit length, tuned an octave apart, would be 2:1, the ratio of the tensions of two identical strings of equal length, tuned an octave apart, would be 2:1 as well. Vincenzo decided to test this assumption with a simple experiment involving hanging weights from strings. He found that, in fact, the ratio of tensions was 4:1. This provided convincing evidence that, indeed, consonant sounds were not determined solely by abstract mathematical ratios.

Vincenzo was arguably one of the first to adopt an empirical approach to what is now modern acoustics research. His pursuit of these new ideas, so counter to those of his first mentor, led to a bitter falling out with Zarlino, particularly with the publication in 1581 of Vincenzo’s most influential book, Dialogo della musica antica et della moderna, which explicitly attacked Zarlino’s ideas.

The late science historian Stillman Drake argued persuasively that the elder Galilei conducted these experiments in 1588, at a time when his eldest son was living at home and tutoring local students in mathematics. He believes it likely that Galileo may have helped his father with the experiments, and hence Vincenzo influenced his son to pursue pragmatic experimentation in his science as a means of testing hypotheses. He certainly taught Galileo to play the lute, and Drake also suggested that Galileo’s love of music may have led to the astronomer’s formulation of the law of falling bodies.

Drake’s evidence stems from a page in Galileo’s laboratory notebooks detailing his experiments rolling balls of various masses down inclined planes. Some historical accounts report he measured the speed at which the balls rolled by timing his own pulse. But it is possible, according to Drake, that the idea to add moveable frets to his inclined plane as a ruler — thereby breaking up the balls’ continuous motion into discrete intervals of time — may have been inspired by the fret intervals on his lute’s fingerboards. The balls would bump up as they rolled over the frets, and click audibly when they hit the surface again, lending sound as well as sight to Galileo’s observations.

Vincenzo was first and foremost a musician and a composer, despite his scientific dabblings. In his lifetime, he composed two books of madrigals, along with music for both voice and lute, much of which anticipated early Baroque music  and very little of which survived. His co-invention of a musical style called monody is often cited as leading to the use of recitative in opera, and he also wrote a two-part treatise on counterpoint, which he finished in 1589. He died on July 2, 1591 in his beloved Florence.

1. Crease, Robert. The Prism and the Pendulum: The Ten Most Beautiful Experiments in Science. New York: Random House, 2004.

3. Pachetti, Marina Baldissera. “Turning music into sound: Vincenzo Galilei’s contributions to the history of acoustics,” The Journal of the Acoustical Society of America 135(4): (2014).