By Aihua Xie and Kennedy Reed 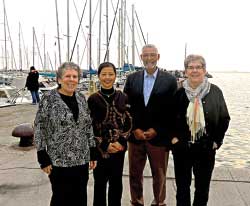 The 2015 Executive Council and Commission Chairs (C&CC) Meeting of the International Union of Pure and Applied Physics (IUPAP) was held April 24 - 26 at the International Center for Theoretical Physics in Trieste, Italy.

Please visit the IUPAP website for further information on IUPAP-sponsored conferences and awards. The nomination deadlines vary from one commission to another.