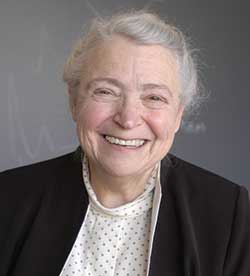 Mildred Dresselhaus, a professor at the Massachusetts Institute of Technology and past president of the American Physical Society, has become the first woman to receive the IEEE Medal of Honor, in recognition of her “leadership and contributions across many fields of science and engineering.”

The medal is the most prestigious award of the IEEE (formerly the Institute of Electrical and Electronic Engineers) and was created in 1917 to honor individuals who have made “a particular contribution that forms a clearly exceptional addition to the science and technology of concern to IEEE.” Previous recipients have included physicists such as Nobel laureates Charles Townes, John Bardeen, and Norman Ramsey.

Dresselhaus, Emerita Institute Professor of Electrical Engineering and Physics at MIT, has focused her research on the properties and applications of carbon, including fullerenes, nanotubes, and graphene. She was president of APS in 1984 and currently serves on the editorial board of Physical Review Applied, published by the APS.

In 2012 she received the U.S. Department of Energy Enrico Fermi Award, followed quickly by the 2012 Kavli Prize. In 2014, Dresselhaus was awarded the National Medal of Honor, the United States' highest civilian honor, at a White House ceremony. Dresselhaus has also won the APS Dwight Nicholson Medal for Outreach and the APS Oliver E. Buckley Condensed Matter Physics Prize.

IEEE will presented the award to Dresselhaus on June 20, 2015 at its annual honors ceremony in New York City.