Philanthropy Led by a Physicist 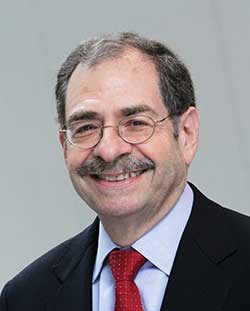 In an economic and scientific funding universe that seems about to collapse on itself, there are some wormholes that might lead to novel sources for research capital. Over the last two years, the Science Philanthropy Alliance (SPA), a partnership of six of the world’s leading scientific foundations, has emerged as a potential supernova with a distinct mission: It seeks to increase philanthropic annual giving for science by $1 billion within 5 years.

At the helm of this endeavor is physicist Marc Kastner, who served as physics department head and dean of science at the Massachusetts Institute of Technology (MIT). Kastner is well qualified to take on the challenge of expanding fundamental research funding, having spent years building up the MIT research programs and portfolios. He was nominated by President Barack Obama to serve as Director of the Office of Science at the Department of Energy, but he was not confirmed. In early 2015, the heads of the six foundations came calling with an offer he knew he couldn’t refuse: a chance to lead the fledgling SPA organization and make a unique global impact on research funding.

SPA comprises the Howard Hughes Medical Institute, The Kavli Foundation, the Gordon and Betty Moore Foundation, the Research Corporation for Science Advancement, the Alfred P. Sloan Foundation, and the Simons Foundation. It was initiated in 2013, as “The groups asked what they could do as a unit that they couldn’t do as individual [organizations], especially given the sad state of support from the federal government,” says Kastner.

The resulting discussions led to the creation of SPA and a new dawn for philanthropy, as the Alliance hopes to leverage its assets, strengths, and brands to raise even more money for research. Its strategy is almost unassuming: “We aim to educate high-net-worth individuals and other existing foundations about the value and importance of basic science and the role foundations have in making a difference,” he explains. With federal government support for basic science lower than it’s been since the 1960s, he adds, philanthropy alone can’t fill that gap. Furthermore, individual donors want to know that their support makes a difference and is not used for administrative costs.

To achieve this aim, SPA partners with major universities to encourage and enable them to launch endowments for basic science. Then the Alliance brokers deals between donors and the universities to help them grow those endowments, and this money stays on campus; but the money is steered to the campus in the first place by the power of the Alliance and the reputation of its foundations. “We can tell donors there is a place to go to send their money,” says Kastner. “This creates quick targets for philanthropists to invest their money in universities,” which in itself is highly significant, given that “The process is very slow to raise money for basic research,” and given the challenges of courting donors for projects that might not even exist yet.

One of Kastner’s major goals is to share success stories about funded research and build a catalog of scientific areas that need support, where donors can make a difference. “We all have to work at this,” he implores his physicist colleagues. “Given the state of politics, the hope of getting [federal] funding levels back up is not great. So we need to educate philanthropists …” about the essential nature of fundamental research in discovery-driven or seemingly blue-sky subjects.

Knowing Kastner’s own philosophy about research, it’s not hard to imagine why he would take on this challenge. “Support of basic science is something I’ve been passionate about my whole career,” he says. Shortly after he graduated in 1972 with his Ph.D. in physics, he had a job lined up at MIT. By June of 1973, he received his first NSF award. “I was not even 28 years old, and was an assistant professor with a grant,” he recalls. “I was enormously lucky to start my job when there was federal funding.” Currently, the average starting age of MIT assistant professors is in the mid-30s, and the average age of a first-time NIH grantee is 42, he notes. Today, “… it’s so much harder to do basic science.”

As it happened, Kastner almost wasn’t a scientist himself. “My father was a physicist, so I decided at an early age physics was something I would never do, because he was so much smarter than me,” he recounts with a laugh. “So I decided to become a lawyer.” But his dad suggested that he at least major in science so “if I can’t get into law school, at least I would get a job.” Kastner studied chemistry as an undergraduate at the University of Chicago and by the time he took E & M, he was smitten with physics. In fact, he applied only to graduate programs in physics and was accepted by the University of Chicago.

He positively gushes when discussing his chosen field. “I love physics. It’s beautiful. You can describe nature with mathematics and understand it in a quantitative way.” And studying the subject has enabled him to be a successful manager, he stresses. “When you’re an experimental physicist, especially as soon as you become a faculty member, you are running a small business,” he notes. From hiring people to keeping track of every dollar gained and spent, “Those skills are the most important in taking on administrative responsibilities. To be a successful physicist, you have to keep your eye on the ball and readjust your strategy depending on what nature tells you, and those experiences help in administration as well.”

Kastner counts his service to early career faculty and postdocs as some of his most proud accomplishments thus far. “Most faculty avoid [administration] like the plague,” he says, “but I got satisfaction out of it because I could see how I could help faculty, especially young faculty.” He is also very concerned about the plight of postdocs and the dearth of academic jobs available to talented early career scientists.

But at the wheel of SPA, Kastner is in a new position to potentially help many more early- and mid-career physicists than he ever could have at MIT. The Alliance is good news for the physics community, he says, because it will create more opportunities for both financial support and publicity for fundamental investigations in discovery-driven experimental and theoretical physics. “I believe that by telling the stories of how basic research done in the past has made our lives better, and by telling stories about the exciting opportunities for research right now, physicists and other scientists can convince philanthropists to help support our basic research enterprise, which is critical to our future.”

Alaina G. Levine is president of Quantum Success Solutions, a science career and professional development consulting enterprise. She can be contacted through www.alainalevine.com, or followed on twitter @AlainaGLevine.