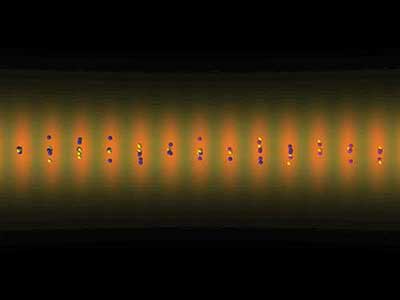 Among other things, the Joint Institute for Quantum Information studies how trapped atoms (shown here in an artist's depiction) interact with each other and the outside world. The results are key to atomic clocks and quantum computers.

Founded in 2006, the Joint Quantum Institute (JQI) at the University of Maryland (UM) is a superposition of research approaches. The collaboration between UM and the National Institute of Standards and Technology (NIST) brings together the freedom of academia with the resources of a federal agency. Among other projects, the researchers there are laying the groundwork for the first generation of quantum computers.

“JQI is a joint government and academic effort,” said Jake Taylor, a theorist at NIST and also a JQI Fellow. “What that means practically is you get all the benefit of all the long-term thought and freedom of research from the academic side with all the resources of the government side.”

Understanding and controlling quantum phenomena permeates the research done throughout JQI. Researchers at the institute both explore fundamental physics and develop its practical applications. For example, quantum mechanics promises to revolutionize computing, cryptography, and communication in the coming decades. Federal and academic researchers at JQI are working side by side to bring about this revolution.

“You started with two separate institutions, which both had a critical mass of quantum researchers,” said Taylor. “If you suddenly get them all in the same room on a regular basis, tremendous things can happen.”

It’s not the first institution to blend federal resources and an academic setting. JILA, the collaboration between NIST and the University of Colorado Boulder, served as the model for JQI.

JILA was originally founded in the 1960s as an astrophysics lab, but has since expanded its purview to include research in atomic, molecular, quantum and optical physics, as well as biophysics. In 2001, researchers at JILA shared the Nobel Prize in Physics for creating the first Bose-Einstein condensate in an alkali gas.

Thus far, researchers at JQI have kept their attention in the quantum realm. “It’s an institute that is focused on a second revolution in quantum mechanics and its application to society and technology,” said Chris Monroe, a physicist at UM and a fellow at JQI. “We’re based on a university model, so we do curiosity[-driven] research. But it has a mission.”

This focus has made JQI a research powerhouse. In the ten years since its founding, it has become one of the top places in the country for quantum science, attracting some of the best physicists in the field. NIST’s Nobel laureate William Phillips helped set it up. In 2015, JQI Fellow Gretchen Campbell won the APS Maria Goeppert Mayer Award. Chris Monroe an Ian Spielman  each received a recent APS prize or award. “We’re competing with the big leagues,” Monroe said.

UM and NIST have had a long history of building individual partnerships with each other. In 2003, the two institutions signed an agreement to formally increase their collaborative efforts, yielding the UM-NIST Center for Nano Manufacturing and Metrology in 2005. One year later, NIST and the university established JQI, modeled on JILA, to capitalize on Maryland’s existing strong quantum and atomic research programs.

JQI has grown considerably since then. Though originally envisioned to host about twenty scientists, today there are 33 fellows and more than 140 faculty and graduate students working at JQI, split about evenly between NIST and the university.

“From the NIST side it provides a great source of young and eager scientists,” said Steve Rolston, JQI co-director. “From the Maryland side, it’s almost like having another 15 faculty members.”

Bringing together the two institutions lets their different approaches complement each other.

“There are different cultures between national labs and universities,” Rolston said. “In this case it’s not very extreme. NIST has a mission. When they do research it’s relevant to their mission. When the university does research, it’s because they find it interesting.”

NIST isn’t the only federal agency with an interest in quantum computing and a hand in JQI. The promise of quantum encryption and unbreakable codes has long attracted the interest of the National Security Agency (NSA).

“You usually think of the NSA as sort of spooky, but my experience with them is far from that,” Monroe said. “They have open research in certain fields and this is one of them, quantum information.”

Working through the long-established Laboratory for Physical Sciences (LPS) adjacent to campus, NSA’s research done through JQI is all open and unclassified. One of JQI’s 33 fellows is from the LPS and ten of the 100 labs associated with the JQI are run through the LPS. The labs primarily, but not exclusively, focus on the applications side of quantum information.

“It’s the NSA’s little physical science connection to the outside world,” Rolston said.

Bringing together agencies and academia has led to collaborative work. For instance, last year JQI linked up with Lockheed Martin and established a division to develop workable quantum computers.

On its own, Monroe’s group proposed a modular, scalable computer architecture with ions entangled in separate traps. But Monroe is quick to point out that while researchers at JQI are broadly working towards a quantum-computing goal, JQI is at its core focused on exploring fundamental science. “We’re not a quantum computing center,” Monroe said. “We are a quantum physics center.”